In fluid dynamics, the radiation stress is the depth-integrated – and thereafter phase-averaged – excess momentum flux caused by the presence of the surface gravity waves, which is exerted on the mean flow. The radiation stresses behave as a second-order tensor.

The radiation stress tensor describes the additional forcing due to the presence of the waves, which changes the mean depth-integrated horizontal momentum in the fluid layer. As a result, varying radiation stresses induce changes in the mean surface elevation (wave setup) and the mean flow (wave-induced currents).

For the mean energy density in the oscillatory part of the fluid motion, the radiation stress tensor is important for its dynamics, in case of an inhomogeneous mean-flow field.

The radiation stress tensor, as well as several of its implications on the physics of surface gravity waves and mean flows, were formulated in a series of papers by Longuet-Higgins and Stewart in 1960–1964.

Radiation stress derives its name from the analogous effect of radiation pressure for electromagnetic radiation.

The radiation stress – mean excess momentum-flux due to the presence of the waves – plays an important role in the explanation and modeling of various coastal processes:[1][2][3]

For uni-directional wave propagation – say in the x-coordinate direction – the component of the radiation stress tensor of dynamical importance is Sxx. It is defined as:[4]

where p(x,z,t) is the fluid pressure,

is the horizontal x-component of the oscillatory part of the flow velocity vector, z is the vertical coordinate, t is time, z = −h(x) is the bed elevation of the fluid layer, and z = η(x,t) is the surface elevation. Further ρ is the fluid density and g is the acceleration by gravity, while an overbar denotes phase averaging. The last term on the right-hand side, ½ρg(h+η)2, is the integral of the hydrostatic pressure over the still-water depth.

To lowest (second) order, the radiation stress Sxx for traveling periodic waves can be determined from the properties of surface gravity waves according to Airy wave theory:[5][6]

where cp is the phase speed and cg is the group speed of the waves. Further E is the mean depth-integrated wave energy density (the sum of the kinetic and potential energy) per unit of horizontal area. From the results of Airy wave theory, to second order, the mean energy density E equals:[7]

with a the wave amplitude and H = 2a the wave height. Note this equation is for periodic waves: in random waves the root-mean-square wave height Hrms should be used with Hrms = Hm0 / √2, where Hm0 is the significant wave height. Then E = ​1⁄16ρgHm02.

For wave propagation in two horizontal dimensions the radiation stress

is a second-order tensor[8][9] with components:

With, in a Cartesian coordinate system (x,y,z):[4]

are the horizontal x- and y-components of the oscillatory part

of the flow velocity vector.

To second order – in wave amplitude a – the components of the radiation stress tensor for progressive periodic waves are:[5] 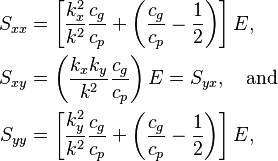 where kx and ky are the x- and y-components of the wavenumber vector k, with length k = |k| = √kx2+ky2 and the vector k perpendicular to the wave crests. The phase and group speeds, cp and cg respectively, are the lengths of the phase and group velocity vectors: cp = |cp| and cg = |cg|.

The radiation stress tensor is an important quantity in the description of the phase-averaged dynamical interaction between waves and mean flows. Here, the depth-integrated dynamical conservation equations are given, but – in order to model three-dimensional mean flows forced, or interacting with, surface waves – a three-dimensional description of the radiation stress over the fluid layer is needed.[10]

which is exact for progressive waves of permanent form in irrotational flow. Above, cp is the phase speed relative to the mean flow:

The mean horizontal momentum M, also per unit of horizontal area, is the mean value of the integral of momentum over depth:

with v(x,y,z,t) the total flow velocity at any point below the free surface z = η(x,y,t). The mean horizontal momentum M is also the mean of the depth-integrated horizontal mass flux, and consists of two contributions: one by the mean current and the other (Mw) is due to the waves.

Observe that first the depth-integrated horizontal momentum is averaged, before the division by the mean water depth (h+η) is made.

The equation of mean mass conservation is, in vector notation:[14]

with u including the contribution of the wave momentum Mw.

The equation for the conservation of horizontal mean momentum is:[14]

where u ⊗ u denotes the tensor product of u with itself, and τw is the mean wind shear stress at the free surface, while τb is the bed shear stress. Further I is the identity tensor, with components given by the Kronecker delta δij. Note that the right hand side of the momentum equation provides the non-conservative contributions of the bed slope ∇h,[16] as well the forcing by the wind and the bed friction.

In terms of the horizontal momentum M the above equations become:[14]

In a Cartesian coordinate system, the mass conservation equation becomes:

with ux and uy respectively the x and y components of the mass transport velocity u.

The horizontal momentum equations are:

where ":" denotes the double-dot product, and ε denotes the dissipation of mean mechanical energy (for instance by wave breaking). The term

is the exchange of energy with the mean motion, due to wave–current interaction. The mean horizontal wave-energy transport (u + cg) E consists of two contributions:

In a Cartesian coordinate system, the above equation for the mean energy E of the flow fluctuations becomes:

So the radiation stress changes the wave energy E only in case of a spatial-inhomogeneous current field (ux,uy).