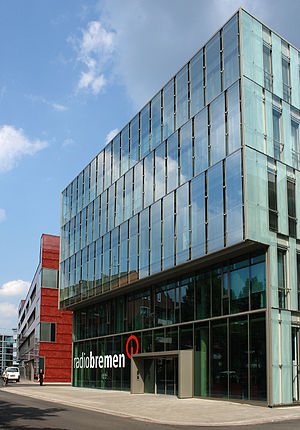 Radio Bremen (RB), Germany's smallest public radio and television broadcaster, is the legally mandated broadcaster for the city-state Free Hanseatic City of Bremen (which includes Bremerhaven). With its headquarters sited in Bremen, Radio Bremen is a member of the consortium of German public broadcasting organizations, ARD.

Radio Bremen began transmitting a daily programme on AM radio on 23 December 1945 under the post-war occupation of Germany by the Allied powers. Although located in an enclave entirely surrounded by the British Zone of occupation, the city of Bremen belonged, together with Bremerhaven, to the American Zone, and radio broadcasting was therefore overseen by the American command. In 1949 Radio Bremen was chartered to be the public-law broadcaster serving the city-state Free Hanseatic City of Bremen and became a founding member of ARD in 1950.

Every household in Germany is lawfully bound to pay 17,50 Euro per month as so called "Rundfunkbeitrag" (broadcast contribution).[1] These fees are not collected directly by Radio Bremen but by the Beitragsservice von ARD, ZDF und Deutschlandradio that is a common organisation of ARD, its members, ZDF and Deutschlandfunk.