Radiography is an imaging technique that uses electromagnetic radiation other than visible light, especially X-rays, to view the internal structure of a non-uniformly composed and opaque object (i.e. a non-transparent object of varying density and composition) such as the human body. To create the image, a heterogeneous beam of X-rays is produced by an X-ray generator and is projected toward the object. A certain amount of X-ray is absorbed by the object, which is dependent on the particular density and composition of that object. The X-rays that pass through the object are captured behind the object by a detector (either photographic film or a digital detector). The detector can then provide a superimposed 2D representation of all the object's internal structures.

In tomography, the X-ray source and detector move to blur out structures not in the focal plane. Conventional tomography is rarely used now having been replaced by CT. Computed tomography (CT scanning), unlike plain-film tomography, generates 3D representations used for computer-assisted reconstruction.

Further information: History of the X-ray

Radiography's origins and fluoroscopy's origins can both be traced to November 8, 1895, when German physics professor Wilhelm Conrad Röntgen discovered the X-ray and noted that, while it could pass through human tissue, it could not pass through bone or metal.[1] Röntgen referred to the radiation as "X", to indicate that it was an unknown type of radiation. He received the first Nobel Prize in Physics for his discovery.[2]

There are conflicting accounts of his discovery because Röntgen had his lab notes burned after his death, but this is a likely reconstruction by his biographers:[3][4] Röntgen was investigating cathode rays using a fluorescent screen painted with barium platinocyanide and a Crookes tube which he had wrapped in black cardboard to shield its fluorescent glow. He noticed a faint green glow from the screen, about 1 meter away. Röntgen realized some invisible rays coming from the tube were passing through the cardboard to make the screen glow: they were passing through an opaque object to affect the film behind it.[5] 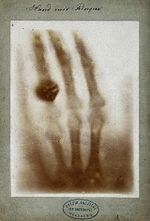 The first use of X-rays under clinical conditions was by John Hall-Edwards in Birmingham, England on 11 January 1896, when he radiographed a needle stuck in the hand of an associate.[6] On 14 February 1896, Hall-Edwards also became the first to use X-rays in a surgical operation.[7]

The United States saw its first medical X-ray obtained using a discharge tube of Ivan Pulyui's design. In January 1896, on reading of Röntgen's discovery, Frank Austin of Dartmouth College tested all of the discharge tubes in the physics laboratory and found that only the Pulyui tube produced X-rays. This was a result of Pulyui's inclusion of an oblique "target" of mica, used for holding samples of fluorescent material, within the tube. On 3 February 1896 Gilman Frost, professor of medicine at the college, and his brother Edwin Frost, professor of physics, exposed the wrist of Eddie McCarthy, whom Gilman had treated some weeks earlier for a fracture, to the X-rays and collected the resulting image of the broken bone on gelatin photographic plates obtained from Howard Langill, a local photographer also interested in Röntgen's work.[8]

X-rays were put to diagnostic use very early; for example, Alan Archibald Campbell-Swinton opened a radiographic laboratory in the United Kingdom in 1896, before the dangers of ionizing radiation were discovered. Indeed, Marie Curie pushed for radiography to be used to treat wounded soldiers in World War I. Initially, many kinds of staff conducted radiography in hospitals, including physicists, photographers, doctors, nurses, and engineers. The medical speciality of radiology grew up over many years around the new technology. When new diagnostic tests were developed, it was natural for the radiographers to be trained in and to adopt this new technology. Radiographers now often do fluoroscopy, computed tomography, mammography, ultrasound, nuclear medicine and magnetic resonance imaging as well. Although a nonspecialist dictionary might define radiography quite narrowly as "taking X-ray images", this has long been only part of the work of "X-ray departments", radiographers, and radiologists. Initially, radiographs were known as roentgenograms,[9] while skiagrapher (from the Ancient Greek words for "shadow" and "writer") was used until about 1918 to mean radiographer.

A plain radiograph of the elbow.
For more details on this topic, see Radiographic equipment.

A number of sources of X-ray photons have been used; these include X-ray generators, betatrons, and linear accelerators (linacs). Today, the most powerful and brilliant sources of X-rays (from soft to hard X-rays) are synchrotron sources. For gamma rays, radioactive sources such as 192Ir, 60Co or 137Cs are used.

A range of detectors including photographic film, scintillator and semiconductor diode arrays have been used to collect images.

X-ray photons used for medical purposes are formed by an event involving an electron, while gamma ray photons are formed from an interaction with the nucleus of an atom.[10] In general, medical radiography is done using X-rays formed in an X-ray tube. Nuclear medicine typically involves gamma rays.

The types of electromagnetic radiation of most interest to radiography are X-ray and gamma radiation. This radiation is much more energetic than the more familiar types such as radio waves and visible light. It is this relatively high energy which makes gamma rays useful in radiography but potentially hazardous to living organisms. 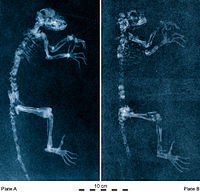 Radiographs of the Darwinius fossil Ida.

The radiation is produced by X-ray tubes, high energy X-ray equipment or natural radioactive elements, such as radium and radon, and artificially produced radioactive isotopes of elements, such as cobalt-60 and iridium-192. Electromagnetic radiation consists of oscillating electric and magnetic fields, but is generally depicted as a single sinusoidal wave. While in the past radium and radon have both been used for radiography, they have fallen out of use as they are radiotoxic alpha radiation emitters which are expensive; iridium-192 and cobalt-60 are far better photon sources. For further details see commonly used gamma-emitting isotopes.

Gamma rays are indirectly ionizing radiation. A gamma ray passes through matter until it undergoes an interaction with an atomic particle, usually an electron. During this interaction, energy is transferred from the gamma ray to the electron, which is a directly ionizing particle. As a result of this energy transfer, the electron is liberated from the atom and proceeds to ionize matter by colliding with other electrons along its path. Other times, the passing gamma ray interferes with the orbit of the electron, and slows it, releasing energy but not becoming dislodged. The atom is not ionised, and the gamma ray continues on, although at a lower energy. This energy released is usually heat or another, weaker photon, and causes biological harm as a radiation burn. The chain reaction caused by the initial dose of radiation can continue after exposure, much like a sunburn continues to damage skin even after one is out of direct sunlight.

For the range of energies commonly used in radiography, the interaction between gamma rays and electrons occurs in two ways. One effect takes place where all the gamma ray's energy is transmitted to an entire atom. The gamma ray no longer exists and an electron emerges from the atom with kinetic (motion in relation to force) energy almost equal to the gamma energy. This effect is predominant at low gamma energies and is known as the photoelectric effect. The other major effect occurs when a gamma ray interacts with an atomic electron, freeing it from the atom and imparting to it only a fraction of the gamma ray's kinetic energy. A secondary gamma ray with less energy (hence lower frequency) also emerges from the interaction. This effect predominates at higher gamma energies and is known as the Compton effect.

In both of these effects the emergent electrons lose their kinetic energy by ionizing surrounding atoms. The density of ions so generated is a measure of the energy delivered to the material by the gamma rays.

The most common means of measuring the variations in a beam of radiation is by observing its effect on a photographic film. This effect is the same as that of light, and the more intense the radiation is, the more it darkens, or exposes, the film. Other methods are in use, such as the ionizing effect measured electronically, its ability to discharge an electrostatically charged plate or to cause certain chemicals to fluoresce as in fluoroscopy.