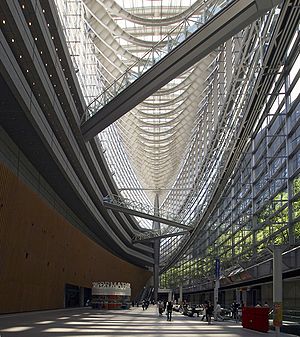 Rafael Viñoly Beceiro (born 1944) is an Uruguayan architect.[1] He is the principal of Rafael Viñoly Architects, which he founded in 1983 and has offices in New York, Palo Alto, London, Manchester, Abu Dhabi and Buenos Aires.[2]

Viñoly was born in Montevideo, Uruguay to Román Viñoly Barreto (a film and theater director) and Maria Beceiro (a mathematics teacher). He attended the University of Buenos Aires, receiving a Diploma in Architecture in 1968 and a Master of Architecture from the School of Architecture and Urbanism in 1969.

In 1964, he formed the "Estudio de Arquitectura Manteola-Petchersky-Sánchez Gómez-Santos-Solsona-Viñoly" architectural firm with six associates. This practice would eventually become one of the largest architectural practices in South America, completing many significant commissions in a very short time.

In 1978 Viñoly and his family relocated to the United States. For a brief period he served as a guest lecturer at the Harvard Graduate School of Design, settling permanently in New York City in 1979. He founded the firm Rafael Viñoly Architects PC in 1983. His first major project in New York was the John Jay College of Criminal Justice, which was completed in 1988. In 1989, he won an international competition to design the Tokyo International Forum. Completed in 1996, many people consider this building to be the most important cultural complex in Japan.[citation needed] His firm's design was one of the finalists in the World Trade Center design competition.[3]

During the course of his forty-plus year career, Viñoly has practiced in the United States, Latin America, Europe, Asia, Africa, and the Middle East. [4]

Major works by Viñoly include 432 Park Avenue, 20 Fenchurch Street and the Curve Theatre.

The building 20 Fenchurch Street in London won the 2015 Carbuncle Cup for its uglyness.[8] 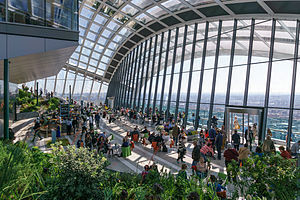 The Sky Garden, at 20 Fenchurch Street

Two of the skyscrapers designed by Viñoly, the Vdara in Las Vegas and 20 Fenchurch Street in London, have experienced unusual sun reflectivity problems due to their concave curved glass exteriors acting as respectively cylindrical and spherical reflectors for sunlight. In 2010, the Las Vegas Review Journal reported that sunlight reflected off the Vdara's south-facing tower could make swimmers in the hotel pool uncomfortably warm, as well as melting plastic cups and shopping bags; employees of the hotel referred to the phenomenon as the "Vdara death ray".[9] In London during the summer of 2013, sunlight reflecting off 20 Fenchurch Street melted parts on a parked automobile as well as scorching the carpet of a nearby barber shop.[10]