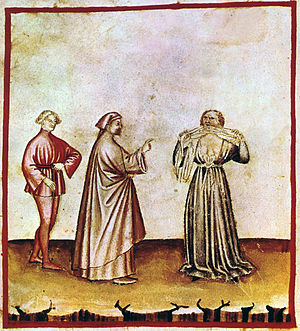 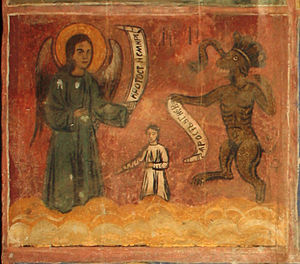 Angel with Temperance and Humility virtues versus Devil with Rage and Anger sins. A fresco from the 1717 Saint Nicolas church in Cukovets, Pernik Province, Bulgaria

Rage (often called fury or frenzy) is a feeling of intense, violent, or growing anger. It is sometimes associated with the fight-or-flight response, and is often activated in response to an external cue, such as an event that impacts negatively on the person. The phrase "thrown into a fit of rage" expresses the immediate nature of rage that occurs before deliberation. If left unchecked, rage may lead to violence. Depression and anxiety lead to an increased susceptibility to rage, and there are modern treatments for this emotional pattern.

Rage can sometimes lead to a state of mind where the individual experiencing it believes, and often is capable of doing things that may normally seem physically impossible. Those experiencing rage usually feel the effects of high adrenaline levels in the body. This increase in adrenal output raises the physical strength and endurance levels of the person and sharpens their senses, while dulling the sensation of pain. High levels of adrenaline actually impair memory, as brought to light in Gold's (2014) article. Temporal perspective is also affected: people in a rage have described experiencing events in slow-motion. High levels of adrenaline actually impair memory. Time dilation occurs due to the individual becoming hyper aware of the hind brain (the seat of fight or flight). Rational thought and reasoning would inhibit an individual from acting rapidly upon impulse. Human perception of time is a social construct that required rational thought and reasoning to become what it is today. The concept of minutes, hours, days (etc.) are socially constructed ideas that we use to encapsulate experience (Gold, 2014).

An older explanation of this "time dilation" effect is that instead of actually slowing our perception of time, high levels of adrenaline increase our ability to recall specific minutiae of an event after it occurs. Since humans gauge time based on the amount of things they can remember, high-adrenaline events such as those experienced during periods of rage seem to unfold more slowly.[2] It is safe to assume that there is truth in both theories.

A person in a state of rage may also lose much of their capacity for rational thought and reasoning, and may act, usually violently, on their impulses to the point that they may attack until they themselves have been incapacitated or the source of their rage has been destroyed.

A person in rage may also experience tunnel vision, muffled hearing, increased heart rate, and hyperventilation. Their vision may also become "rose-tinted" (hence "seeing red"). They often focus only on the source of their anger. The large amounts of adrenaline and oxygen in the bloodstream may cause a person's extremities to shake.

Psychiatrists consider rage to be at one end of the spectrum of anger, and annoyance to be at the other side.[3]

Rage occurs when oxytocin, vasopressin, and corticotropin-releasing hormone are rapidly released from the hypothalamus. This results in the pituitary gland producing and releasing large amounts of the adrenocorticotropic hormone, which causes the adrenal cortex to release corticosteroids. This chain reaction occurs when faced with a threatening situation.[4]

Some research suggests that an individual is more susceptible to having feelings of depression and anxiety if he or she experiences rage on a frequent basis. Health complications become much worse if an individual represses feelings of rage.[5] John E. Sarno believes that repressed rage in the subconscious leads to physical ailments. Cardiac stress and hypertension are other health complications that will occur when rage is experienced on a regular basis. Psycho-pathological conditions such as depression increase the chances of experiencing feelings of rage.[6]

According to psychologists, rage is a behavior that every person exhibits in some form. Rage is often used to denote hostile/affective/reactive aggression (as distinct from predatory/instrumental/proactive aggression, which by contrast is motivated by a desire to obtain some goal by use of aggression).[9] It denotes aggression where there is anger present, that is motivated by causing some harm to others, and that is characterized by impulsive thinking and a lack of planning.

Some psychologists, however, such as Bushman and Anderson, argue that the hostile/predatory dichotomy that is commonly employed in psychology fails to define rage fully, since it is possible for anger to motivate aggression, provoking vengeful behavior, without incorporating the impulsive thinking that is characteristic of rage. They point to individuals or groups such as Seung-Hui Cho in the Virginia Tech massacre or Eric Harris and Dylan Klebold of the Columbine High School massacre, all of whom clearly experienced intense anger and hate, but whose planning (sometimes over periods of years), forethought, and lack of impulsive behavior is readily observable.[10]

Rage stems from anger, in that, in certain cases where there is anger present, the ultimate push will create an outrageous occurrence. Many of the effects that stem from anger and how a person reaches the point of expressing rage is a fine line associated with these behavioral tendencies. Much of the behavior experienced from anger has been studied extensively, but most do not know what causes the next step, rage, or why some people go the extra emotional mile. Rage is considered to be an emergency reaction that humans are pre-wired to possess. Rage tends to be expressed when a person faces a threat to their pride, position, status, or dignity.[11]

Expression of rage can be very intense, often distinguished by distorted facial expressions and by threat (or execution) of physical attack. Rage is associated with individuals who experience psycho-pathological issues. This can lead to physical violence resulting in serious injury or death.[12]

Self-esteem is another factor of one feeling rage; evidence has shown that individuals that suffer from low self-esteem may compensate by inflicting physical harm onto others. Some psychologists have seen rage as being internally focused, constituting an attack on one’s self rather than on others. They believe this leads to rage being more intense, less focused, and longer-lasting. They also believe this 'self-inflicted' rage is a narcissistic response to one's past injuries. Rage, under this set of theories, is caused from built-up anger from past traumas.

Rage can also be released in the wake of a traumatic event. In people who witness the killing of a loved one, many will often enter or "go into a rage", attempting to kill the perpetrator. This can sometimes be the most violent and reluctant type of rage and will usually end only after the killer or they themselves have been killed.[citation needed]

Whether or not actions arise from the emotional state of rage is the subject of controversy in cognitive study. Cannon–Bard holds that a stimulus causes both the reaction and the emotion at once. Thus, a person would not first become enraged and then act, but do both simultaneously.