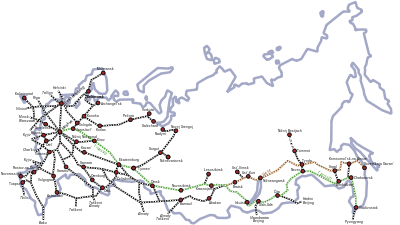 The most important railway lines of Russia

The Russian railways are ranked second longest globally, behind the railways of the United States. The volume of freight hauled is third behind the United States and China. In overall density of operations (freight ton-kilometers + passenger-kilometers)/length of track), Russia is second only to China. Rail transport in Russia has been described as one of the economic wonders of the 19th, 20th, and 21st century.[1]

Geographically, Russia is a much larger country than both the United States or China, therefore its rail density (rail tracking/country area) is lower than that of these of the two (much lower in the case of the United States). Since Russia's population density is also much lower than China and the U.S. (excluding Alaska), the Russian railways carry freight and passengers over very long distances, often through vast, nearly empty spaces. Their average length of haul is ranked second in the world, behind only the United States and tied with Canada. Coal and coke make up almost one-third of the freight traffic and have average hauls of around 1500 kilometers, while ferrous metals make up another 10 percent of freight traffic and travel an average of over 1900 kilometers. Many remote shippers and customers have access either to only very poor alternative shipping options by road or water, and to those alternative options for only part of the year.

Like most railways Rossiiskie Zheleznyie Dorogi carries both freight and passengers, it is one of the most freight-dominant railways in the world, behind only Canada, the United States, and Estonia in the ratio of freight ton-kilometers to passenger-kilometers. However per head of population intercity passenger travel is far greater than the United States (which has the lowest long distance passenger train usages in developed world). Measured by the share of freight carried, RZD is second to none among the world's largest railways in its importance to its country's economy.

Russia's railways are divided into seventeen regional railways, from the October Railway serving the St. Petersburg region to the Far Eastern Railway serving Vladivostok, with the free-standing Kaliningrad and Sakhalin Railways on either end. The regional railways were closely coordinated by the Ministry of the Means of Communication until 2003, and the Joint Stock Company Russian Railways, Rossiiskie Zheleznyie Dorogi or RZD, since then – including the pooling and redistribution of revenues. This has been crucial to two long-standing policies of cross-subsidization: to passenger operations from freight revenues, and to coal shipments from other freight. 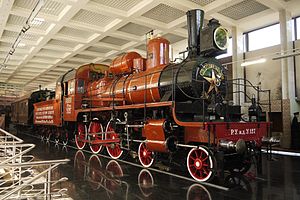 Russian locomotive class U - U-127 Lenin's 4-6-0 oil burning compound locomotive, currently preserved at the Museum of the Moscow Railway at Paveletsky Rail Terminal

The Russian railways were a collection of mostly privately owned and operated companies during most of the 19th century, though many had been constructed with heavy government involvement and financing. The tsarist government began mobilizing and nationalizing the rail system as World War I approached, and the new communist government finished the nationalization process. With the dissolution of the USSR in 1991, the Russian Federation was left with three-fifths of the railway track of the Union as well as nine-tenths of the highway mileage – though only two-fifths of the port capacity.

In 2009 Russia had 128,000 kilometers of common-carrier railway line, of which about half is electrified and carries most of the traffic, over 40% was double track or better.[7][8]

The SA3 coupler[15] (Soviet Automatic coupler, model 3) used in Russia is more advanced than the Janney coupler used in the United States. Advantages of the Russian SA3 include: 1. It is always ready to couple, unlike the Janney coupler which requires that at least one of the couplers has its knuckle open.[16] 2. It has greater gathering range.

While the Russians may have the best designed coupler in the world,[17] there were problems with it breaking due to making it with lower quality steel, low quality of maintenance/repairs/rebuilding, and coupling cars at speeds higher than allowed by the rules.[18] The quality of steel was improved but other problems remained.

Since 2010 the company had started an overhaul of its computer systems. The overhaul will centralize the management of data into new computing hubs, restructure the collection of information on the railway's field operations, and integrate new automation software to help the railway strategise how to deploy its assets. The geriatric machines that the new mainframes will replace include Soviet-built clones of IBM's Cold War–era computers, called ES EVM (the transliterated Russian acronym for "unified system of electronic computing machines").[19]

The RZD operates the Armenian Railway until 2038. During this period, at least 570 million euro will be invested, 90% going into infrastructure.[20]

Joint ventures have been formed to build and operate a port in Rasŏn in North Korea, and rail links connecting that port to the Russian rail network at the North Korean-Russian border Khasan-Tumangang.[21]