Ralph Spenser Hooper OBE FREng FRAeS (born 30 January 1926) is an English aeronautical engineer, recognised mostly for his work on the Harrier, specifically in relation to the marriage between the Pegasus engine and the layout of the aircraft, allowing it to safely hover with margins of stability.

He was born in Hornchurch, then in Essex, now in the London Borough of Havering. He was the son of Marjorie Spenser and Herbert Hooper. He is a distant relative of the poet Edmund Spenser. He went to Hymers College in Hull. Due to the Hull Blitz he was evacuated to Pocklington Grammar School for one and a half terms. His sister Sheila went to Newland High School, a girls' grammar school in the north of Hull. He was an apprentice at Blackburn Aircraft Company when aged 15 in January 1942, then went to University College Hull (became the University of Hull in 1954), gaining a Diploma in Aeronautics. He moved to Hawker in 1946.

He is sometimes referred to, with Sir Stanley Hooker and Sir Sydney Camm, as being one of the three people who created the Harrier aircraft. Unlike them, he was not knighted. He was awarded the Royal Aeronautical Society's Gold Medal in 1986 for his work on the Harrier and Hawk.[1] He received the OBE in June 1978.[2]

He later became Deputy Technical Director of British Aerospace at Kingston upon Thames (the base of Hawker) in Surrey.

Working from 1957 with the designer of the Bristol Siddeley Pegasus engine, Gordon Lewis, they came to an arrangement of engine and aircraft design, resulting in the initial designs of the Hawker Siddeley P.1127. The Pegasus design was initially designated as the BE.53, when the final four-nozzle layout was not arrived at. The Bristol Siddeley Orpheus had been the starting point for the engine, with the Orpheus 3 first used, then an Orpheus 6. The Harrier project, unlike most modern British military aircraft, had not been developed in response to a Government requirement but was Hawker's own unsupported project, and from 1959 was the only aircraft that Hawker was working on. It was also produced at a time when many concurrent aircraft projects, from Government requirements, would be drastically cancelled. The Pegasus engine development was financially supported by a department of NATO.

The first design had an engine that only vectored the thrust from the engine's fan (cool air) - this was only 50% of the engine's total thrust. Vectoring from the high-temperature engine exhaust was not originally contemplated, or thought possible. However he realised that the hot exhaust gases could be bifurcated, as demonstrated on the earlier Hawker Sea Hawk, to provide enough thrust for vertical take off, the fundamental layout of the Harrier.

By March 1958 he had finally arrived at (what would become) the design of the Harrier, with its distinctive anhedral wing design and undercarriage with wing-tip outriggers. The undercarriage design was much disliked by Sir Sydney Camm. Detailed design of the wing began in August 1958. In March 1959, the Government issued the General Operational Requirement (GOR) 345 for a vertical take off aircraft, in response its knowledge of the design work of the P.1127. This was followed in May 1959 by the Government specification ER 204D.

In early 1960, work at NASA's Ames Research Center had demonstrated that transition from vertical to conventional flight would be possible. On 22 June 1960, the project finally received a contract and finance from the Ministry of Aviation. XP831 first flew (tethered) on 21 October 1960 (now at the Royal Air Force Museum London) with a Pegasus 2 engine at Hawker's Dunsfold Aerodrome flown by Bill Bedford. Untethered flight first took place on 19 November 1960. The first conventional flight took place on 13 March 1961 from RAE Bedford, and it was there on 12 September 1961 that the first full transition from vertical to conventional flight took place, surprisingly with little incident. The first crash took place (XP636) on 14 December 1961 with the pilot successfully ejecting. Anhedral tailplanes were introduced in 1962. 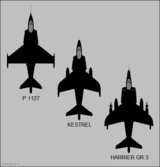 Evolution of the Harrier's wing

In 1964, the prototypes were improved with a more swept wing and a more powerful Pegasus 5 engine, and in November 1964 it was designated as the Hawker Siddeley Kestrel, and was trialled by pilots from the RAF, the German Luftwaffe and the US Air Force at RAF West Raynham until November 1965. It was funded by these other two air forces as well. Hawker had become Hawker Siddeley in 1963.[3]

The Kestrel was only meant to be a development aircraft for the later P.1154, but was what became the Harrier. The RAF was not pleased about this change of events. The Kestrel was developed under Air Staff Requirement 384. The resulting aircraft had a Pegasus 6 engine, with a new design of air intakes, and redesigned wings to improve longitudinal stability. In December 1966, 60 aircraft were ordered by the Government, and by 1967 had been christened as the Harrier.

In 1962 he won the NATO NBMR-3 (NATO Basic Military Requirement) International Design Competition for his work on the proposed supersonic version of the Harrier, the Hawker Siddeley P.1154. This was cancelled by the new Labour government in February 1965, when the aircraft was in the process of advanced assembly. It was originally to be called the Harrier, and would have had Plenum Chamber Burning in the front nozzle to improve thrust in the BS.100 engine. Although originally for use by Royal Navy and RAF squadrons, in 1963 it was decided the Royal Navy would use the McDonnell Aircraft Phantom.

He became a Fellow of the Royal Academy of Engineering in 1999. He now lives in Ham, London.

Anhedral wing and undercarriage of the Harrier