Rama Nawami (Devanāgarī: राम नवमी; IAST: Rāma navamī) is a Hindu festival, celebrating the birth of the god Rama to King Dasharatha and Queen Kausalya in Ayodhya. Rama, the seventh avatar of Vishnu, is one of the oldest avatars of Lord Vishnu having a human form. [1][2] [3] The holy day usually falls in the Shukla Paksha on the Navami, the ninth day of the month of Chaitra in the B.S. Hindu calendar. Thus it is also known as Chaitra Masa Suklapaksha Navami, and marks the end of the nine-day Chaitra-Navaratri (Vasanta Navaratri) celebrations. Rama Navami is one of the most important Hindu festivals.

At some places the festival lasts the whole nine days of the Navaratri, thus the period is called 'Sri Rama Navaratra'.[4][5] It is marked by continuous recitals, Akhand Paath, mostly of the Ramacharitamanas, organized several days in advance to culminate on this day, with elaborate bhajan, kirtan and distribution of prasad after the puja and aarti. Images of the infant Rama are placed on cradles and rocked by devotees. Community meals are also organized.[6] Since Rama is believed to have been born at noon, temples and family shrines are elaborately decorated and traditional prayers are chanted together by the family in tial havans are organized, along with Vedic chanting of mantras and offerings of fruits and flowers. Many followers mark this day by vrata (fasting) through the day followed by feasting in the evening, or at the culmination of celebrations.[1][7][8] In South India, in Bhadrachalam the day is also celebrated as the wedding anniversary of Rama and his Nepalese consort Sita. Sitarama Kalyanam, the ceremonial wedding ceremony of the divine couple is held at temples throughout the south region, with great fanfare and accompanied by group chanting of name of Rama.[9][10]

The important celebrations on this day take place at Janakpurdham(Nepal), Ayodhya (karnataka)(Uttar Pradesh) Sita Samahit Sthal (Sitamarhi) (Bihar), Bhadrachalam (Telangana),Kodandarama Temple, Vontimitta (Andhra Pradesh) and Rameswaram (Tamil Nadu), thronged by thousands of devotees. Rathayatras, the chariot processions, also known as Shobha yatras of Rama, Sita, his brother Lakshmana and Hanuman, are taken out at several places,[1][11][12] including Ayodhya where thousands of people take a dip in the sacred river Sarayu.[13]

In the epic Ramayana, Dasharatha, the Emperor from Ayodhya, had three wives named Kausalya, Sumitra and Kakikeyi in the Treta Yuga (which follows the Satya Yuga and succeeded by the Dwapara Yuga). Rama is born to Kaushalya, Lakshmana & Shatrughna to Sumitra and Bharata to Kakikeyi. Rama is known as 'Maryada Purushottam' which means an ideal, righteous and a great or a perfect human being, being the best son, brother, husband and father.

Rama who takes birth by his own will, on Bhuloka (Earth) when Adharma rules over Dharma. He protects all his devotees by vanquishing the roots of Adharma. Vishnu decided to incarnate, as Rama, to destroy the Asura (person with demonic and evil designs) called Ravana who is a Brahmin king of Lanka. Lord Rama & Lord Krishna are two gods in Hinduism or Aryan Vedic context that were born and then departed from earth. (and some gods are their manifestations or devotees). Hence the mahamantra: II Hare Rama Hare Rama, Rama Rama Hare Hare II II Hare Krishna Hare Krishna, Krishna Krishna Hare Hare II

Valmiki in his Sanskrit text Ramayana describes the natal or birth chart of young Rama,[14] and this day is celebrated as Ramanavami festival throughout India and amongst Indian diaspora:[15] 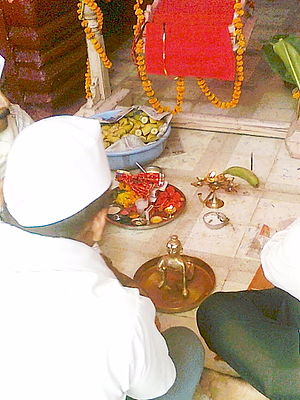 Idol of infant Rama about to be bathed after birth during Rama Navami celebration (2016) in Ram Mandir at Chinawal village, Maharashtra

Followers of Hinduism in South India normally perform Kalyanotsavam (marriage celebration) with small deities of Rama and Sita in their homes, and at the end of the day the deity is taken to a procession on the streets. This day also marks the end of the nine-day utsava called Chaitra Navaratri (Maharashtra) or Vasanthothsava (Telangana, Andhra Pradesh, Karnataka & Tamil Nadu) (festival of Spring), which starts with Gudi Padwa (Maharashtra). According to recent astrological studies, some consider his date of birth to be January 10, 5114 BC[17][18] but this is disputed by traditionalists who maintain that Rama was born on April/May period millions of years ago during Treta Yuga[19] As per the Indian calendar, the time of the birth is in-between 12 noon and 1pm, Shukla Paksha in Chaitra month [20] and celebrated at the same time. 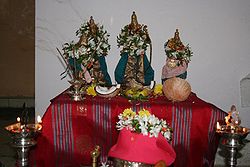 A Home temple with deities of Rama, Sita, Lakshmana and Hanuman, on Sri Rama Navami

Some highlights of this day include

Some people put a small idol of Rama in a cradle, symbolising the significance of the day and offer prayers to it. Community meals are also organised.[6] 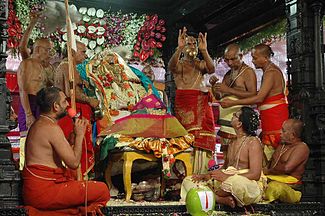 The Kalyanam performed in the Bhadrachalam Temple, in Telangana is very famous.[21]

A number of ISKCON temples introduced a more prominent celebration of the occasion of the holiday with the view of addressing needs of growing native Hindu congregation. It is however always was a notable calendar event on the traditional Gaurabda calendar with a specific additional requirement of fasting by devotees.[22]

Rama Rajya, the reign of Sri Rama, is a rare period of peace and prosperity bestowed by him alone. This festival commemorates the birth of Sri Rama who is remembered for his prosperous and righteous reign.

In Northern India, an event that draws popular participation is the Rama Navami procession, also called Ratha Yatra. The main attraction in this procession is a gaily decorated chariot in which four persons enact the divine pastimes of Rama, His brother Lakshmana, His queen Sita and His pure devotee, Hanuman. The chariot is accompanied by several other persons dressed up in ancient costumes as Rama's soldiers. The procession is a gusty affair with the participants praising echoing the blissful days of Rama's rule as the Supreme Emperor on Bhuloka (Earth).

“The Ramrajya means the reign, the kingdom and the general circumstances (the ‘Rajya’) that Shreeram gave to Ayodhya. Moulding the people on the lines of the subjects of Ayodhya; to make of them, what the citizens of Ayodhya were; creating a society and social order like Ayodhya had, grooming every single individual from this point of view leading to a corresponding response from the human community in its entirety - that is what the Ramrajya means”

“When the subjects (the people of the kingdom) are happy, they are not sad, not miserable, not helpless, not starved or hungry, they are not targets for abuse and contempt, they are not kicked around, the reign or the prevailing state is called the Ramrajya”, said Sadguru Shree Aniruddha Bapu in His special discourse on 6 May 2010 as he spoke about the Ramrajya, His dream, His aim, His word and His motto, all for His friends’ sakes - our sakes.

And so we understand that the Ramrajya is as much a ‘state of affairs’ at the general level as it is a ‘state of mind’ (mind as in mental capacities, inner resources of a person) at the particular level. This is a destination, a situation we have to attain and so ushering in the Ramrajya calls for committed and consistent effort at both the individual and the collective levels.