Ramanuja (traditionally, 1017–1137 CE) was a Hindu theologian, philosopher, and scriptural exegete, born in a Tamil family in the village of Sriperumbudur, Tamil Nadu. He is also known as Sri Ramanujacharya, Udayavar, Ethirajar (Yatiraja), Emberumannar and Lakshmana Muni-Kunju.[1] His descendants are known as "swayamacharya" (which is also a division in Iyengar community). He is seen by Sri Vaishnavism as the most important acharya (teacher) of their tradition who followed Nathamuni and Yamunacharya, and by Hindus in general as the leading expounder of Vishishtadvaita, one of the classical interpretations of the dominant Vedanta school of Vedic philosophy.[2][3]

The traditional biographies of Ramanuja place his life in the period of 1017–1137 CE,[4] yielding a lifespan of 120 years.

In 1917, T. A. Gopinatha Rao proposed a chronology based on the traditional lifetime of 1017–1137. He identified the Chola king with Kulothunga Chola I (reigned 1070–1120), and dated the exile to Melkote from 1079 to 1126 CE.[5] However, this would extend the period of exile to 47 years, and in any case, Kulothunga I was not known for being intolerant.[citation needed]

A different chronology was proposed by T. N. Subramanian, an official in the Madras government. This chronology identifies the Chola King with Kulothunga Chola II, who reigned from 1133–50 and was – also arguably – known for his persecution of Vaisnavites. It puts Ramanuja's exile from c. 1137 to 1148. Subramanian's hypothesis is aided by a fragment from the late Tamil biography "The Divine History of Ramanuja" ("இராமாஙுஜரிய திவ்ய சரிதை" / Rāmānujārya Divya Caritai"), which states that Ramanuja completed his most important work, the Śrībhāṣya, in 1155–56. Nevertheless, temple inscriptions in Karnataka indicate the presence of Ramanuja and his disciples before 1137. John Carman hypothesises that the traditional biographers conflated two different visits to Mysore into one. This later chronology has been accepted by several scholars, yielding a tentative lifetime of 1077–1157.[5]

Whatever the precise dates of Ramanuja's lifetime, it seems clear that all three of the great Srivaiṣṇava acharyas lived under the relatively stable and non-sectarian climate of the Chola empire, before its decline in the late 12th and 13th centuries.[6]

By the 5th century, the South Indian religious scene was diverse, with popular religion existing alongside Vedic sacrifice and non-Vedic traditions like Buddhism and Jainism. Indeed, the title character of the sixth century Tamil Buddhist epic Manimekalai is advised at one point to study the various Hindu schools of philosophy, such as Sankhya and Vaisheshika as well as Buddhism, Ajivika, Cārvāka, and Jainism. It was in this context that fears of a Buddhist or Jain takeover spurred a large Hindu revival that reached its peak in the 7th century and continued nearly into the 2nd millennium.

The popular aspects of this revival took the shape of several mystical and passionate bhakti movements, represented on the Sri Sampradaya side by the twelve alvars. The alvars came from a variety of social strata; their ranks include shudras (persons from one of the castes) and one woman. The intense devotionalism of their poetry and insistence that caste and gender are no barrier to a relationship with the Divine is uncharacteristic of classical Vedic thought, which laid a strong emphasis on the performance of the social and religious duties proper to one's place in the social structure. Some of these were collected into a definitive canon known as the Nālāyira Divya Prabandha ("divine composition of 4000 verses"), by Nathamuni in the 10th century, and came to be seen as a source of revelation equal in authority to the Vedas in the Śrīvaiṣṇava community.

On the philosophical side, this period saw the rise of the Vedanta school of philosophy, which focused on the elucidation and exegesis of the speculative and philosophical Vedic commentaries known as the Upanishads. The Advaita, or non-dualist interpretation of Vedanta was developed in this time by Adi Shankara and later by Maṇḍana Miśra. It argued that the Brahman presented in the Upanishads is the static and undifferentiated absolute reality, and that the ultimately false perception of difference is due to avidyā, or ignorance.

The goal of proving the Vedantic legitimacy of the popular conception of a personal deity and a genuine personal identity essentially characterises Ramanuja's project, and the Advaitin school presents a natural object for his polemics. It is this synthesis between the classical Sanskrit writings and the popular Tamil poetry that is the source of one of the names of Ramanuja's system: Ubhaya Vedānta, or "Vedanta of both kinds."

In dealing with the lives of the Vedantic teachers, there is little in the way of actual history, and it is thus necessary to make reference to the many hagiographical works—both in verse and prose—that form a major genre in both Sanskrit and South Indian vernaculars.[lower-alpha 1]

The earliest such hagiographies in prose is the Ārāyirappaṭi Guruparamparāprabhāva (the "six thousand" splendour of the succession of teachers) (not to be confused with the well-known commentary on the Divya Prabandha of the same length, also commonly referred to as the "Six Thousand").[lower-alpha 2] This was written by Piṉpaḻakiya Perumāḷ Jīyar in the 13th century in a highly Sanskritised dialect of Tamil known as Maṇipravāla. Perhaps earlier was a Sanskrit work of poetry, the Divya Sūri Carita or Acts of the Divine Sages, probably written in the 12th century by Garuḍavāhaṇa Paṇḍita, a contemporary disciple of Ramanuja's.[lower-alpha 3]

In later times, a number of traditional biographies proliferated, such as the 16th or 17th century Sanskrit work Prapannāmṛta and, following the split of the Śrīvaiṣṇava community into the Vadakalais and Teṉkalais. The Muvāyirappaṭi Guruparamparāprabhāva or the "Three Thousand" Splendor of the Succession of Teachers by Brahmatantra Svatantra Jīyar represents the earliest Vadakalai biography, and reflects the Vadakalai view of the succession following Ramanuja. Ārāyirappaṭi Guruparamparāprabhāva, or "Six Thousand" Splendor of the Succession of Teachers referred in the previous paragraph represents the Tenkalai biography. 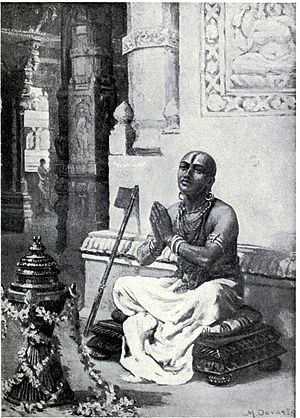 Ramanuja contemplating his philosophy of the one personal god, A.D. 1100

According to historian Alkandavilli Govindāchārya, Bitti Deva and his chief queen Shantala Devi had a sick daughter. She was possessed by an evil spirit and the Vaishnavite saint Ramanuja is said to have cured her. After this episode it is said that Bitti Deva embraced Vaishnavism.[7][full citation needed] 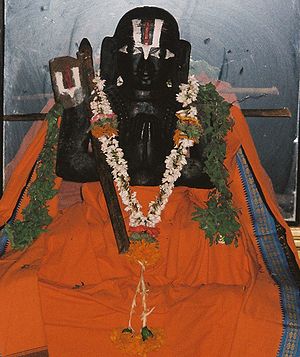 Ramanuja has many names, which were given at different points of time :

Ramanuja wrote nine books. They are also referred to as the nine precious gems, the Navaratnas.

Reverence as an Acharya

Harold Coward describes Ramanuja as "the founding interpreter of [Sri Vaisnavite] scripture."[9] Although a collator and interpreter rather than an original thinker, there was originality in his method of synthesising the Tamil and Sanskrit texts.[10]

Ramanuja's thiruvarasu (sacred burial shrine) is the Ramanuja shrine (sannidi) located inside the Sri Ranganathaswamy temple (periyakoyil or simply koyil) Srirangam, Tamil Nadu within the temple complex, where he attained his Acharyan Thiruvadi (the lotus foot of his Acharya). The Body of the saint (thirumeni) is placed inside the Sri Ramanuja shrine in "Padmasanam" (folded leg posture). It is anointed with chandan (sandalwood paste) and saffron (kungumappoo) twice a year. His shrine is open to the general public for darshan. Acharya Sri Ramanuja is believed to be the titular administrator the Srirangam temple.

In all Sri Vaishnava temples, Acharya Ramanuja is given the foremost prominence. His blessings are invoked at the beginning of devotional services. Several temples like Sri Venkateswara Temple at Tirumala, Sri Parthasarathy Temple at Chennai, Sri Thirunarayana Swami Temple at Melukote have exclusive shrines dedicated to him. The Sattrumurai, or Appellations made to the Lord, at the end of daily services in a Sri Vaishnava temple always conclude with the words:

Meaning: Let the most Magnificent instruction of Sri Ramanuja increase and pervade through all countries at all times, without any hindrance.

Iyengar Brahmins in Tamil Nadu, Karnataka and Andhra Pradesh follow his philosophical tradition. The Tamil prabandhas are chanted at Vishnu temples on par with the Vedas. Persons of all communities, and not just Brahmins, are given roles in rituals at Srirangam and other leading temples. The philosophic discourses have been passed on to subsequent generations by successors like Pillai Lokacharya, Vedanta Desika and Manavala Mamuni who lived in the 13th and 14th centuries.

Several hagiographic accounts suggest that Ramanuja was an incarnation of Sri Adishesha. The Swaminarayan tradition of Gujarat also traces its acharya-parampara to Ramanuja through Ramananda (who according to legend was administered pancha-samskaras by Ramanuja).

Visishtadvaita philosophy is widely followed in Andhra Pradesh, Tamil Nadu, South Karnataka, Gujarat and some parts of Maharashtra. There are separate shrines for the saint in Adikesava Perumal temple, Sriperumpudur, Srirangam Ranganathaswamy temple and most Vaishnavite shrines in South India including Dharapuram, Tirupur District, Cholakadai Street Ramanujar Temple. It is believed that Ramanujar stayed here on two occasions and the shrine in a sitting posture revealed. Original granite temple is underneath and the recent Maha Kumbakishgam (18th November 2015) revealed as "Thaan Amartha Tirumeni" as the first temple of Sri Ramanujar among three others.