A random variable's possible values might represent the possible outcomes of a yet-to-be-performed experiment, or the possible outcomes of a past experiment whose already-existing value is uncertain (for example, due to imprecise measurements or quantum uncertainty). They may also conceptually represent either the results of an "objectively" random process (such as rolling a die) or the "subjective" randomness that results from incomplete knowledge of a quantity. The meaning of the probabilities assigned to the potential values of a random variable is not part of probability theory itself but is instead related to philosophical arguments over the interpretation of probability. The mathematics works the same regardless of the particular interpretation in use.

The formal mathematical treatment of random variables is a topic in probability theory. In that context, a random variable is understood as a function defined on a sample space whose outputs are numerical values.[2]

is a measurable function from the set of possible outcomes

to be a probability space and

to be a measurable space (see Measure-theoretic definition).

is usually a real-valued function (

), it does not return a probability. The probabilities of different outcomes or sets of outcomes (events) are already given by the probability measure

describes some numerical property that outcomes in

may have. E.g. the number of heads in a random collection of coin flips; the height of a random person. The probability that

is the measure of the set of outcomes

When the image (or range) of

. If the image is uncountably infinite then

Any random variable can be described by its cumulative distribution function, which describes the probability that the random variable will be less than or equal to a certain value.

). This ensures that it is possible to define quantities such as the expected value and variance of a random variable, its cumulative distribution function, and the moments of its distribution.

However, the definition above is valid for any measurable space

of values. Thus one can consider random elements of other sets

, such as random boolean values, categorical values, complex numbers, vectors, matrices, sequences, trees, sets, shapes, manifolds, and functions. One may then specifically refer to a random variable of type

This more general concept of a random element is particularly useful in disciplines such as graph theory, machine learning, natural language processing, and other fields in discrete mathematics and computer science, where one is often interested in modeling the random variation of non-numerical data structures. In some cases, it is nonetheless convenient to represent each element of

using one or more real numbers. In this case, a random element may optionally be represented as a vector of real-valued random variables (all defined on the same underlying probability space

, which allows the different random variables to covary). For example:

. We can introduce a real-valued random variable

that models a $1 payoff for a successful bet on heads as follows:

If the coin is a fair coin, Y has a probability mass function 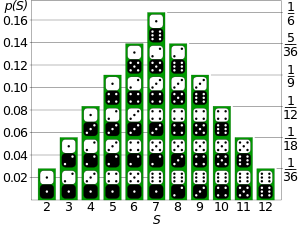 If the sample space is the set of possible numbers rolled on two dice, and the random variable of interest is the sum S of the numbers on the two dice, then S is a discrete random variable whose distribution is described by the probability mass function plotted as the height of picture columns here.

A random variable can also be used to describe the process of rolling dice and the possible outcomes. The most obvious representation for the two-dice case is to take the set of pairs of numbers n1 and n2 from {1, 2, 3, 4, 5, 6} (representing the numbers on the two dice) as the sample space. The total number rolled (the sum of the numbers in each pair) is then a random variable X given by the function that maps the pair to the sum:

and (if the dice are fair) has a probability mass function ƒX given by:

An example of a random variable of mixed type would be based on an experiment where a coin is flipped and the spinner is spun only if the result of the coin toss is heads. If the result is tails, X = −1; otherwise X = the value of the spinner as in the preceding example. There is a probability of ​1⁄2 that this random variable will have the value −1. Other ranges of values would have half the probability of the last example.

The most formal, axiomatic definition of a random variable involves measure theory. Continuous random variables are defined in terms of sets of numbers, along with functions that map such sets to probabilities. Because of various difficulties (e.g. the Banach–Tarski paradox) that arise if such sets are insufficiently constrained, it is necessary to introduce what is termed a sigma-algebra to constrain the possible sets over which probabilities can be defined. Normally, a particular such sigma-algebra is used, the Borel σ-algebra, which allows for probabilities to be defined over any sets that can be derived either directly from continuous intervals of numbers or by a finite or countably infinite number of unions and/or intersections of such intervals.[2]

The measure-theoretic definition is as follows.

be a probability space and

a measurable space. Then an

-valued random variable is a function

-measurable. The latter means that, for every subset

.[4] This definition enables us to measure any subset

in the target space by looking at its preimage, which by assumption is measurable.

is a topological space, then the most common choice for the σ-algebra

, which is the σ-algebra generated by the collection of all open sets in

. In such case the

-valued random variable is called the

is the real line

In this case the observation space is the set of real numbers. Recall,

is the probability space. For real observation space, the function

is a real-valued random variable if

If a random variable

defined on the probability space

is given, we can ask questions like "How likely is it that the value of

is equal to 2?". This is the same as the probability of the event

which is often written as

yields the probability distribution of

. The probability distribution "forgets" about the particular probability space used to define

and only records the probabilities of various values of

to "push-forward" the measure

is a technical device used to guarantee the existence of random variables, sometimes to construct them, and to define notions such as correlation and dependence or independence based on a joint distribution of two or more random variables on the same probability space. In practice, one often disposes of the space

altogether and just puts a measure on

that assigns measure 1 to the whole real line, i.e., one works with probability distributions instead of random variables.

The probability distribution of a random variable is often characterised by a small number of parameters, which also have a practical interpretation. For example, it is often enough to know what its "average value" is. This is captured by the mathematical concept of expected value of a random variable, denoted E[X], and also called the first moment. In general, E[f(X)] is not equal to f(E[X]). Once the "average value" is known, one could then ask how far from this average value the values of X typically are, a question that is answered by the variance and standard deviation of a random variable. E[X] can be viewed intuitively as an average obtained from an infinite population, the members of which are particular evaluations of X.

Mathematically, this is known as the (generalised) problem of moments: for a given class of random variables X, find a collection {fi} of functions such that the expectation values E[fi(X)] fully characterise the distribution of the random variable X.

can be constructed; this uses the Iverson bracket, and has the value 1 if X has the value "green", 0 otherwise. Then, the expected value and other moments of this function can be determined.

to the outcomes of a real-valued random variable X. The cumulative distribution function of

If function g is invertible, i.e. g−1 exists, and is either increasing or decreasing, then the previous relation can be extended to obtain

and, again with the same hypotheses of invertibility of g, assuming also differentiability, we can find the relation between the probability density functions by differentiating both sides with respect to y, in order to obtain

If there is no invertibility of g but each y admits at most a countable number of roots (i.e. a finite, or countably infinite, number of xi such that y = g(xi)) then the previous relation between the probability density functions can be generalized with

where xi = gi−1(y). The formulas for densities do not demand g to be increasing.

In the measure-theoretic, axiomatic approach to probability, if we have a random variable

and a Borel measurable function

will also be a random variable on

, since the composition of measurable functions is also measurable. (However, this is not true if

is Lebesgue measurable.) The same procedure that allowed one to go from a probability space

can be used to obtain the distribution of

is a random variable with a cumulative distribution

is a fixed parameter. Consider the random variable

Which is the cdf of an exponential distribution.

is a random variable with a standard normal distribution, whose density is

We can find the density using the above formula for a change of variables:

In this case the change is not monotonic, because every value of

has two corresponding values of

(one positive and negative). However, because of symmetry, both halves will transform identically, i.e.

The inverse transformation is

and its derivative is

This is a chi-squared distribution with one degree of freedom.

In increasing order of strength, the precise definition of these notions of equivalence is given below.

If the sample space is a subset of the real line, random variables X and Y are equal in distribution (denoted

) if they have the same distribution functions:

Two random variables X and Y are equal almost surely if, and only if, the probability that they are different is zero:

For all practical purposes in probability theory, this notion of equivalence is as strong as actual equality. It is associated to the following distance:

where "ess sup" represents the essential supremum in the sense of measure theory.

Finally, the two random variables X and Y are equal if they are equal as functions on their measurable space:

A significant theme in mathematical statistics consists of obtaining convergence results for certain sequences of random variables; for instance the law of large numbers and the central limit theorem.