From Infogalactic: the planetary knowledge core
Jump to: navigation, search
For the photographic camera type, see Rangefinder camera.
"Range scanner" redirects here. It is not to be confused with 3D scanner.
For a more comprehensive list, see Length, distance, or range meter. 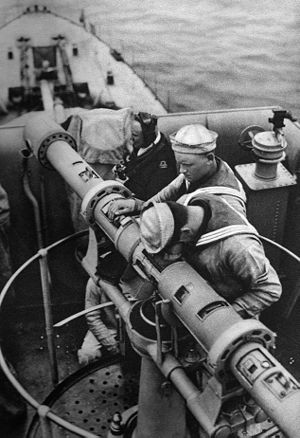 The coincidence rangefinder of ORP Wicher 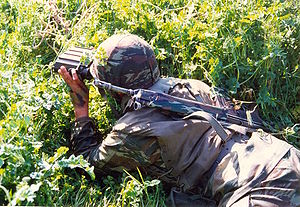 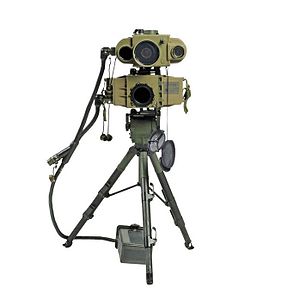 A rangefinder is a device that measures distance from the observer to a target.

Some devices use active methods to measure (such as ultrasonic ranging module, laser rangefinder, radar distance measurement); others measure distance using trigonometry (stadiametric rangefinders and parallax, or coincidence, rangefinders). Older methodologies that use a set of known information, usually distances or target sizes, to make the measurement, have been in regular use since the 18th century.

Applications include surveying, navigation, to permit focus in photography, choosing a golf club according to distance, and correcting aim of a projectile weapon for distance.

Laser rangefinders are used for many things today, including golf. People can use this technology not only to measure the yardage of a particular shot, but to gauge slope and wind as well. The technology makes it very simple to obtain a yardage. In a typical rangefinder, one will aim the reticle at the flagstick and press a button to get the yardage. Of course, this technology quickly made its way up to the professional level, and there was an outburst of confusion. There was intense debate over whether they should be allowed in tournaments, professionally or on an amateur level. Nothing much has been concluded on the issue, other than it is still a work in progress. Today, laser rangefinders are not permitted in tournament level on the PGA under any circumstances. Although the use is banned on the professional level, they are becoming very widely used on the amateur level. The growing popularity of this technology among amateurs is becoming visibly apparent, and it can be seen throughout the country. With the rise in use, the prices over the years have also been on the incline. In 2010, rangefinders were generally in the $100–$200 price range, whereas today they are anywhere from $300 and above(Golfsmith.com). According to the media surrounding golf, one of the biggest issues in golf today is the pace of play. Statistics show that it is getting slower and slower by the year, and one of the biggest benefits of permitting rangefinders is that it greatly increases pace of play. This is a major driving force behind the growing popularity in admittance in laser rangefinders, and a profound argument against the ban at the professional level. However, ‘traditionalists’ of golf say they want to preserve the integrity and history of the game, and by doing so, not allow the use of laser rangefinders. Both sides have their arguments, and it has resulted in a stand-still for several years.

Rangefinders may be used by users of firearms over long distances, to measure the distance to a target in order to allow for projectile drop.[1] The laser rangefinder displays a luminous dot that may alert a target. Until the development of electronic means of measuring range after the Second World War, warships used very large optical rangefinders—with a baseline of many meters—to measure range for naval gunnery.

Rangefinders are also used for surveying in forestry. Special devices with anti-leaf filters are used.

Since the 1990s, rangefinders have been used in virtual reality systems to detect operator movements and locate objects.[2]