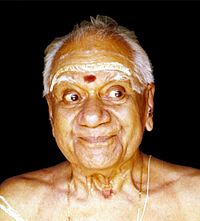 A rasa (Sanskrit: रस lit. 'juice' or 'essence') denotes an essential mental state and is the dominant emotional theme of a work of art or the primary feeling that is evoked in the person that views, reads or hears such a work.

Although the concept of rasa is fundamental to many forms of Indian art including dance, music, musical theatre, cinema and literature, the treatment, interpretation, usage and actual performance of a particular rasa differs greatly between different styles and schools of abhinaya, and the huge regional differences even within one style.

Bharata Muni enunciated the eight Rasas in the Nātyasāstra, an ancient work of dramatic theory, written during the period between 200 BC and 200 AD. Each rasa, according to Nātyasāstra, has a presiding deity and a specific colour. There are 4 pairs of rasas. For instance, Hāsya arises out of Sringara. The Aura of a frightened person is black, and the aura of an angry person is red. Bharata Muni established the following.[1]

As the tradition of alankara-shastra developed from the sixth through tenth centuries CE, a ninth rasa was contentiously endorsed by certain scholars; this rasa was only widely accepted after an extended philosophical and aesthetic theorization by Abhinavagupta. Subsequently, the nine rasas were accepted by the majority of the Alankarikas, and the expression Navarasa (the nine rasas), could come into vogue.

However, the presiding deities, the colours and the relationship between these additional rasas have not been specified. 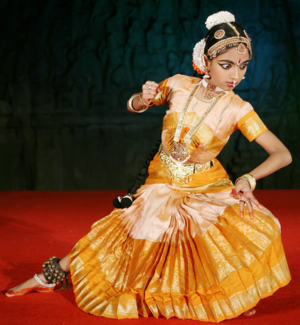 Raudram rasa of the destructive fury of goddess Durga in Bharatanatyam

In the literary compositions, the emotion of Bhakti as a feeling of adoration towards God was long considered only a minor feeling fit only for Stothras, but not capable of being developed into a separate rasa as the sole theme of a whole poem or drama. In the tenth century, it was still struggling, and Aacharya Abhinavagupta mentions Bhakti in his commentary on the Natya Shastra, as an important accessory sentiment of the Shanta Rasa, which he strove with great effort to establish. However, just as Shantha slowly attained a state of primacy that it was considered the Rasa of Rasas, Bhakti also soon began to loom large and despite the lukewarmness of the great run of Alankarikas, had the service of some distinguished advocates, including Tyagaraja. It is the Bhagavata that gave the great impetus to the study of Bhakti from an increasingly aesthetic point of view.

A Rasa is the developed relishable state of a permanent mood, which is called Sthayi Bhava. This development towards a relishable state results by the interplay on it of attendant emotional conditions which are called Vibhavas, Anubhavas and Sanchari Bhavas. Vibhavas means Karana or cause: it is of two kinds - Alambana, the personal or human object and substratum, and Uddipana, the excitants. Anubhava, as the name signifies, means the ensuants or effects following the rise of the emotion. Sanchari Bhavas are those crossing feelings which are ancillary to a permanent mood. Eight more emotional features are to be added, namely, the Saatvika Bhavas.[2]

In the Indian performing arts, a rasa is an emotion inspired in an audience by a performer. They are described by Bharata Muni in the Nātyasāstra, an ancient work of dramatic theory. Rasas are created by bhavas: the gestures and facial expressions of the actors.[3] Expressing Rasa in classical Indian dance form is referred to as Rasa-abhinaya. The Nātyasāstra carefully delineates the bhavas used to create each rasa.

The theory of rasas still forms the aesthetic underpinning of all Indian classical dance and theatre, such as Bharatanatyam, kathak, Kuchipudi, Odissi, Manipuri, Kudiyattam, Kathakali and others.

The expressions used in Kudiyattam or Kathakali are extremely exaggerated theatrical expressions. The opposite of this interpretation is Balasaraswathi's school of subtle and understated abhinaya of the devadasis. There were serious public debates when Balasaraswathi condemned Rukmini Devi's puritanistic interpretations and applications of Sringara rasa. The abhinaya of the Melattur style of abhinaya remains extremely rich in variations of the emotions, while the Pandanallur style expressions are more limited in scope.

Rasa has been an important influence on the cinema of India. The Rasa method of performance is one of the fundamental features that differentiate Indian cinema from that of the Western world. In the Rasa method, empathetic "emotions are conveyed by the performer and thus felt by the audience," in contrast to the Western Stanislavski method where the actor must become "a living, breathing embodiment of a character" rather than "simply conveying emotion." The rasa method of performance is clearly apparent in Malayalam Cinema and internationally acclaimed parallel Bengali films directed by Satyajit Ray. The latter is indebted to the Rasa method of classical Sanskrit drama, in the sense that the complicated doctrine of Rasa "centers predominantly on feeling experienced not only by the characters but also conveyed in a certain artistic way to the spectator. The duality of this kind of a rasa imbrication" shows in The Apu Trilogy (1955–1959), which itself has had a large influence on world cinema.[4]