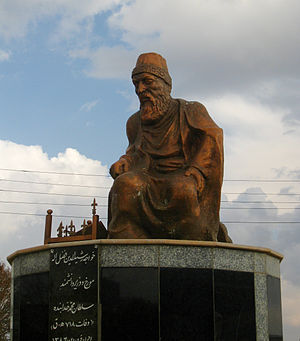 Statue of Rashid-al-Din Hamadani in Persia.

Rashīd al-Dīn Tabīb (Persian: رشیدالدین طبیب‎‎) also Rashīd al-Dīn Fadhl-allāh Hamadānī (1247–1318) (Persian: رشیدالدین فضل‌الله همدانی‎‎), was a Persian statesman, historian and physician.[1] He was born into a Persian Jewish family from Hamedan (Hamadani). A follower of Islam by the time he was 30, Rashid al-Din became the powerful vizier (prime minister) of the Ilkhan Mahmud Ghazan. Later he was commissioned by Ghazan to write the Jami al-Tawarikh, now considered the most important single source for the history of the Ilkhanid period and the Mongolian Empire.[2] He retained his position as a vizier until 1316. After being charged with poisoning the Ilkhanid king Oljeitu, he was executed in 1318.[2]

Historian Morris Rossabi calls Rashid-al-Din "arguably the most distinguished figure in Persia during Mongolian rule".[3] He was a prolific author, and established the Rab'-e Rashidi academic foundation in Tabriz. 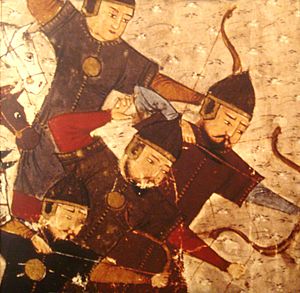 Rashid al-Din was born into a Jewish family at Hamadan, now in Hamadan Province. His grandfather had been a courtier to the founder Ilkhanate ruler Hulagu Khan, and Rashid al-Din's father was an apothecary at the court. He converted to Islam around the age of thirty.[4]

Rashid was trained as a physician and started service under Hulagu's son Abaqa. He rose to become the Grand Vizier of the Ilkhanid court at Soltaniyeh, near Qazvin. He served as vizier and physician under the Ilkhanate emperors Mahmud Ghazan and Oljeitu, before he fell to court intrigues during the reign of Abu Sa'id, whose ministers had him killed at the age of seventy. His son Ghiyath al-Din briefly served as vizier after him.

The Jami al-Tawarikh ("Compendium of Chronicles") was commissioned by Mahmud Ghazan, and initially was a history of the Mongols and their dynasty, but gradually expanded to include the entire history since the time of Adam to Rashid al-Din's time.

Rashid was assisted by Bolad, a Mongol nobleman who was the emissary of the Great Khan to the il-Khanid court. Bolad provided him with much background about Mongol history, especially about the Borjigin clan.

The Compendium was completed between 1307 and 1316, during the reign of Muhammad Khodabandeh (Oljeitu).

The work was executed at the elaborate scriptorium Rab'-e Rashidi at Qazvin, where a large team of calligraphers and illustrators were employed to produce lavishly illustrated books. These books could also be copied, while preserving accuracy, using a printing process imported from China. 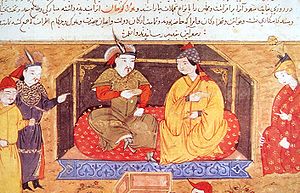 The work was at the time of completion, c. 1307, of monumental size. Several sections have not survived or been discovered. Portions of the Jami al-Tawarikh survive in lavishly illustrated manuscripts, believed to have been produced during his lifetime and perhaps under his direct supervision at the Rab'-e Rashidi workshop.[citation needed]

Volumes II and III of the Jami al-Tawarikh have survived and are of great importance for the study of the Il-Khanate. Volume II is an account of the successors of Genghis Khan while volume III describes the Ilkhanid Dynasty. In his narration down to the reign of Möngke (1251–1259), Juvayni was Rashid al-Din's main source; however, he also utilized numerous now-lost Far Eastern and other sources. The Jami' al-Tawarikh is perhaps the single most comprehensive Persian source on the Mongol period.

For the period of Genghis Khan, his sources included the now lost Altan Debter (Golden Book), and historians find by comparison with material that survives in Chinese sources that he made good use of the source.[citation needed] His treatment of the Ilkhanid period seems to be biased, as he himself was a high official, yet it is still seen as the most valuable written source for the dynasty.

The most important historiographic legacy of the Jami' al-Tawarikh may be its documentation of the cultural mixing and ensuing dynamism that led to the greatness of the Persian and Ottoman empires, many aspects of which were transmitted to Europe and influenced the Renaissance. This was the product of the geographical extension of the Mongol Empire, and is most clearly reflected in this work by Rashid al-Din. The text describes the different peoples with whom the Mongols came into contact and is one of the first attempts to transcend a single cultural perspective and to treat history on a universal scale. The Jami attempted to provide a history of the whole world of that era,[5] though many parts are sadly lost.

One of the volumes of the Jami' al-Tawarikh deals with an extensive History of the Franks (1305/1306), possibly based on information from Europeans working under the Ilkhanates such as Isol the Pisan or Dominican friars, which is a generally consistent description with many details on Europe's political organization, the use of mappae mundi by Italian mariners, and regnal chronologies derived from the chronicle of Martin of Opava (d. 1278).[6] 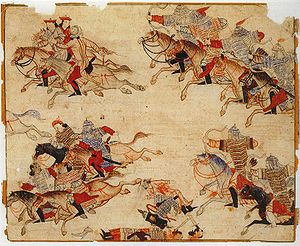 The Mongol cavalry pursuing their enemy. 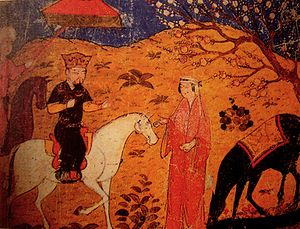 Ghazan on his horse. Rashid al-Din, History of the world.

Rashid al-Din also collected all of his compositions into a single volume, entitled Jami' al-Tasanif al-Rashidi ("The Collected Works of Rashid"), complete with maps and illustrations. He even had some of his shorter works, on medicine and government, translated into Chinese. Anyone who wished was given access to his works and encouraged to copy them. In order to facilitate this, he set aside a fund to pay for the annual transcription of two complete manuscripts of his works, one in Arabic and one in Persian.

The printing process used at the workshop has been described by Rashid al-Din, and bears very strong resemblance to the processes used in the large printing ventures in China under Feng Dao (932–953):

when any book was desired, a copy was made by a skillful calligrapher on tablets and carefully corrected by proof-readers whose names were inscribed on the back of the tablets. The letters were then cut out by expert engravers, and all pages of the books consecutively numbered. When completed, the tablets were placed in sealed bags to be kept by reliable persons, and if anyone wanted a copy of the book, he paid the charges fixed by the government. The tablets were then taken out of the bags and imposed on leaves of paper to obtain the printed sheets as desired. In this way, alterations could not be made and documents could be faithfully transmitted.[7] Under this system he had copies made, lent them to friends, and urged them to transcribe them and return the originals. He had Arabic translations made of those works he composed in Persian, and Persian translations of works composed in Arabic. When the translations had been prepared, he deposited them in the mosque library of the Rab'-e Rashidi.[5]

The authorship of the Jami' al-Tawarikh has been questioned on several grounds.

Abu al-Qasim Kashani, who wrote the most important extant contemporary source on Oljeitu, maintained that he himself was the true author of Jami' al-Tawarikh, "for which Rashid al-Din had stolen not only the credit but also the very considerable financial rewards."[2]

According to Encyclopedia Iranica, "While there is little reason to doubt Rašid-al-Din’s overall authorship of the Jāmeʿ al-tawāriḵ, the work has generally been considered a collective effort, partly carried out by research assistants."[8] Kashani may have been one of those assistants.[8]

Some also contended that it was a translation of a Mongol original.[2]

Authorship of his Letters

Scholars are in dispute about whether Rashid al-Din's Letters are a forgery or not. According to David Morgan in The Mongols[9] Alexander Morton has shown them to be a forgery, probably from the Timurid period.[10] One scholar who has attempted to defend the letters' authenticity is A. Soudovar, in his article "In defense of Rasid-od-din and his Letters".[11]

Loss of influence and death 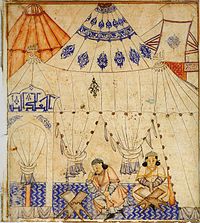 In 1312, his colleague, Sa'd al-Dawla, fell from power and was replaced by Ali Shah. Then, in 1314, Öljaitü died and power passed to his son, Abu Sa'id Bahadur Khan, who sided with 'Ali Shah. In 1318, Rashid al-Din was charged with having poisoned Oljeitu, and was executed on July 13, at the age of seventy.[13]

His property was confiscated and Rab'-e Rashidi, with its scriptorium and its precious copies, was turned over to the Mongol soldiery. A century later, during the reign of Timurlane's son Miran Shah, Rashid ad-Din's bones were exhumed from the Muslim cemetery and reburied in the Jewish cemetery.[14]