Reaction of Russian intelligentsia to the 2014 annexation of Crimea 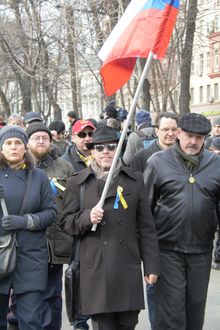 Andrey Makarevich participating in the 2014 anti-war march in Moscow

Russian scientists and artists who disagreed with Russian government policy in Crimea, announced their opposition in an open letter:[1]

"Our country has been plunged into a dangerous adventure. Under the slogan "Defend the Russian in Crimea, as well as all Ukrainians from the new illegitimate, fascist government in Ukraine!", an actual annexation of the Crimea has already happened. International law was heavily violated and principles of European security and stability were destroyed. Russia is rapidly slipping into a new Cold War with the West and there are dangerous consequences that cannot be predicted."

"There is unrestrained flow of lies and disinformation in all Russian state media resources, as well as deafening propaganda campaign against anyone who tries to doubt the legitimacy of the authorities' actions or indicate their disastrous consequences for the country and people. All who disagree indiscriminately get called a "fifth column" and "fascists". There are a lot of people who disagree. It is enough to read uncensored media or numerous judgments in social networks to see that political scientists, economists, people who are professionally related to foreign policy, or just people that are endowed with any social intuition are warning that Russia is coming to a real catastrophe — economic, political, humanitarian."

The letter was published in "Echo of Moscow", "Novaya Gazeta" and "Russian PEN Center".

"Do not cave in. Do not succumb to lies"

Another open letter headlined "Do not cave in. Do not succumb to lies"[2] was signed by 180 representatives of different professions, including: Yuri Ryzhov (of the Russian Academy of Science), Andrey Makarevich (musician), Yuri Shevchuk (musician), Andrey Zvyagintsev (film director), Marietta Chudakova (writer, literary historian) and Vadim Zakharov (artist).

On March 19, 2014 an "Anti-war Congress" took place at the M.I. Rudomino State Library for Foreign Literature. An appeal, adopted by resolution of the Congress, stated:[3][4]

"We, the representatives of the Russian intelligentsia, must warn the government about the historical mistake that is happening — the desire of taking under control part of another, recently brotherly Ukraine, by using Russian armed forces."

Sergei Markov, a member of Civic Chamber of the Russian Federation, commented on the results of the congress and called its participants "representatives of a "Russophobic" subculture that do not pose any danger to the country".[5]

On March 19, 2014 a group of scientists appealed to the Minister of Communications Nikolai Nikiforov, director of Roskomnadzor Alexander Zharov and CEO of the All-Russia State Television and Radio Broadcasting Company Oleg Dobrodeev with a proposition to check for signs of extremism and incitement to international and intergovernmental hostility in the "Vesti nedeli" (News of the Week) newscast of Dmitry Kiselyov for the previous three months:[6][7]

Collection of signatures in support of the document was organized on the website of the inter-regional Society of Scientists (ONR), but was closed soon after with the explanation "by request of ONR members".[8][9]

March 12, 2014 KinoSoyuz (an organization of the Russian film industry) published an open letter of support for their Ukrainian colleagues on its website. By 13 March 2014 the letter had been co-signed by more than 200 people.[10]

After an open letter of support for Russian policy in Crimea was published, on March 11, 2014 a response from Ukraine appeared.[15]