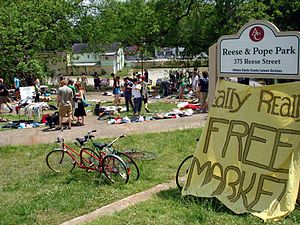 The Really, Really Free Market (RRFM) movement is a horizontally organized collective of individuals who form a temporary market based on an alternative gift economy.[1] The RRFM movement aims to counteract capitalism in a proactive way. It holds as a major goal to build a community based on sharing resources, caring for one another and improving the collective lives of all. Markets often vary in character, but they generally offer both goods and services. Participants bring unneeded items and food, as well as skills and talents such as entertainment or haircuts. A RRFM usually takes place in an open community space such as a public park or community commons. 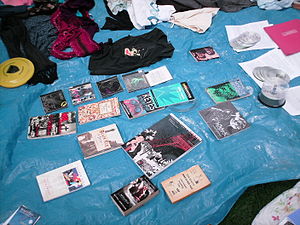 Items laid out on a tarp at the Really Really Free Market at Dupont Circle in Washington, D.C.

RRFM has also spread outside of USA and Canada. Activists in countries like Australia, England, New Zealand, Russia, Malaysia, Taiwan, South Africa, Canada, and others claim to have organized RRFMs.[10] 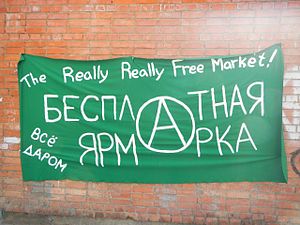 Roll-up at the Absolutely Free Fair in Ivanovo, Russia on 4 August 2012.

Due to the often harsh Russian climate the RRFMs usually take place indoors, but summer time meetings often occur in public parks, yards of apartment houses or city squares. In Ivanovo, for instance, the very first free fair was held in Yesenin Square on 19 June 2011, but as winter set in, the RRFM meetings were moved to the reference room of the Regional Public library.[11]

Participants bring unneeded things, either household goods or one off items. RRFMs are also usually accompanied by master classes in handiwork (mehendi, hair dressing, making stencils for textile printing, etc.), lectures on social and ecological problems and the collection of secondary raw materials and charity fundraising in aid animal shelters. RRFMs also focus on providing participants with hope and opportunities to connect with like-minded people.