From Infogalactic: the planetary knowledge core
Jump to: navigation, search
This article is about the social functions of Hasidic leadership. For the Hasidic theory of leadership, see Tzadik. For other uses, see Rebbe (disambiguation).

Rebbe (Hebrew: רבי‎) /ˈrɛbə/,[1] is a Yiddish word derived from the Hebrew word rabbi, which means "master, teacher, or mentor". Like the title "rabbi" it refers to teachers of Torah or leaders of Jewry.

In common parlance of modern times, the term "The Rebbe" is often used specifically by Hasidim to refer to the leader of their Hasidic movement.[2][3]

The Yiddish term rebbe comes from the Hebrew word rabbi, meaning "My Master", which is the way a student would address a master of Torah. It was an honorific originally given to those who had Smicha in the Pharisaic and Talmudic era. Since vowels were not written at the time, it is impossible to know historically whether it was pronounced rah-bee (/ˈrɑːbi/) or r-bee (/ˈrɛbi/). The English word rabbi (/ˈræbaɪ/) comes directly from this form. In Yiddish, the word became reb-eh (/ˈrɛbɛ/)—now commonly spelled rebbe (/ˈrɛbə/—or just reb (/ˈrɛb/). The word master רב rav [ˈʁäv] literally means "great one".

The Sages of the Mishnah known as the Tannaim, from the 1st and 2nd centuries of the common era, were known by the title Rabbi (/ˈræbi/) (for example, Rabbi Akiva and Rabbi Shimon bar Yochoy). Rabbi Yehuda HaNasi, the leader of Jewry in Mishnaic Times, was simply called Rabbi (/ˈræbi/), as being the rabbi par excellence of his generation.

The Sages of the Talmud known as the Amoraim, from the 3rd, 4th and early 5th centuries, those born in the Land of Israel, are called Rabbi (/ˈræbi/); those born in the diaspora are known by the title Rav (/ˈrɑːv/). 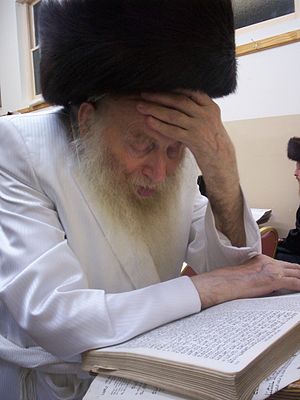 Today, rebbe is used in the following ways:

An ordinary communal rabbi, or "rebbe" in Yiddish, is sometimes distinct from a "Rav" (/ˈræv/, also pronounced "Rov" /ˈrɒv/ by Jews of Eastern European or Russian origin), who is a more authoritative halakhic decider. A significant function of a Rav is to answer questions of halakha (corpus of Jewish law), but he is not as authoritative as a posek. The short form "Reb" is an honorific for Orthodox Jewish men, who are most likely to have profound knowledge of the Talmud and Torah, as opposed to Reconstructionist, Reform or Conservative Judaism. Originally, this title was added to the names of Jews at the time of the schism with the Karaite sect, as a sign of loyalty to the original rabbinic tradition, known today as Orthodox Judaism.[4]

As a rule, among hasidim, rebbe (/ˈrɛbə/) is referred to in Hebrew as "Admor" (pl. admorim), an abbreviation for Hebrew "Adoneinu Moreinu V'Rabeinu", meaning "our Master, our Teacher, and our Rabbi", which is now the modern Hebrew word in Israel for "rebbe".

Hasidim use the term "rebbe" (/ˈrɛbə/) also in a more elevated manner, to denote someone that they perceive not only as the religious leader or nasi[3] of their congregation, but as their spiritual adviser and mentor. "The Rebbe" or "My Rebbe" in this sense is a rav or rabbi whose views and advice are accepted not only on issues of religious law and practice, but in all arenas of life, including political and social issues. Sometimes a hasid has a rebbe as his spiritual guide and an additional rav for rulings on issues of halakha.

Sprouting Hasidim use the concept of a (non-hasidic) rebbe in the simple sense of rabbi, as the Yiddish-German equivalent to the Hebrew word רַבִּי rabi [ˈʁäbi]. For example: "I will ask my rebbe (/ˈrɛbə/), rabbi (/ˈræbaɪ/) Ploni (so-and-so), for advice about this personal matter."

A hasidic rebbe (/ˈrɛbɛ/) is generally taken to mean a great leader of a Hasidic dynasty, also referred to as "Grand Rabbi" in English or an ADMOR, a Hebrew acronym for Adoneinu-Moreinu-veRabbeinu ("our lord/master, teacher, and rabbi"). Outside of Hasidic circles the term "Grand Rabbi" has been used to refer to a rabbi with a higher spiritual status. The practice became widespread in America in the early 1900s when Hasidic rebbes began to emigrate to the United States and was derived from the German Grossrabbiner.

Rabbi Yisroel Baal Shem Tov, the founder of Hasidism, is regarded by Hasidim as the first Hasidic rebbe.[2] During his lifetime he was referred to mainly as "The holy" rather than as "Rebbe", and his disciples were "magidim" or "preachers", such as the Magid of Chernobyl or the Magid of Mezritsh.

The first "rebbe" to be known as such was the Baal Shem Tov's grandson, Rabbi Boruch of Mezhibozh, who was referred to as "The Rebbe" during his lifetime. After him, those who rose to positions of leadership and their successors began to be called rebbe. The title gradually came to suggest a higher spiritual status.

Each Hasidic group refers to its leader as "the rebbe".

Hannah Rachel Verbermacher, also known as the Maiden of Ludmir or the "Ludmirer Moyd", was the only female rebbe in the history of the Hasidic movement; she lived in the 19th century in Ukraine and Israel.[5][6]

Relationship of hasidim to their rebbe

According to Maimonides,[7] a tzadik is "one whose merit surpasses [his/her] iniquity", and every person can reach the level of a Tzadik. According to the Tanya, a tzadik has no evil inclination, and only a select few predestined to attain this level can attain it. According to Kabbalah (and particularly the hasidic understanding of Kabbalah), the world is sustained on the "shoulders" of Tzadikim Nistarim, divinely predestined exceptionally righteous people in a generation. Nobody has knowledge about who was such a tzaddik, even one of these exceptionally righteous people would not know that they really are such a tzadik. These people are understood to have perfected their personal service of God to such an extent that they become literally and physically aware of God. These righteous people's perception (of both spiritual and physical, not to mention temporal matters) transcends the apparent boundaries of existence.

As a result, hasidim in some hasidic circles seek their rebbe's advice for a variety of concerns: spiritual, physical, and even business concerns. Furthermore, many people seek the blessing (bracha) of a rebbe (and a hasid will specifically seek the blessing of his own rebbe) for anything from minor (and all the more so major) physical troubles, to grand spiritual concerns. Many famous and common stories of a rebbe's intervention involve women who successfully seek a rebbe's blessing for fertility so that they can conceive after having been barren for many years. 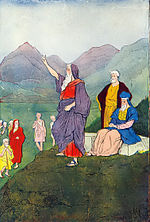 In some movements the hasidim believe that their rebbe is the "tzadik hador" (tzaddik of the generation) and would regard any thought that detracts from his perfection and holiness as heresy. Other sects lessen this idealization to some degree or another. Since many rebbes are sons-in-law or students of other rebbes, it makes sense that they would view themselves as subordinate to those other rebbes. Nonetheless, their hasidim remain loyal to them because of their special loyalty, a family connection, or a belief that a specific tzaddik or Nasi HaDor (although others might have greater spiritual stature) connects best with one's soul. For example, the Kosover Rebbe makes yearly pilgrimages to the Tosher Rebbe. Nonetheless, his followers remain very loyal to him.

Unlike rabbis or non-hasidic rebbes in other Jewish movements, hasidic Judaism considers a 'hasidic rebbe' to be a conduit between Jews and God.[2] On the basis of traditional Kabbalistic concepts and terminology, Hasidic philosophy bridged deveikut, a Jewish concept referring to closeness to God, to the hasidic rebbe, embodying and channeling the Divine flow of blessing to the world, because Creation is dependent on the continuous flow of Divine lifeforce, without which it would revert to nothingness.[8]

Hasidic followers of a rebbe

Given a rebbe's physical awareness of God, and the rebbe's transcendent perception of Godliness, many hasidim take special care to observe the specific and sometimes minute practices of their rebbe. Even things that seem mundane may nonetheless be seen by hasidim as incredibly significant. For example, Lubavitcher hasidim frequently shape their fedoras to match the way that the Lubavitcher Rebbe shaped his hat-which was more flat than many others. Many Skverer hasidim (of the Skverer Rebbe in New Square) wear their peyos identical to those of the Skverer Rebbe. While hasidim do not always follow the specific practices of their rebbe, the rebbe is able to create practices that may be specific and unique to his hasidim. For example, Rabbi Aaron Roth (Reb Areleh, as he was called) the first rebbe of Shomer Emunim, told his hasidim to pause frequently while eating their meals in order to keep them from overindulging. A hasid will usually love his rebbe like a close family member, if not more so. The degree and nature of this belief varies, however, depending on the movement.

Functions of a hasidic rebbe

There are some functions which are exclusively the domain of hasidic rebbes:

Others are not exclusive to Hasidic rebbes, but are often an important part of their role:

A rebbe has times when Hasidim (and other petitioners) may come for a private audience. A kvitel (Yiddish for "note", plural kvitlach) is a note with the name of the petitioner and a short request for which the rebbe is asked to pray. The formula in which a person's name is written is one's own Hebrew name, the son/daughter of one's mother's Hebrew name, such as Shimon ben Rivkah (Simeon the son of Rebecca). Hasidim believe that rebbes read supernaturally "between the lines" of a kvitel, and in every Hasidic movement there are numerous anecdotes relating how the rebbe saw things that were not written in the kvitel. In most Hasidic groups, the kvitel is written by the rebbe's gabbai (secretary), however sometimes the petitioner writes it on his own. Usually, but with some exceptions, a pidyon (redemption) of cash is customarily handed to the rebbe under the kvitel, but this is not obligatory. This is considered to be the conduit through which the blessing is given, and a redemption for the soul of the petitioner. ("A gift makes its receiver glad" is given as an explanation: a blessing only comes from a joyous heart.) It is also customary to tip the gabbai, although this too is not obligatory. 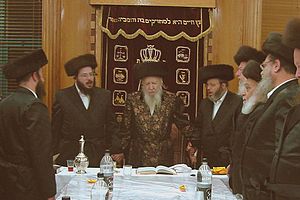 The Bostoner Rebbe feert tish, lit. "runs [a] table" in his synagogue in Beitar Illit

A rebbe conducts a tish (Yiddish: פֿירט טיש‎: feert tish, literally, "to run [a] table") or a farbrengen—a communal festive meal with highly mystical overtones—on Shabbat and other occasions. At a tish, the rebbe distributes shirayim (lit. remnants) to the Hasidim seated at or gathered round the table. When a gathering similar to a tish is led by a rabbi who is not a rebbe, it can be referred to as a botte (esp. amongst groups from Romania) or sheves achim.