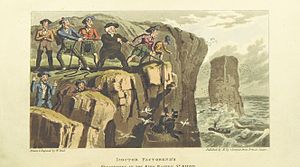 Doctor Factobend's Recantation in the Bird Basket at St Kilda, Scotland a plate from Dr Prosody (by William Combe 1821, ASIN: B007T2QPX8) at p248

Recantation means a personal public act of denial of a previously published opinion or belief It is derived from the Latin retractionem (the nominative form of the verb retractio or the past participle of the noun retractareto, meaning "to pull back").

Philosophically recantation it is linked to a genuine change of opinion, often caused by a serious event which reveals a better or more complete representation of a presumed truth. For example, Recantation was the title of a 16th-century book by Bishop Augustine of Hippo correcting his former writings as a ordinary teacher of rhetoric prior to his becoming a cleric which he described as "a recantation of opinion with admission of error".

In classical Roman poetry, after deliberately describing something extravagantly or hyperbolically for memorable dramatic effect, recantation was used to briefly redefine the material subject fairly and honestly.

In Protestantism, recantation may be requested by or ordered from an ecclesiastical authority such as a synod or ecumenical council

In the Roman Catholic Church, the Inquisition, Holy Office, or even on rare occasion the contemporary Congregation for the Doctrine of the Faith) required an act of renunciation to enforce an orthodoxy.

In a secular state if ordered to recant by religious authority, one who refused to recant may be anathematized or excommunicated or subject to social exclusion.

In a theocracy an order to recant may include threats of physical punishment such as prison or corporal punishment which may include death or lethal cruelty such as the burning at the stake suffered by Jeanne d'Arc.

In this country of England it is thought well to kill an admiral from time to time to encourage the others!