From Infogalactic: the planetary knowledge core
Jump to: navigation, search
Not to be confused with Recursive neural network.

A recurrent neural network (RNN) is a class of artificial neural network where connections between units form a directed cycle. This creates an internal state of the network which allows it to exhibit dynamic temporal behavior. Unlike feedforward neural networks, RNNs can use their internal memory to process arbitrary sequences of inputs. This makes them applicable to tasks such as unsegmented connected handwriting recognition[1] or speech recognition [2]

This is the basic architecture developed in the 1980s: a network of neuron-like units, each with a directed connection to every other unit. Each unit has a time-varying real-valued activation. Each connection has a modifiable real-valued weight. Some of the nodes are called input nodes, some output nodes, the rest hidden nodes. Most architectures below are special cases.

For supervised learning in discrete time settings, training sequences of real-valued input vectors become sequences of activations of the input nodes, one input vector at a time. At any given time step, each non-input unit computes its current activation as a nonlinear function of the weighted sum of the activations of all units from which it receives connections. There may be teacher-given target activations for some of the output units at certain time steps. For example, if the input sequence is a speech signal corresponding to a spoken digit, the final target output at the end of the sequence may be a label classifying the digit. For each sequence, its error is the sum of the deviations of all target signals from the corresponding activations computed by the network. For a training set of numerous sequences, the total error is the sum of the errors of all individual sequences. Algorithms for minimizing this error are mentioned in the section on training algorithms below.

In reinforcement learning settings, there is no teacher providing target signals for the RNN, instead a fitness function or reward function is occasionally used to evaluate the RNN's performance, which is influencing its input stream through output units connected to actuators affecting the environment. Again, compare the section on training algorithms below.

The Hopfield network is of historic interest although it is not a general RNN, as it is not designed to process sequences of patterns. Instead it requires stationary inputs. It is a RNN in which all connections are symmetric. Invented by John Hopfield in 1982, it guarantees that its dynamics will converge. If the connections are trained using Hebbian learning then the Hopfield network can perform as robust content-addressable memory, resistant to connection alteration.

A variation on the Hopfield network is the bidirectional associative memory (BAM). The BAM has two layers, either of which can be driven as an input, to recall an association and produce an output on the other layer.[3] 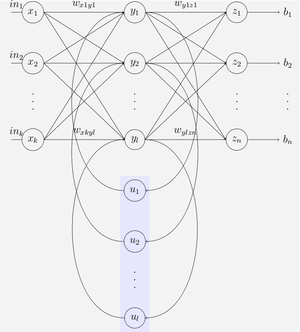 The following special case of the basic architecture above was employed by Jeff Elman. A three-layer network is used (arranged vertically as x, y, and z in the illustration), with the addition of a set of "context units" (u in the illustration). There are connections from the middle (hidden) layer to these context units fixed with a weight of one.[4] At each time step, the input is propagated in a standard feed-forward fashion, and then a learning rule is applied. The fixed back connections result in the context units always maintaining a copy of the previous values of the hidden units (since they propagate over the connections before the learning rule is applied). Thus the network can maintain a sort of state, allowing it to perform such tasks as sequence-prediction that are beyond the power of a standard multilayer perceptron.

The echo state network (ESN) is a recurrent neural network with a sparsely connected random hidden layer. The weights of output neurons are the only part of the network that can change and be trained. ESN are good at reproducing certain time series.[5] A variant for spiking neurons is known as Liquid state machines.[6]

The Long short term memory (LSTM) network, developed by Hochreiter & Schmidhuber in 1997,[7] is an artificial neural net structure that unlike traditional RNNs doesn't have the vanishing gradient problem (compare the section on training algorithms below). It works even when there are long delays, and it can handle signals that have a mix of low and high frequency components. LSTM RNN outperformed other methods in numerous applications such as language learning[8] and connected handwriting recognition.[9]

Invented by Schuster & Paliwal in 1997,[10] bi-directional RNN or BRNN use a finite sequence to predict or label each element of the sequence based on both the past and the future context of the element. This is done by adding the outputs of two RNN, one processing the sequence from left to right, the other one from right to left. The combined outputs are the predictions of the teacher-given target signals. This technique proved to be especially useful when combined with LSTM RNN.[11]

A continuous time recurrent neural network (CTRNN) is a dynamical systems model of biological neural networks. A CTRNN uses a system of ordinary differential equations to model the effects on a neuron of the incoming spike train.

in the network with action potential

the rate of change of activation is given by:

CTRNNs have frequently been applied in the field of evolutionary robotics, where they have been used to address, for example, vision,[12] co-operation[13] and minimally cognitive behaviour.[14]

have been low-pass filtered prior to sampling.

There are many instances of hierarchical RNN whose elements are connected in various ways to decompose hierarchical behavior into useful subprograms.[15][16]

Generally, a Recurrent Multi-Layer Perceptron (RMLP) consists of a series of cascaded subnetworks, each of which consists of multiple layers of nodes. Each of these subnetworks is entirely feed-forward except for the last layer, which can have feedback connections among itself. Each of these subnets is connected only by feed forward connections.[17]

instead of the standard

weights, and inputs and states can be a product. This allows a direct mapping to a finite state machine both in training and in representation[18][19] Long short term memory is an example of this.

MTRNN is a possible neural-based computational model that imitates to some extent, the activity of the brain.[20] [21] It has the ability to simulate the functional hierarchy of the brain through self-organization that not only depends on spatial connection between neurons, but also on distinct types of neuron activities, each with distinct time properties. With such varied neuronal activities, continuous sequences of any set of behaviors are segmented into reusable primitives, which in turn are flexibly integrated into diverse sequential behaviors. The biological approval of such a type of hierarchy has been discussed on the memory-prediction theory of brain function by Jeff Hawkins in his book On Intelligence.

NTMs are a method of extending the capabilities of recurrent neural networks by coupling them to external memory resources, which they can interact with by attentional processes. The combined system is analogous to a Turing Machine or Von Neumann architecture but is differentiable end-to-end, allowing it to be efficiently trained with gradient descent.[22]

First introduced by Kosko,[23] BAM neural networks store associative data as a vector. The bi-directionality comes from passing information through a matrix and its transpose. Typically, bipolar encoding is preferred to binary encoding of the associative pairs. Recently, stochastic BAM models using Markov stepping were optimized for increased network stability and relevance to real-world applications.[24]

To minimize total error, gradient descent can be used to change each weight in proportion to the derivative of the error with respect to that weight, provided the non-linear activation functions are differentiable. Various methods for doing so were developed in the 1980s and early 1990s by Paul Werbos, Ronald J. Williams, Tony Robinson, Jürgen Schmidhuber, Sepp Hochreiter, Barak Pearlmutter, and others.

There also is an online hybrid between BPTT and RTRL with intermediate complexity,[31][32] and there are variants for continuous time.[33] A major problem with gradient descent for standard RNN architectures is that error gradients vanish exponentially quickly with the size of the time lag between important events.[34] [35] The Long short term memory architecture together with a BPTT/RTRL hybrid learning method was introduced in an attempt to overcome these problems.[7]

Training the weights in a neural network can be modeled as a non-linear global optimization problem. A target function can be formed to evaluate the fitness or error of a particular weight vector as follows: First, the weights in the network are set according to the weight vector. Next, the network is evaluated against the training sequence. Typically, the sum-squared-difference between the predictions and the target values specified in the training sequence is used to represent the error of the current weight vector. Arbitrary global optimization techniques may then be used to minimize this target function.

The most common global optimization method for training RNNs is genetic algorithms, especially in unstructured networks.[36][37][38]

Initially, the genetic algorithm is encoded with the neural network weights in a predefined manner where one gene in the chromosome represents one weight link, henceforth; the whole network is represented as a single chromosome. The fitness function is evaluated as follows: 1) each weight encoded in the chromosome is assigned to the respective weight link of the network ; 2) the training set of examples is then presented to the network which propagates the input signals forward ; 3) the mean-squared-error is returned to the fitness function ; 4) this function will then drive the genetic selection process.

Other global (and/or evolutionary) optimization techniques may be used to seek a good set of weights such as Simulated annealing or Particle swarm optimization.

RNNs may behave chaotically. In such cases, dynamical systems theory may be used for analysis.

Most RNNs used to have scaling issues. In particular, RNNs could not be easily trained for large numbers of neuron units nor for large numbers of inputs units. Recent advances in training techniques have greatly increased the capabilities of recurrent neural networks[citation needed]. Successful training has been mostly in time series problems with few inputs and in chemical process control.