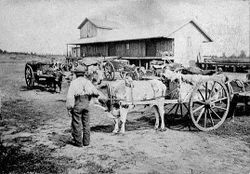 The Red River cart was a large two-wheeled cart made entirely of non-metallic materials. Often drawn by oxen, though also by horses or mules, these carts were used throughout most of the 19th century in the fur trade and in westward expansion in Canada and the United States, in the area of the Red River and on the plains west of the Red River Colony. The cart was a simple conveyance developed by Métis for use in their settlement on the Red River in what later became Manitoba.

According to the journal of North West Company fur-trader Alexander Henry the younger, the carts made their first appearance in 1801 at Fort Pembina, just south of what is now the United States border.[1] Derived either from the two-wheeled charettes used in French Canada or from Scottish carts, it was adapted to use only local materials.[2][3][4]

Because nails were unavailable or very expensive in the early West, these carts contained no iron at all, being entirely constructed of wood and animal hide. The cart was buoyant and could be floated across streams, yet it was strong enough to carry loads as heavy as 1000 lbs (450 kg). Two 12-foot-long (3.7 m) parallel oak shafts or "trams" bracketed the draft animal in front and formed the frame of the cart to the rear. Crosspieces held the floorboards, and front, side and rear boards or rails enclosed the box. These wooden pieces were joined by mortices and tenons. Also of seasoned oak was the axle, lashed to the cart by strips of bison hide or "shaganappi" attached when wet, which shrunk and tightened as they dried. The axles connected two spoked wheels, five or six feet in diameter, which were "dished" or in the form of a shallow cone, the apex of which was at the hub.[5]

Motive power for the carts was originally supplied by small horses obtained from the First Nations. After cattle were brought to the Selkirk Settlement in the 1820s, oxen were used, preferred because of their strength, endurance, and cloven hooves, which spread their weight in swampy areas.[4] The cart, constructed of native materials, could easily be repaired. A supply of shaganappi and wood was brought; a cart could break a half-dozen axles in a one-way trip.[4] The axles were ungreased, as grease would capture dust, which would act as sandpaper and immobilize the cart.[3][4] The resultant squeal sounded like an untuned violin, giving it the sobriquet "the North West fiddle"; one visitor wrote that "a den of wild beasts cannot be compared with its hideousness."[3][6]

The Red River Trails on which the carts were used extended from the Red River Colony via fur-trading posts, such as Pembina and St. Joseph in the Red River Valley, to Mendota and St. Paul, Minnesota. Furs were the usual cargo on the trip to St. Paul, and trade goods and supplies were carried on the trip back to the colony.

The Carlton Trail was also an important route for the carts, running from the Red River Colony west to Fort Carlton and Fort Edmonton in present-day Saskatchewan and Alberta, with branches such as the Fort à la Corne Trail. The carts were the primary conveyance in the Canadian West from early settlement until the coming of the Canadian Pacific Railway toward the end of the century. Carts could not be used west of Fort Edmonton because there were no roads or trails passable by wheeled vehicles over the Rocky Mountains.

Invented and developed by the Métis and Anglo-Metis peoples, it is sometimes used today as a symbol of Métis nationalism.

The Remington Carriage Museum, Cardston, Alberta, also has a full-size replica of a Red River cart.