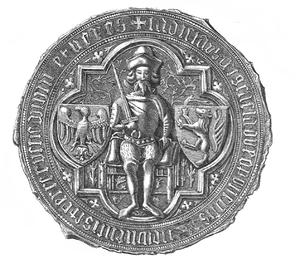 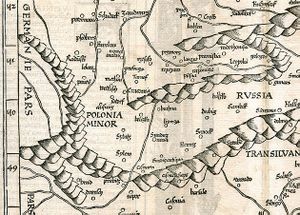 First mentioned in a 1321 Polish chronicle, Red Ruthenia was the portion of Rus' incorporated into Poland by Casimir the Great during the 14th century. Its name reportedly derives from the old Slavonic use of colours for the cardinal points of the compass. That is, the pre-Christian totem-god Svetovid had four faces: his northern face was white, his southern face was black, his eastern face was green and his western face was red. (Critics of this theory point out that Black Ruthenia is west of White Ruthenia.) According to another theory, many place names in the area feature the prefix cherv- (Черв-; czerw-) – which in many Slavic languages means "red". These include the so-called Cherven Cities.

From the 14th century, after the disintegration of Rus', Red Ruthenia was contested by the Grand Duchy of Lithuania (the Gediminids), the Kingdom of Poland (the Piasts), the Kingdom of Hungary and the Kingdom of Ruthenia. After the Galicia–Volhynia Wars, for about 400 years most of Red Ruthenia became part of Poland as the Ruthenian Voivodeship. The historic Red Ruthenia, reaching Przemyśl and Sanok in the southwest, has been primarily inhabited for nearly a millennium by Ruthenians – a term which, in this context, refers to both ethnic Ukrainians and Rusyns.

The first known inhabitants of Red Ruthenia were Lendians,[2] with Boykos and Lemkos on its perimeters. Later Walddeutsche, Jews, Armenians and Poles also made up part of the population.[3] According to Marcin Bielski, although Bolesław I Chrobry settled Germans in the region to defend the borders against Hungary and Kievan Rus' the settlers became farmers. Maciej Stryjkowski described German peasants near Rzeszów, Przemyśl, Sanok, and Jarosław as good farmers. Casimir the Great settled German citizens on the borders of Lesser Poland and Red Ruthenia to join the acquired territory with the rest of his kingdom. In determining the population of late medieval Poland, colonisation and Polish migration to Red Ruthenia, Spiš and Podlachia[4] (whom the Ukrainians called Mazury—poor peasant migrants, chiefly from Mazowsze[5]) should be considered.

During the second half of the 14th century, the Vlachs arrived from the southeastern Carpathians and quickly overspread southern Red Ruthenia. Although during the 15th century the Ruthenians gained a foothold, it was not until the 16th century that the Wallachian population in the Bieszczady Mountains and the Lower Beskids was Ruthenized.[6] From the 14th to the 16th centuries Red Ruthenia underwent rapid urbanization, resulting in over 200 new towns built on the German model (virtually unknown before 1340, when Red Ruthenia was the independent Duchy of Halych).[7] 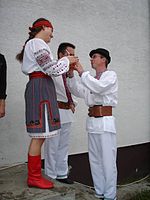 Lemkos in folk costumes from Mokre, near Sanok

During the Middle Ages, the region was part of the Ruthenian Kingdom of Galicia–Volhynia. It came under Polish control in 1340, when Casimir the Great acquired it.[8][9] During his reign from 1333 to 1370, Casimir the Great founded several cities, urbanizing the rural province.[10]

In October 1372, Władysław Opolczyk was deposed as count palatine. Although he retained most of his castles and goods in Hungary, his political influence waned. As compensation, Opolczyk was made governor of Hungarian Galicia. In this new position, he contributed to the economic development of the territories entrusted to him. Although Opolczyk primarily resided in Lwów, at the end of his rule he spent more time in Halicz. The only serious conflict during his time as governor involved his approach to the Russian Orthodox Church, which angered the local Catholic boyars. Under Polish rule 325 towns were founded from the 14th century to the second half of the 17th century, most during the 15th and 16th centuries (96 and 153, respectively).[11]

Red Ruthenia (except for Podolia) was conquered by the Austrian Empire in 1772 during the First Partition of Poland, remaining part of the empire until 1918.[12] Between World Wars I and II, it belonged to the Second Polish Republic. The region is currently split, with its western portion in southeastern Poland (around Rzeaszów, Przemyśl, Zamość and Chełm) and its eastern portion (around Lviv) in western Ukraine.

During the 1340s, the influence of the Rurik dynasty ended; most of the area passed to Casimir the Great, with Kiev and the state of Volhynia falling under Lithuanian control. The Polish region was divided into a number of voivodeships, and an era of German eastward migration and Polish settlement among the Ruthenians began. Armenians and Jews also migrated to the region. A number of castles were built at this time, and the cities of Stanisławów (Stanyslaviv in Ukrainian, now Ivano-Frankivsk) and Krystynopol (now Chervonohrad) were founded. Ruthenia was subject to repeated Tatar and Ottoman Empire incursions during the 16th and 17th centuries and was impacted by the Khmelnytsky Uprising (1648–1654), the 1654–1667 Russo-Polish War and Swedish invasions during the Deluge (1655–1660); the Swedes returned during the Great Northern War of the early 18th century. Red Ruthenia consisted of three voivodeships: Ruthenia, whose capital was Lviv and provinces were Lviv, Halych, Sanok, Przemyśl and Chełm; Bełz, separating the provinces of Lviv and Przemyśl from the rest of the Ruthenian voivodeship; and Podolia, with its capital at Kamieniec Podolski. 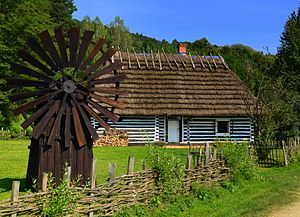 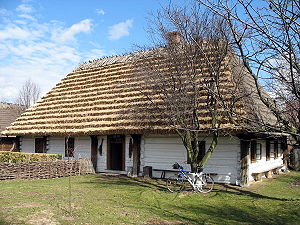 Village of Markowa, about 150-200 km southeast of Kraków. Its 18th- and 19th-century Upper Lusatian houses evoked the mountains of Saxony.[13] 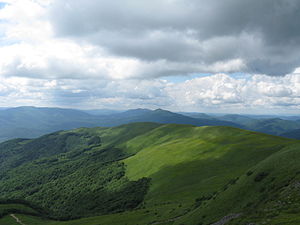 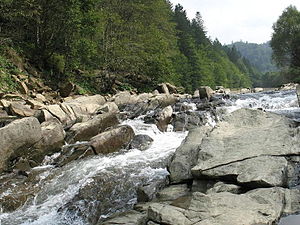 World War I and Polish-Ukrainian War

During World War I, Galicia (Red Ruthenia) saw heavy fighting between Russia and the Central Powers. Russian forces overran most of the region in 1914, after defeating the Austro-Hungarian army in a chaotic frontier battle during the war's opening months; this gave Russia the opportunity to invade Germany from the south. In 1918 western Ruthenia became part of the restored Republic of Poland, and the local Ukrainian population briefly declared independence fpr eastern Galicia as the West Ukrainian People's Republic. These competing claims lead to the Polish–Ukrainian War.

In western Red Ruthenia, Rusyn Lemkos formed the Lemko Republic in 1918 in an attempt to unite with Russian Soviet Republic instead of Ukraine. This proved impossible, and they later attempted to unite with Rusyns from south of the Carpathians to join Czechoslovakia as a third ethnic entity. This effort was suppressed by the Polish government in 1920; the area was incorporated into Poland, and the republican leaders were acquitted by the Polish government. 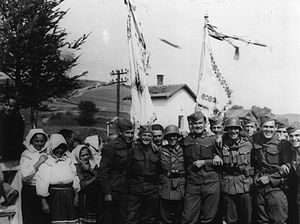 German and Slovak soldiers with Ukrainian civilians in Komańcza, 1939

In 1939 the Supreme Command of the Wehrmacht approved Fall Weiss, detailing the invasion of Poland. According to the plan, Galician military brigades would act as a fifth column, attacking and demoralizing the Polish Army in the rear if Polish resistance was stronger than expected.[15] After September 17, 1939, all territory east of the San, Bug and Neman Rivers (approximating Red Ruthenia) was annexed by the USSR and divided into four oblasts (Lviv, Stanislav, Drohobych and Ternopil, the latter including portions of Volhynia) of the Ukrainian Soviet Socialist Republic.

In 1940–1941, Soviet authorities conducted four mass deportations from the eastern part of the Second Polish Republic inhabited by Ukrainians, Belarusians, Jews, Lithuanians, Russians, Germans, Czechs, Armenians and Poles. Approximately 335,000 Polish citizens were deported to Siberia, Kazakhstan and northeastern European Russia by the NKVD. According to General Vasily Khristoforov, director of the FSB archives in Moscow, 297,280 Polish citizens were deported in 1940.[16]

After June 22, 1941, although Sovietisation ended when Germany occupied eastern Ruthenia during Operation Barbarossa and formed the District of Galicia, the evacuating Soviets killed many prisoners awaiting deportation.[citation needed] Conflicts in Ruthenia and Volhynia between Poles and Ukrainians also intensified during this time, with skirmishes between the Polish Home Army (AK), the Ukrainian Insurgent Army (UPA), the Wehrmacht and Soviet partisans. These conflicts included massacres of Poles in Volhynia and Eastern Galicia and revenge attacks on Ukrainians in Ruthenia. Many Ukrainian Galicians joined the UPA and supported its anti-Soviet and anti-Polish activities; others joined Germany in its fight against the USSR, forming the 14th Waffen Grenadier Division of the SS (1st Galician) commanded by German and Austrian officers Walter Schimana and Fritz Freitag.

The new Polish-Soviet border, with majority-Polish-speaking areas in the west and Ruthenian Ukrainians in the center and east, was recognized by the western Allies at the Yalta Conference. However, there were large minority populations on either side of the new frontier; in 1947's Operation Vistula, Polish Communist authorities moved about 200,000 ethnic Ukrainians to the former eastern territories of Germany.