From Infogalactic: the planetary knowledge core
Jump to: navigation, search
Not to be confused with Red Terror. 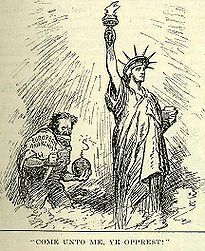 A "European Anarchist" attempts to destroy the Statue of Liberty in this 1919 political cartoon.

A Red Scare is the promotion of fear of a potential rise of communism or other forms of radical leftism such as anarchism, used by anti-leftist proponents. In the United States, the First Red Scare was about worker (socialist) revolution and political radicalism. The Second Red Scare was focused on national and foreign communists influencing society, infiltrating the federal government, or both. In more recent years, the term has been used by right-wing critics to describe a potential Cultural Marxist takeover.

The first Red Scare began following the Bolshevik Russian Revolution of 1917 and the intensely patriotic years of World War I as anarchist and left-wing social agitation aggravated national, social, and political tensions. Political scientist, and former member of the Communist Party Murray B. Levin wrote that the Red Scare was "a nationwide anti-radical hysteria provoked by a mounting fear and anxiety that a Bolshevik revolution in America was imminent—a revolution that would change Church, home, marriage, civility, and the American way of Life."[1] Newspapers exacerbated those political fears into xenophobia—because varieties of radical anarchism were becoming popular as possible solutions to poverty, often by recent European immigrants (cf. hyphenated-Americans). When the Industrial Workers of the World (IWW) backed several labor strikes in 1916 and 1917, the press portrayed them as "radical threats to American society" inspired by "left-wing, foreign agents provocateurs." Those on the side of the IWW claim that the press "misrepresented legitimate labor strikes" as "crimes against society," "conspiracies against the government," and "plots to establish communism."[2] Opponents, on the other hand, saw these as an extension of the radical, anti-capitalist foundations of the IWW, which contends that all workers should be united as a social class and that capitalism and the wage system should be abolished.[3] 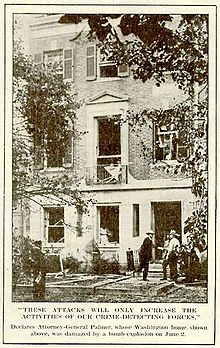 A bomb blast badly damaged the residence of Attorney General Mitchell Palmer in the spring of 1919.

Initially, the press praised the raids; The Washington Post said, "There is no time to waste on hairsplitting over [the] infringement of liberty", and The New York Times said the injuries inflicted upon the arrested were "souvenirs of the new attitude of aggressiveness which had been assumed by the Federal agents against Reds and suspected-Reds."[5] In the event, the Palmer Raids were criticized as unconstitutional by twelve publicly prominent lawyers, including (future Supreme Court Justice) Felix Frankfurter, who published A Report on the Illegal Practices of The United States Department of Justice, documenting systematic violations of the Fourth, Fifth, Sixth, and Eighth Amendments to the U.S. Constitution via Palmer-authorized “illegal acts” and “wanton violence”. Defensively, Palmer then warned that a government-deposing left-wing revolution would begin on 1 May 1920 — May Day, the International Workers’ Day. When it failed to happen, he was ridiculed and lost much credibility. Strengthening the legal criticism of Palmer was that fewer than 600 deportations were substantiated with evidence, out of the thousands of resident aliens illegally arrested and deported. In July 1920, Palmer’s once-promising Democratic Party bid for the U.S. presidency failed.[6] Wall Street was bombed on September 1, 1920, near Federal Hall and the JP Morgan Bank. Although both anarchists and Communists were suspected as being responsible for the bombing, ultimately no individuals were indicted for the bombing in which 38 died and 141 were injured.[7]

In 1919–20, several states enacted "criminal syndicalism" laws outlawing advocacy of violence in effecting and securing social change. The restrictions included free speech limitations.[8] Passage of these laws, in turn, provoked aggressive police investigation of the accused persons, their jailing, and deportation for being suspected of being either communist or left-wing. Regardless of ideological gradation, the Red Scare did not distinguish between communism, anarchism, socialism, or social democracy.[9] 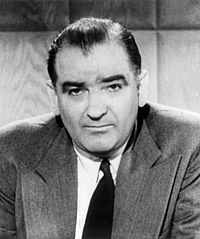 The second Red Scare occurred after World War II (1939–45), and was popularly known as "McCarthyism" after its most famous supporter, Senator Joseph McCarthy. McCarthyism coincided with increased popular fear of communist espionage consequent to a Soviet Eastern Europe, the Berlin Blockade (1948–49), the Chinese Civil War, the confessions of spying for the Soviet Union given by several high-ranking U.S. government officials, and the Korean War.

The events of the late 1940s—the trial of Ethel and Julius Rosenberg, the Iron Curtain (1945–1991) around Eastern Europe, and the Soviet Union’s nuclear weapon—surprised the American public, influencing popular opinion about U.S. National Security, that, in turn, connected to fear of the Soviet Union hydrogen-bombing the United States, and fear of the Communist Party of the United States of America (CPUSA). In Canada, the 1946 Kellock–Taschereau Commission investigated espionage after top secret documents concerning RDX, radar and other weapons were handed over to the Soviets by a domestic spy-ring.[10] At the House Un-American Activities Committee, former CPUSA members and NKVD spies, Elizabeth Bentley and Whittaker Chambers, testified that Soviet spies and communist sympathizers had penetrated the U.S. government before, during and after World War II. Other U.S. citizen spies confessed, some with pride, to their acts of espionage in situations where the statute of limitations on prosecuting them had run out. In 1949, anti–communist fear, and fear of American traitors, was aggravated by the Chinese Communists winning the Chinese Civil War against the Western-sponsored Kuomintang, their founding of the People's Republic of China, and later Chinese intervention in the Korean War (1950–53) against U.S. ally South Korea.

A few of the events during the red scare were also due to a power struggle between J. Edgar Hoover and the Central Intelligence Agency. Hoover had instigated and aided some of the investigations of members of the CIA with "leftist" history, like Cord Meyer.[11] This conflict could also be traced back to the conflict between Hoover and William J. Donovan, going back to the first Red Scare, but especially during World War II. Donovan ran the OSS (CIA's predecessor). They had differing opinions on the nature of the alliance with the Soviet Union, conflicts over jurisdiction, conflicts of personality, the OSS hiring of communists and criminals as agents, etc.[12]

By the 1930s, communism had become an attractive economic ideology among some in the United States, particularly among labor leaders and the intelligentsia. At its zenith in 1939, the CPUSA had some 50,000 members.[13] In 1940, soon after World War II began in Europe, the U.S. Congress legislated the Alien Registration Act (aka the Smith Act, 18 USC § 2385) making it a crime to "knowingly or willfully advocate, abet, advise or teach the duty, necessity, desirability or propriety of overthrowing the Government of the United States or of any State by force or violence, or for anyone to organize any association which teaches, advises or encourages such an overthrow, or for anyone to become a member of or to affiliate with any such association"—and required Federal registration of all foreign nationals. Although principally deployed against communists, the Smith Act was also used against right-wing political threats such as the German-American Bund, and the perceived racial disloyalty of the Japanese-American population, (cf. hyphenated-Americans).

In 1941, after Nazi Germany invaded the Soviet Union, the CPUSA's official position became pro-war, opposing labor strikes in the weapons industry and supporting the U.S. war effort against the Axis Powers. With the slogan "Communism is Twentieth-Century Americanism", the chairman, Earl Browder, advertised the CPUSA's integration to the political mainstream.[14] In contrast, the Trotskyist Socialist Workers Party opposed U.S. participation in the war and supported labor strikes, even in the war-effort industry. For this reason, James P. Cannon and other SWP leaders were convicted per the Smith Act.

In March 1947, President Harry S. Truman signed Executive Order 9835, creating the "Federal Employees Loyalty Program" establishing political-loyalty review boards who determined the "Americanism" of Federal Government employees, and recommended termination of those who had confessed to spying for the Soviet Union, as well as some suspected of being "Un-American". It also was the template for several state legislatures' loyalty acts, such as California's Levering Act. The House Committee on Un-American Activities (HUAC) and the committees of Senator Joseph McCarthy (R., Wisc.) conducted character investigations of "American communists" (actual and alleged), and their roles in (real and imaginary) espionage, propaganda, and subversion favoring the Soviet Union—in the process revealing the extraordinary breadth of the Soviet spy network in infiltrating the federal government; the process also launched the successful political career of Richard Nixon, and Robert F. Kennedy,[15] as well as that of Joseph McCarthy. McCarthy, a freshman Senator who died soon thereafter, realized little political gain from the process.

Senator McCarran introduced the McCarran Internal Security Act of 1950 that was passed by the U.S. Congress and which modified a great deal of law to restrict civil liberties in the name of security. President Truman declared the act a "mockery of the Bill of Rights" and a "long step toward totalitarianism" because it represented a government restriction on the freedom of opinion. He vetoed the act but his veto was overturned by Congress.[16] Much of the bill eventually was repealed.

The Second Red Scare profoundly altered the temper of American society. Its later characterization as anti-intellectual may be seen as contributory to the popularity of anti-communist espionage (My Son John, 1950) and science fiction movies (The Thing From Another World, 1951) with stories and themes of the infiltration, subversion, invasion, and destruction of American society by un–American thought and inhuman beings. Even a baseball team, the Cincinnati Reds, temporarily renamed themselves the "Cincinnati Redlegs" to avoid the money-losing and career-ruining connotations inherent in being ball-playing "Reds" (communists).

In 1995, the American government revealed details of the Venona Project which gave indication of intelligence gathering by Americans for the Soviet Union from 1940 through 1980.[17][18]

Listen to this article (info/dl)
200px

This audio file was created from a revision of the "Red Scare" article dated 2012-07-11, and does not reflect subsequent edits to the article. (Audio help)
More spoken articles