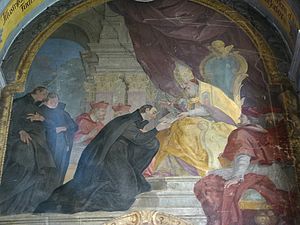 Fresco of Approving of bylaw of Society of Jesus depicting Ignatius of Loyola receiving the papal bull Regimini militantis Ecclesiae from Pope Paul III. Fresco was made by Johann Christoph Handke in Church of Our Lady Of the Snow in Olomouc after 1743.

Regimini militantis Ecclesiae (Latin for To the Government of the Church Militant) was the papal bull promulgated by Pope Paul III on September 27, 1540, which gave a first approval to the Society of Jesus, also known as the Jesuits, but limited the number of its members to sixty.

Ignatius of Loyola and his companions had made their way to Rome in October 1538, to offer their priestly services to the Pope. As they were about to be dispersed by the various missions given them by the Pope, the question arose as to whether they wished to remain spiritually "one". After prayer and discussion they decided positively, as Christ had brought them together, they felt it was His will they remain united. A charter was proposed to the Pope, which was received favourably and ultimately given solemn approval in this Regimini Militantis Ecclesiae of 1540. [1] The first group of Jesuits, then known simply as "reformed priests", proceeded then to elect Ignatius of Loyola as their Superior General, against his opposition, and pledged him obedience, recognizing him as "holding the place of God" in relation to them.

The papal text includes what is known as the Formula Instituti. Later on, more developed Constitutions were written and approved by the first General Chapter (called "General Congregation") of the Society of Jesus, called in 1558 to elect the successor of Ignatius of Loyola.

The final approval, with the removal of the restriction on the membership number, came in the bull Exposcit debitum (en: The duty requires ...) of July 21, 1550, issued by Pope Julius III.