The Reichsmarine (English: Navy of the Realm) was the name of the German Navy during the Weimar Republic and first two years of Nazi Germany.[1] It was the naval branch of the Reichswehr, existing from 1919 to 1935. In 1935, it became known as the Kriegsmarine, a branch of the Wehrmacht; a change implemented by Adolf Hitler.

The Vorläufige Reichsmarine (Provisional Imperial Navy) was formed after the end of World War I from the Kaiserliche Marine.

The provisions of the Versailles Treaty restricted the German Navy to 15,000 men and no submarines, while the fleet was limited to six pre-dreadnought battleships, six cruisers and 12 destroyers. Replacements for the outdated battleships were restricted to a maximum size of 10,000 tons. 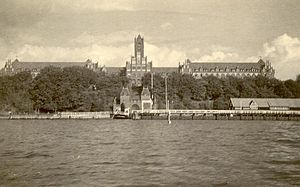 The Naval Academy Mürwik in 1929 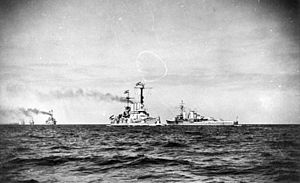 Units of the Reichsmarine on maneuvers in 1929. A Königsberg-class cruiser is on the right.

The Treaty of Versailles limited the size and armament of the Reichsmarine and prevented it from introducing new technologies. The restrictions were intended to prevent the German Navy from becoming a threat to the Allied powers. On the other hand, the Allies had made certain that the Reichsmarine would be in the foreseeable future the strongest power in the Baltic Sea, in order to serve as a counterweight against the new Soviet Union, which was viewed with distrust by the Allies.

Germany was only allowed six battleships, six cruisers, twelve destroyers, and twelve torpedo boats. The Reichsmarine tried to meet the arms restrictions with secret armament and technical innovations such as the introduction of the pocket battleship. The legal weight limit for the ships were 35,000 tons.