From Infogalactic: the planetary knowledge core
Jump to: navigation, search
For a detailed discussion of the English translation of Reich, see Reich.

Reichspost (German for "Empire Post") was the name of several postal authorities in Germany. It may refer to one of these entities: 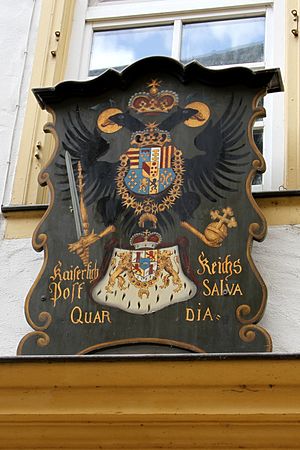 The Imperial Reichspost (Kaiserliche Reichspost) was the name of the country-wide postal service of the Holy Roman Empire, founded by Jannetto de Tassis in 1495. The Bergamascan Tasso family had built up postal routes throughout Italy since c. 1290 and Jannetto's uncle[citation needed] Ruggiero had worked for Frederick III since the mid-15th century. Ruggiero had already connected Vienna and Innsbruck with Italy, Styria, and Brussels, before Maximilian expanded from those routes throughout his realm. Maximilian's Philip of Burgundy appointed Jannetto's brother Francisco as capitaine et maistre de nos postes in 1502 and it was a payment dispute between the two which caused Francisco to open the family's network to public correspondence in 1506. Charles V confirmed Jannetto's son Giovanni Battista as Postmaster General (chief et maistre general de noz postes par tous noz royaumes, pays, et seigneuries) in 1520. Confirmed by Emperor Rudolph II in 1595, the Imperial postal service remained a monopoly of the Thurn und Taxis family (officially hereditary from 1615 onwards) until it was terminated with the end of the Empire in 1806.

The Imperial Reichspost was based in Brussels in the Spanish Netherlands, from where the original ("Dutch") route led via Namur, Bastogne, Lieser, Wöllstein, Rheinhausen, and Augsburg to Innsbruck and Trento. It was also used to bypass the Kingdom of France in order to keep in touch with Habsburg Spain during times of hostility. Competing services were prohibited, although the Imperial cities were permitted to maintained their own communication system.

After the accession of Rudolph's brother Emperor Matthias in 1612, a second route was established from Cologne via Frankfurt, Aschaffenburg, and Nuremberg to Bohemia and later also to Leipzig and Hamburg. After the Thirty Years' War and the Peace of Westphalia, Postmaster General Count Lamoral II Claudius Franz von Thurn und Taxis and his successors had to deal with the establishment of separate postal agencies, mainly by the Protestant Imperial States of Northern German but also in several lands of the Habsburg Monarchy, leading to long-lasting disputes over their range of authority. In the course of the War of the Spanish Succession, the Thurn und Taxis seat was relocated from Brussels to the Free City of Frankfurt in 1702.

Though the dynasty had sided with the Wittelsbach rival Charles VII in the War of the Austrian Succession, their services were indispensable, and Maria Theresa's husband Emperor Francis I officially re-implemented the Thurn und Taxis monopoly in 1746. Two years later, the postal authority moved to Regensburg, seat of the Imperial Diet. The family had accumulated extreme wealth; nonetheless, it was devastated by the Napoleonic Wars. The last Postmaster General, Prince Karl Alexander von Thurn und Taxis, lost his office with the Empire's dissolution on 6 August 1806, but his postal authority continued as the Frankfurt-based Thurn-und-Taxis Post until the unification of Germany. 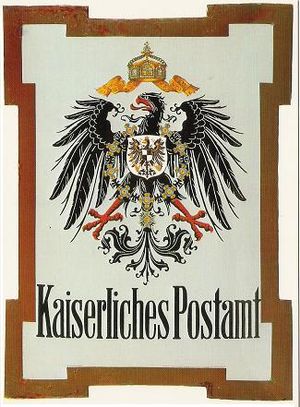 Upon the Austro-Prussian War of 1866 and the break-up of the German Confederation in the Peace of Prague, the North German Confederation was established, instigated by the Prussian minister-president Otto von Bismarck. Originally a military alliance, it evolved to a federation with the issuing of a constitution with effect from 1 July 1867. In the course of the war, Prussian troops had occupied the Free City of Frankfurt and the King of Prussia (later to become Emperor of Germany) had purchased the remnants of the Thurn-und-Taxis Post organisation. According to article 48, the federal area of the Northern German states, de facto an enlarged Prussia, came under the united postal authority, led by director Heinrich von Stephan.

With the German unification upon the Franco-Prussian War of 1870/71, the Deutsche Reichspost was established as a state monopoly and became the official national postal authority of the German Empire including the annexed province of Alsace-Lorraine. Its official name was Kaiserliche Post und Telegraphenverwaltung. The Southern German federated states of Baden (until 1872), Württemberg (until 1902) and Bavaria initially maintained separate state post authorities, that nevertheless were integrated into the nationwide administration. On 1 January 1876 a Reichspostamt under Postmaster General von Stephan was split off Bismarck's Reich Chancellery as a government agency in its own right. In the First World War, a Reichsabgabe tax was levied on the postal traffic from 1 August 1916 in order to finance the war expenses. 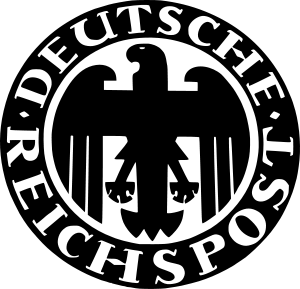 With the establishment of the Weimar Republic upon the German Revolution of 1918–1919, the former Reichspostamt in Berlin became the Reichspostministerium. After the hyperinflation period, the Deutsche Reichspost (DRP) agency was again spun off in 1924 and operated as a state-owned enterprise. On 2 June 1932 Paul Freiherr von Eltz-Rübenach was appointed Reichspost Minister by Chancellor Franz von Papen and he maintained his office upon the Machtergreifung of the Nazi Party in 1933, 'assisted' by Nazi state secretary Wilhelm Ohnesorge. The postal area was significantly enlarged with the incorporation of the Saar territory in 1935, the Austrian Anschluss in 1938 and the annexation of the Sudetenland according to the Munich Agreement.

In the Second World War the Reichspost authority spread out to the Polish areas annexed by Nazi Germany, such as the Reichsgau Wartheland, the Reichsgau Danzig-Westpreußen, and the Polish General Government. In 1941 postal codes were introduced. The Feldpost military mail organisation of the Wehrmacht not only served Army, Luftwaffe and Kriegsmarine service members, but also SS-Verfügungstruppen, Waffen-SS and Reichsarbeitsdienst members in the field, becoming the general postal authority of the occupied territories. Deliveries were more and more affected by the advance of Allied troops from January 1945 on. The Reichspost finally ceased to function with the German Instrument of Surrender on May 8. The last Reichspostminister Julius Dorpmüller, member of the Flensburg Government, was arrested two weeks later, the governmental authority was officially taken over by the Allied Control Council with the Berlin Declaration of June 5.

The Reichspost was initially replaced by Allied-controlled postal authorities that provided mail services in the occupation zones. From 1947 a united agency served the British-American Bizone area. With the emergence of two German states, the Deutsche Bundespost (German federal post office) was established in West Germany, and the Deutsche Post in East Germany. In addition, there was a separate Deutsche Bundespost Berlin for West Berlin, as well as the Saar postal authority (1947-1956).

After the reunification of Germany in 1990, the state-owned Bundespost continued to function as the sole provider of postal services until 1995, when the postal, telecommunications, and banking divisions were spun off as separate entities. The Deutsche Bundespost eventually became Deutsche Post AG, a share holding company, later reintegrating the Postbank, and Deutsche Telekom.[1]