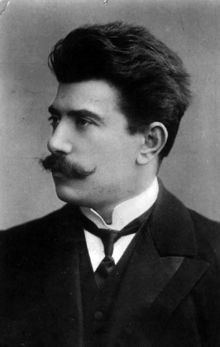 Reinhold Glière as a young man.

Glière was born in Kiev, Ukraine, then in the Russian Empire. He was the second son of the wind instrument maker Ernst Moritz Glier (1834–1896) from Saxony (Klingenthal), who emigrated to the Russian Empire and married Józefa (Josephine) Korczak (1849–1935), the daughter of his master, from Warsaw, Poland. His original name, as given in his baptism certificate, was Reinhold Ernest Glier.[1] About 1900 he changed the spelling and pronunciation of his surname to Glière, which gave rise to the legend, stated by Leonid Sabaneyev for the first time (1927), of his French or Belgian descent.[2]

He entered the Kiev school of music in 1891, where he was taught violin by Otakar Ševčík, among others. In 1894 Glière entered the Moscow Conservatory where he studied with Sergei Taneyev (counterpoint), Mikhail Ippolitov-Ivanov (composition), Jan Hřímalý (violin; he dedicated his Octet for Strings, Op. 5, to Hřímalý), Anton Arensky and Georgi Conus (both harmony). He graduated in 1900, having composed a one-act opera Earth and Heaven (after Lord Byron) and received a gold medal in composition.[1] In the following year Glière accepted a teaching post at the Moscow Gnesin School of Music. Taneyev found two private pupils for him in 1902: Nikolai Myaskovsky and the eleven-year-old Sergei Prokofiev, whom Glière taught on Prokofiev's parental estate Sontsovka.[3] Glière studied conducting with Oskar Fried in Berlin from 1905 to 1908. One of his co-students was Serge Koussevitzky, who conducted the premiere of Glière's Symphony No. 2, Op. 25, on 23 January 1908 in Berlin. Back in Moscow, Glière returned again to the Gnesin School. In the following years Glière composed the symphonic poem Sireny, Op. 33 (1908), the programme symphony Ilya Muromets, Op. 42 (1911) and the ballet-pantomime Chrizis, Op. 65 (1912). In 1913 he gained an appointment to the school of music in Kiev, which was raised to the status of conservatory shortly after, as Kiev Conservatory. A year later he was appointed director. In Kiev he taught among others Levko (Lev) Revoutski, Borys Lyatoshynsky and Vladimir Dukelsky (who became well known in the West as Vernon Duke).

In 1920 Glière moved to the Moscow Conservatory where he (intermittently) taught until 1941. Boris Alexandrov, Aram Khachaturian, Alexander Davidenko, Lev Knipper and Alexander Mosolov were some of his pupils from the Moscow era. For some years he held positions in the organization Proletkul't and worked with the People's Commissariat for Education. The theatre was in the centre of his work now. In 1923 Glière was invited by the Azerbaijan People's Commissariat of Education to come to Baku and compose the prototype of an Azerbaijani national opera. The result of his ethnographical research was the opera Shakh-Senem, now considered the cornerstone of the Soviet-Azerbaijan national opera tradition. Here the musical legacy of the Russian classics from Glinka to Scriabin is combined with folk song material and some symphonic orientalisms. In 1927, inspired by the ballerina Yekaterina Vasilyevna Geltzer (1876–1962), he wrote the music for the ballet Krasny mak (The Red Poppy), later revised, to avoid the connotation of opium, as Krasny tsvetok (The Red Flower, 1955). The Red Poppy was praised "as the first Soviet ballet on a revolutionary subject". Perhaps this is his most famous work in Russia as well as abroad. One number from the score, his arrangement of an Russian folk chastushka song Yablochko ("little apple") consists of an introduction, a basso statement of the theme, and a series of increasingly frenetic variations ending with a powerful orchestral climax. It is identified in the ballet score by its almost equally well-known name, the Russian Sailor's Dance. It is probably his best-known single piece, and is still heard at symphony concerts around the world, frequently as an encore. The ballet-pantomime Chrizis was revised just after The Red Poppy, in the late 1920s, followed by the popular ballet Comedians after Lope de Vega (1931, later re-written and renamed The Daughter from Castile).

After 1917 Glière never visited the West as some other Soviet composers did. He gave concerts in Siberia and other remote areas of the Soviet Union instead. He was working in Uzbekistan as a "musical development helper" at the end of the 1930s. From this time emerged the "drama with music" Gyulsara and the opera Leyli va Medzhnun, both composed with the Uzbek Talib Sadykov (1907–1957). From 1938 to 1948 Glière was Chairman of the Organization Committee of the Soviet Composers Association. Before the revolution Glière had already been honoured three times with the Glinka prize. During his last few years he was very often awarded: Azerbaijan (1934), the Russian Soviet Republic (1936), Uzbekistan (1937) and the USSR (1938) appointed him Artist of the People. The title "Doctor of Art Sciences" was awarded to him in 1941. He won first degree Stalin Prizes: in 1946 (Concerto for Voice and Orchestra), 1948 (Fourth String Quartet), and 1950 (The Bronze Horseman).

As Taneyev's pupil and an 'associated' member of the circle around the Petersburg publisher Mitrofan Belyayev, it appeared Glière was destined to be a chamber musician. In 1902 Arensky wrote about the Sextet, Op. 1, "one recognizes Taneyev easily as a model and this does praise Glière". Unlike Taneyev, Glière felt more attracted to the national Russian tradition as he was taught by Rimsky-Korsakov's pupils Ippolitov-Ivanov and Arensky. Alexander Glazunov even certified an "obtrusively Russian style" to Glière's 1st Symphony. After all he finds with the 3rd Symphony Ilya Muromets a synthesis between national Russian tradition and impressionistic refinement. The première was in Moscow in 1912, and it resulted in the award of the Glinka Prize. The symphony depicts in four tableaux the adventures and death of the Russian hero Ilya Muromets. This work was widely performed, in Russia and abroad, and earned him world-wide renown. It became one of the favourite items in the extensive repertoire of Leopold Stokowski, who made, with Glière's approval, an abridged version, shortened to around the half the length of the original. Today's cult status of Ilya Muromets is based not least on the pure dimensions of the original 80 minute work, but Ilya Muromets demonstrates the high level of Glière's artistry. The work has a comparatively modern tonal language, massive Wagnerian instrumentation and long lyrical lines.

Notwithstanding his political engagement after the October revolution Glière kept out of the ideological ditch war between the Association for Contemporary Music (ASM) and the Russian Association of Proletarian Musicians (RAPM) during the late 1920s. Glière concentrated primarily on composing monumental operas, ballets, and cantatas. His symphonic idiom, which combined broad Slavonic epics with cantabile lyricism, is governed by rich, colourful harmony, bright and well-balanced orchestral colours and perfect traditional forms. Obviously this secured his acceptance by Tsarist and Soviet authorities, at the same time creating resentment from many composers who suffered intensely under the Soviet regime. As the last genuine representative of the pre-revolutionary national Russian school, i.e. a 'living classic', Glière was immune to the standard reproach of "formalism" (mostly equivalent to "modernity" or "bourgeois decadence"). Thus the infamous events of 1936 and 1948 passed Glière by.

The concerti for harp (Op. 74, 1938), coloratura soprano (Op. 82, 1943), cello (Op. 87, 1946, dedicated to Sviatoslav Knushevitsky), and horn (Op. 91, 1951, dedicated to Valery Polekh), which attained popularity also in the West, have to be mentioned as 'virtuoso use music'. Nearly unexplored are Glière's educational compositions, his chamber works, piano pieces and songs from his time at the Moscow Gnesin School of Music.

He died in Moscow.