On spaceships, map-clocks may look unsynchronized. 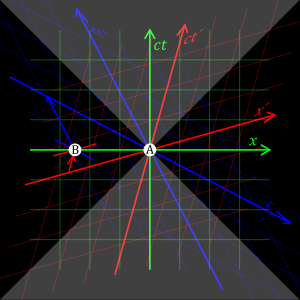 Event B is simultaneous with A in the green reference frame, but it occurred before in the blue frame, and will occur later in the red frame.

Events A, B, and C occur in different order depending on the motion of the observer. The white line represents a plane of simultaneity being moved from the past to the future.

In physics, the relativity of simultaneity is the concept that distant simultaneity – whether two spatially separated events occur at the same time – is not absolute, but depends on the observer's reference frame.

According to the special theory of relativity, it is impossible to say in an absolute sense that two distinct events occur at the same time if those events are separated in space. For example, a car crash in London and another in New York, which appear to happen at the same time to an observer on the earth, will appear to have occurred at slightly different times to an observer on an airplane flying between London and New York. The question of whether the events are simultaneous is relative: in the stationary earth reference frame the two accidents may happen at the same time but in other frames (in a different state of motion relative to the events) the crash in London may occur first, and in still other frames the New York crash may occur first. However, if the two events could be causally connected (i.e. the time between event A and event B is greater than the distance between them divided by the speed of light), the order is preserved (i.e., "event A precedes event B") in all frames of reference.

If we imagine one reference frame assigns precisely the same time to two events that are at different points in space, a reference frame that is moving relative to the first will generally assign different times to the two events. This is illustrated in the ladder paradox, a thought experiment which uses the example of a ladder moving at high speed through a garage.

A mathematical form of the relativity of simultaneity ("local time") was introduced by Hendrik Lorentz in 1892, and physically interpreted (to first order in v/c) as the result of a synchronization using light signals by Henri Poincaré in 1900. However, both Lorentz and Poincaré based their conceptions on the aether as a preferred but undetectable frame of reference, and continued to distinguish between "true time" (in the aether) and "apparent" times for moving observers. It was Albert Einstein in 1905 who abandoned the (classical) aether and emphasized the significance of relativity of simultaneity to our understanding of space and time. He deduced the failure of absolute simultaneity from two stated assumptions: 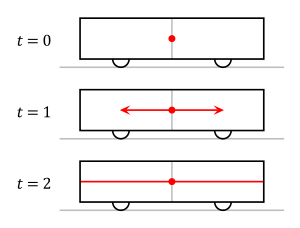 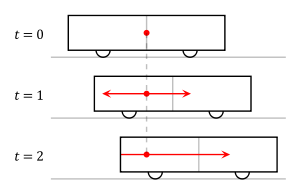 A popular picture for understanding this idea is provided by a thought experiment consisting of one observer midway inside a speeding traincar and another observer standing on a platform as the train moves past. It is similar to thought experiments suggested by Daniel Frost Comstock in 1910[1] and Einstein in 1917.[2][3] 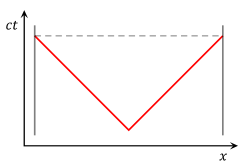 The spacetime diagram in the frame of the observer on the train. 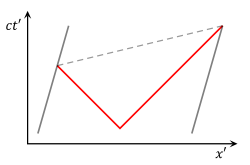 The same diagram in the frame of an observer who sees the train moving to the right.

It may be helpful to visualize this situation using spacetime diagrams. For a given observer, the t-axis is defined to be a point traced out in time by the origin of the spatial coordinate x, and is drawn vertically. The x-axis is defined as the set of all points in space at the time t = 0, and is drawn horizontally. The statement that the speed of light is the same for all observers is represented by drawing a light ray as a 45° line, regardless of the speed of the source relative to the speed of the observer. 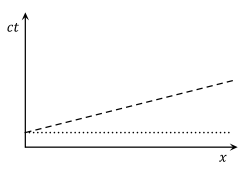 The equation t' = constant defines a "line of simultaneity" in the (x', t' ) coordinate system for the second (moving) observer, just as the equation t = constant defines the "line of simultaneity" for the first (stationary) observer in the (x, t) coordinate system. We can see from the above equations for the Lorentz transform that t' is constant if and only if t – v x/c2 = constant. Thus the set of points that make t constant are different from the set of points that makes t' constant. That is, the set of events which are regarded as simultaneous depends on the frame of reference used to make the comparison.

Graphically, this can be represented on a space-time diagram by the fact that a plot of the set of points regarded as simultaneous generates a line which depends on the observer. In the space-time diagram, the dashed line represents a set of points considered to be simultaneous with the origin by an observer moving with a velocity v of one-quarter of the speed of light. The dotted horizontal line represents the set of points regarded as simultaneous with the origin by a stationary observer. This diagram is drawn using the (x, t) coordinates of the stationary observer, and is scaled so that the speed of light is one, i.e., so that a ray of light would be represented by a line with a 45° angle from the x axis. From our previous analysis, given that v = 0.25 and c = 1, the equation of the dashed line of simultaneity is t – 0.25x = 0 and with v = 0, the equation of the dotted line of simultaneity is t = 0.

It should also be mentioned that Lorentz came up with his ideas based on the assumption that the aether existed. 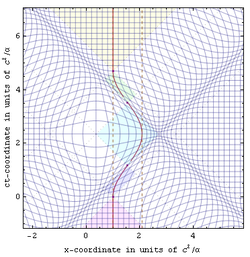 The Lorentz-transform calculation above uses a definition of extended-simultaneity (i.e. of when and where events occur at which you were not present) that might be referred to as the co-moving or "tangent free-float-frame" definition. This definition is naturally extrapolated to events in gravitationally-curved spacetimes, and to accelerated observers, through use of a radar-time/distance definition that (unlike the tangent free-float-frame definition for accelerated frames) assigns a unique time and position to any event.[4]

The radar-time definition of extended-simultaneity further facilitates visualization of the way that acceleration curves spacetime for travelers in the absence of any gravitating objects. This is illustrated in the figure at right, which shows radar time/position isocontours for events in flat spacetime as experienced by a traveler (red trajectory) taking a constant proper-acceleration roundtrip. One caveat of this approach is that the time and place of remote events is not fully defined until light from such an event is able to reach our traveler. 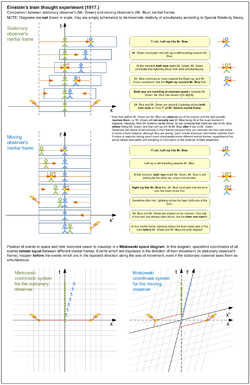 In 1892 and 1895, Hendrik Lorentz used a mathematical method called "local time" t' = t – v x/c2 for explaining the negative aether drift experiments.[5] However, Lorentz gave no physical explanation of this effect. This was done by Henri Poincaré who already emphasized in 1898 the conventional nature of simultaneity and who argued that it is convenient to postulate the constancy of the speed of light in all directions. However, this paper does not contain any discussion of Lorentz's theory or the possible difference in defining simultaneity for observers in different states of motion.[6][7] This was done in 1900, when he[vague] derived local time by assuming that the speed of light is invariant within the aether. Due to the "principle of relative motion", moving observers within the aether also assume that they are at rest and that the speed of light is constant in all directions (only to first order in v/c). Therefore, if they synchronize their clocks by using light signals, they will only consider the transit time for the signals, but not their motion in respect to the aether. So the moving clocks are not synchronous and do not indicate the "true" time. Poincaré calculated that this synchronization error corresponds to Lorentz's local time.[8][9] In 1904, Poincaré emphasized the connection between the principle of relativity, "local time", and light speed invariance; however, the reasoning in that paper was presented in a qualitative and conjectural manner.[10][11]

Albert Einstein used a similar method in 1905 to derive the time transformation for all orders in v/c, i.e., the complete Lorentz transformation. Poincaré obtained the full transformation in 1905 but in the papers of that year he did not mention his synchronization procedure. This derivation was completely based on light speed invariance and the relativity principle, so Einstein noted that for the electrodynamics of moving bodies the aether is superfluous. Thus, the separation into "true" and "local" times of Lorentz and Poincaré vanishes – all times are equally valid and therefore the relativity of length and time is a natural consequence.[12][13][14]

In 1908, Hermann Minkowski introduced the concept of a world line of a particle[15] in his model of the cosmos called Minkowski space. The mathematical model of spacetime is an affine geometry equipped with a quadratic form that measures intervals between events. (When the events are connected by light, the interval is zero.) In Minkowski's system, there is a simultaneous hyperplane determined by the quadratic form at each event along a world line. This simultaneous hyperplane depends on the velocity of the particle, and thus is relative to velocity.