Religious censorship is a form of censorship where freedom of expression is controlled or limited using religious authority or on the basis of the teachings of the religion. This form of censorship has a long history and is practiced in many societies and by many religions. Examples include the Edict of Compiègne, the Index Librorum Prohibitorum (list of prohibited books) and the condemnation of Salman Rushdie's novel The Satanic Verses by Iranian leader Ayatollah Ruhollah Khomeini.

Religious censorship is defined as the act of suppressing views that are contrary of those of an organized religion. It is usually performed on the grounds of blasphemy, heresy, sacrilege or impiety - the censored work being viewed as obscene, challenging a dogma, or violating a religious taboo. Defending against these charges is often difficult as some religious traditions permit only the religious authorities (clergy) to interpret doctrine and the interpretation is usually dogmatic. For instance, the Catholic Church banned hundreds of books on such grounds and maintained the Index Librorum Prohibitorum (list of prohibited books), most of which were writings that the Church's Holy Office had deemed dangerous, until the Index's abolishment in 1965.

The invention of the printing press by Johannes Gutenberg around 1440 changed the nature of book publishing.[1] As of the 16th century, in most European countries both the church and governments attempted to regulate and control printing. Governments established controls over printers across Europe, requiring them to have official licenses to trade and produce books.[2][3] In 1557 the English Crown aimed to stem the flow of dissent by chartering the Stationers' Company. The right to print was restricted to the two universities (Oxford and Cambridge) and the 21 existing printers in the City of London. In France, the 1551 Edict of Châteaubriant included provisions for unpacking and inspecting all books brought into France.[4][5] The 1557 Edict of Compiègne applied the death penalty to heretics and resulted in the burning of a noblewoman at the stake.[6]

A first version of the Index Librorum Prohibitorum ("List of Prohibited Books") was promulgated by Pope Paul IV in 1559, and multiple revisions were made to it over the years.

Some works named in the Index Librorum Prohibitorum are the writings of Desiderius Erasmus, a Catholic scholar who argued that the Comma Johanneum was probably forged and De revolutionibus orbium coelestium, a treatise by Nicolaus Copernicus arguing for a heliocentric orbit of the earth, both works that at the time contradicted the Church's official stance on particular issues.

The final (20th) edition appeared in 1948, and it was formally abolished on 14 June 1966 by Pope Paul VI.[7][8] However, the moral obligation of the Index was not abolished, according to the Congregation for the Doctrine of the Faith.[9] Furthermore, the 1983 Code of Canon Law states that bishops have the duty and right to review material concerning faith or morals before it may be published.[10]

Some recent examples of Christian bans:

Although nothing in the Qur'an explicitly imposes censorship, similar methodology has been carried out under Islamic theocracies, such as the fatwa (religious judgment) against The Satanic Verses (a novel), ordering that the author be executed for blasphemy.

Some Islamic societies have religious police, who seize banned consumer products and media regarded as un-Islamic, such as CDs/DVDs of various Western musical groups, television shows and film.[12] In Saudi Arabia, religious police actively prevent the practice or proselytizing of non-Islamic religions within Arabia, where they are banned.[12] This included the ban of the film, The Passion of the Christ.

A page from a 15th-century illustrated copy of a book by Al-Bīrūnī, depicting Muhammad at the Farewell Pilgrimage.[13] This image was the subject of a 2008 petition to have it removed from Wikipedia.

Throughout the history of the publishing of Jewish books, various works have been censored or banned. These can be divided into two main categories: Censorship by a non-Jewish government, and self-censorship. Self-censorship could be done either by the author himself, or by the publisher, out of fear from the gentiles or public reaction. Another important distinction that has to be made is between the censorship which existed already on manuscripts, before the printing press was invented, and the more official censorship after the printing press was invented.

Many of the "official" Christian government censors of Jewish books were Jewish apostates. The main reason for this was due to their knowledge of Hebrew, especially Rabbinic Hebrew.

In Czarist Russia in the nineteenth century, it was decreed that Jewish books could only be published in two cities, Vilnius and Zhitomir.

The Mishnah (Sanhedrin 10:1) prohibits the reading of extra-biblical books (ספרים חיצונים). The Talmud explains this to mean the book of Ben Sirah (Sirach). In the early thirteenth century the philosophical book The Guide for the Perplexed by Maimonides was prohibited to be read until one was older by some French and Spanish Jewish leaders, because of the perceived danger of philosophy. Philosophy was prohibited to be learned until the age of forty. The same restriction was later applied to Kabbalah, in the fifteenth century. In the 1720s, the kabbalistic works of Rabbi Moshe Chaim Luzzato were banned by religious leaders. In the 1690s, the book Pri Chadash was banned in Egypt for arguing on earlier authorities.[14]

In the modern era, when government censorship of Jewish books is uncommon, books are mainly self-censored, or banned by Orthodox Jewish religious authorities. Marc Shapiro points out that not all books considered heretical by Orthodox Jews are banned; only those books on which there is a risk that Orthodox Jews may read them are banned.[15] Some examples: 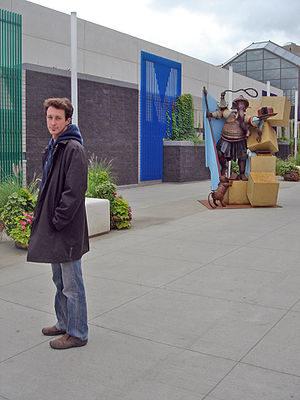 Ryan McCourt, pictured with his sculpture "Destroyer of Obstacles," in front of the Shaw Conference Centre in Edmonton, August 2007, a month before the work was ordered removed by Mayor Stephen Mandel.

In 2006, Ryan McCourt was the first artist selected to display sculpture for one year outside Edmonton's Shaw Conference Centre.[19] McCourt's exhibition, "Will and Representation," was an installation of four large sculptures based on Ganesha,[20] a deity from Hindu mythology. Ten months into the exhibition, then-Mayor of Edmonton Stephen Mandel ordered the works removed after reportedly receiving a 700-name petition complaining of the sculptures' "disrespectful" nudity.[21][22][23][24][25][26][27][28] When asked for comment, McCourt stated that "Nudity seems like a rather quaint thing to get one's knickers in a bunch over, in the 21st century. Besides, there's lots of art that I don't like, I don't go around gathering signatures of people who agree with me, and try to force the art to come down. That would be truly offensive, especially in a democracy like Canada."[29]

Broadly, the public reaction to Mandel's censorship decree was one of disapproval.[30][31][32][33][34] In an interview with the Edmonton Journal's Paula Simons, David Goa, religious scholar, cultural anthropologist, and director of the University of Alberta's Chester Ronning Centre for the Study of Religion and Public Life, states "In India, Lord Ganesha is on everything -- playing cards, advertising signs, lotto tickets, even diapers, I suspect." Within the traditional Thirty-two forms of Ganesha in Hinduism, Ganesha is sometimes presented nude, in both infant (Bala Ganapati) and erotic (Uchchhishta Ganapati) forms. Simons concludes, "In his haste to appease a few protesters, the mayor, usually a champion of the arts, made a serious error in judgment. Instead of giving McCourt's divinely inspired statues the bum's rush, we should be celebrating this Canadian cross-pollination of cultures and aesthetic forms".[27] The Globe and Mail's columnist Margaret Wente agreed with Simons: "The mayor, of course, was quite wrong. Mr. McCourt's sculptures did not insult the Hindu community. They insulted a small but vocal conservative religious group that is about as representative of Hindus as Hassidic Jews are of Jews.... There's a big difference between respecting different cultures and caving in to illiberalism and superstition." [35]

Despite such negative responses in the media to visual art censorship in Canada, in 2014 the Edmonton Arts Council subsequently refused a donation of one of McCourt's sculptures, "Destroyer of Obstacles," evidently because the sculpture had genitalia beneath its clothes.[36] After meeting with seven Hindu community group representative to seek out their opinion of the donation, the Edmonton Arts Council received a response that McCourt's sculpture was "an offense to their religion" and that the ban enacted by Mayor Mandel should remain in place.[37] As a result of this consultation, "the Public Art Committee unanimously voted to decline acceptance of the gift, as the artwork did not meet "community or civic suitability" criteria." In McCourt's view, “It is not the purpose of a city’s public art collection to placate special interests,” he says. “I want Edmonton to build the best civic art collection that we can get, never mind the politics, the religion, etc. of the artists making the work.”[38]