From Infogalactic: the planetary knowledge core
Jump to: navigation, search
For related topics, see Ecstasy (emotion) and Ecstasy (philosophy).
File:S.-Caterina-Cavallino.jpg
Saint Caterina of Alexandria during her ecstasy by Bernardo Cavallino.

Religious ecstasy is a type of altered state of consciousness characterized by greatly reduced external awareness and expanded interior mental and spiritual awareness, frequently accompanied by visions and emotional (and sometimes physical) euphoria.

Although the experience is usually brief in time,[1] there are records of such experiences lasting several days or even more, and of recurring experiences of ecstasy during one's lifetime.

A person's sense of time and space disappear during a religious ecstasy forsaking any senses or physical cognizance in its duration. Among venerated Catholic saints who dabble in Christian mysticism, a person's physical stature, human sensory, or perception is completely detached from time and space during an ecstatic experience. 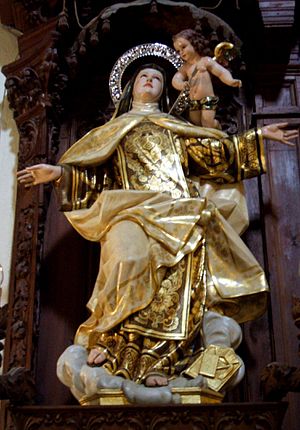 The religious ecstasy of Saint Teresa of Avila of the Carmelite Order, here portrayed being pierced a thousand times in the heart by a Putto.

The adjective "religious" means that the experience occurs in connection with religious activities or is interpreted in context of a religion. Marghanita Laski writes in her study "Ecstasy in Religious and Secular Experiences," first published in 1961:

"Epithets are very often applied to mystical experiences including ecstasies without, apparently, any clear idea about the distinctions that are being made. Thus we find experiences given such names as nature, religious, aesthetic, neo-platonic, sexual etc. experiences, where in some cases the name seems to derive from trigger, sometimes from the overbelief, sometimes from the known standing and beliefs of the mystic, and sometimes, though rarely, from the nature of the experience.

Ecstasies enjoyed by accepted religious mystics are usually called religious experiences no matter what the nature of the ecstasy or the trigger inducing it."[2] 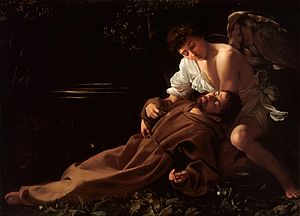 Saint Francis of Assisi in Ecstasy. Caravaggio, oil on panel.

Religious people may hold the view that true religious ecstasy occurs only in their religious context (e.g. as a gift from the supernatural being whom they follow) and it cannot be induced by natural means (human activities). Trance-like states which are often interpreted as religious ecstasy have been deliberately induced with techniques or ecstatic practices; including, prayer, religious rituals, meditation, breathing exercises, physical exercise, sex, music, dancing, sweating, fasting, thirsting, and psychotropic drugs. An ecstatic experience may take place in occasion of contact with something or somebody perceived as extremely beautiful or holy. It may also happen without any known reason. The particular technique that an individual uses to induce ecstasy is usually one that is associated with that individual's particular religious and cultural traditions. As a result, an ecstatic experience is usually interpreted within the particular individual religious context and cultural traditions. These interpretations often include statements about contact with supernatural or spiritual beings, about receiving new information as a revelation, also religion-related explanations of subsequent change of values, attitudes and behavior (e.g. in case of religious conversion).

Achieving ecstatic trances is a shamanic activity, inducing ecstasy for such purposes as traveling to heaven or the underworld, guiding or otherwise interacting with spirits, clairvoyance, and healing. Some shamans take drugs from such plants as Ayahuasca, peyote and cannabis (drug) or certain mushrooms in their attempts to reach ecstasy, while others rely on such non-chemical means as ritual, music, dance, ascetic practices, or visual designs as aids to mental discipline.

Athletes may follow rituals in preparing for contests, which are dismissed as superstition, but this sports psychology device may help them to attain advantage in an ecstasy-like state[citation needed].

Yoga provides techniques to attain an ecstasy state called samādhi. According to practitioners, there are various stages of ecstasy, the highest being Nirvikalpa Samadhi. Bhakti Yoga especially, places emphasis on ecstasy as being one of the fruits of its practice.

In Buddhism, especially in the Pali Canon, there are eight states of trance also called absorption. The first four states are Rupa or, materially-oriented. The next four are Arupa or non-material. These eight states are preliminary trances which lead up to final saturation. In Visuddhimagga, great effort and years of sustained meditation are practiced to reach the first absorption, and that not all individuals are able to accomplish it at all.

Modern meditator experiences in the Thai Forest Tradition, as well as other Theravadin traditions, demonstrates that this effort and rarity is necessary only to become completely immersed in the absorptions and experience no other sensations. It is possible to experience the absorptions in a less intense state with much less practice.

In the Dionysian Mysteries, initiates used intoxicants and other trance-inducing techniques (like dance and music) to remove inhibitions and social constraints, liberating the individual to return to a natural state.

In the monotheistic tradition, ecstasy is usually associated with communion and oneness with God. However, such experiences can also be personal mystical experiences with no significance to anyone but the person experiencing them. Some charismatic Christians practice ecstatic states (such as "being slain in the Spirit") and interpret these as given by the Holy Spirit. The firewalkers of Greece dance themselves into a state of ecstasy at the annual Anastenaria, when they believe themselves under the influence of Saint Constantine.[3] [4][5]

Historically, large groups of individuals have experienced religious ecstasies during periods of Christian revivals, to the point of causing controversy as to the origin and nature of these experiences.[6][7] In response to claims that all emotional expressions of religious ecstasy were attacks on order and theological soundness from the Devil, Jonathan Edwards published his now-famous and influential Treatise on Religious Affections. Here, he argues, religious ecstasy could come from oneself, the Devil, or God, and it was only by observing the fruit, or changes in inner thought and behaviour, that one could determine if the religious ecstasy had come from God.[8]

In modern Pentecostal, charismatic and spirit-filled Christianity, numerous examples of religious ecstasy have transpired, similar to historic revivals. These occurrences however, have changed significantly since the time of the Toronto Blessing phenomena and several other North American so-called revivals and outpourings from the mid 1990s. From that time, religious ecstasy in these movements has been characterized by increasingly bizarre behaviors that are understood by adherents to be the anointing of the holy spirit and evidence of God 'doing a new work'. One of the most controversial and strange examples is that of spiritual birthing [9] - a highly bizarre practice during which women, and at times even men, claim to be having actual contractions of the womb while they moan and retch as though experiencing childbirth.[10] It is said to be a prophetic action bringing spiritual blessings from God into the world. Many believe spiritual birthing to be highly demonic in nature and more occult-like than Christian. Religious ecstasy in these Christian movements has also been witnessed in the form of squealing, shrieking, an inability to stand or sit, uttering apocalyptic prophecies, holy laughter, crying and barking. Some people have made dramatic claims of sighting 'gold dust', 'angel feathers', 'holy clouds', or the spontaneous appearance of precious gem stones during ecstatic worship events.[11] Others have claimed to have received spontaneous gold tooth fillings. The Range Christian Fellowship in the conservative Australian city of Toowoomba demonstrates such displays of religious ecstasy on an almost weekly basis.[12] In addition to all of the above, worshippers there also use textile banners and during moments of religious ecstasy believe these banners carry special powers of 'anointing' as a result of divinely inspired artwork.[13] Adherents in this church, who are caught up in such religious ecstasy are free to put forward virtually any statement as a 'revelation', 'word from the Lord', or prophecy without being challenged and bible verses are used in a highly selective manner, at times out of context, to justify these statements. This in turn, provides great scope for those who deem themselves as being 'in the river' to exercise a form of spiritual elitism that becomes quite cultish in practice.[14]

In hagiography (writings about Christian saints) many instances are recorded in which saints are granted ecstasies. According to the Catholic Encyclopedia[15] religious ecstasy (called "supernatural ecstasy") includes two elements: one, interior and invisible, in which the mind rivets its attention on a religious subject, and another, corporeal and visible, in which the activity of the senses is suspended, reducing the effect of external sensations upon the subject and rendering him or her resistant to awakening. The witnesses of a Marian apparition often describe experiencing these elements of ecstasy.

Modern Witchcraft traditions may define themselves as "ecstatic traditions," and focus on reaching ecstatic states in their rituals. The Reclaiming Tradition and the Feri Tradition are two modern ecstatic Witchcraft examples.[16][17]

As described by the Indian spiritual teacher Meher Baba, God-intoxicated souls known as masts experience a unique type of spiritual ecstasy: "[M]asts are desperately in love with God – or consumed by their love for God. Masts do not suffer from what may be called a disease. They are in a state of mental disorder because their minds are overcome by such intense spiritual energies that are far too much for them, forcing them to lose contact with the world, shed normal human habits and customs, and civilized society and live in a state of spiritual splendor but physical squalor. They are overcome by an agonizing love for God and are drowned in their ecstasy. Only the divine love embodied in a Perfect Master can reach them."[18]