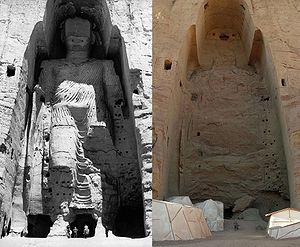 A statue of the Buddha at Bamiyan before and after its March 2001 destruction by Taliban forces.

The mere statement on the part of a religion that its own beliefs and practices are correct and any contrary beliefs are incorrect does not in itself constitute intolerance (i.e., ideological intolerance).

According to the 19th century British historian Arnold Toynbee, for a religious establishment to persecute another religion for being "wrong" ironically puts the persecuting religion in the wrong, undermining its own legitimacy.[1]

Other states, whilst not containing constitutional provisions directly related to religion, nonetheless contain provisions forbidding discrimination on religious grounds (see, for example, Article 1 of the French Constitution, article 15 of the Canadian Charter of Rights and Freedoms and article 40 of the Constitution of Egypt). These constitutional provisions do not necessarily guarantee that all elements of the state remain free from religious intolerance at all times, and practice can vary widely from country to country.

Other countries, meanwhile, may allow for religious preference, for instance through the establishment of one or more state religions, but not for religious intolerance. Finland, for example, has the Evangelical Lutheran Church of Finland and Finnish Orthodox Church as its official state religions, yet upholds the right of free expression of religion in article 11 of its constitution.

Some countries retain laws forbidding defamation of religious belief. Some retain laws forbidding all forms of blasphemy (e.g., Germany where, in 2006, Manfred van H. was convicted of blasphemy against Islam). This is seen by some as official endorsement of religious intolerance, amounting to the criminalization of religious views. The connection between intolerance and blasphemy laws is closest when the laws apply to only one religion. In Pakistan blasphemy directed against either the tenets of the Qur'an or the Prophet Mohammed is punishable by either life imprisonment or death. Apostasy, the rejection of one's old religion, is also criminalized in a number of countries, notably Afghanistan with Abdul Rahman being the first to face the death penalty for converting to Christianity.

The United Nations upholds the right to free expression of religious belief in articles and 18 and 19 of the Universal Declaration of Human Rights while article 2 forbids discrimination on the basis of religion. Article 18 also allows for the freedom to change religion. The Declaration is not legally binding, however the United States chose in 1998 to pass the International Religious Freedom Act, creating the Commission on International Religious Freedom, and mandating that the United States government take action against any country found to violate the religious freedoms outlined in the Universal Declaration of Human Rights.[4] The European Convention on Human Rights, which is legally binding on all European Union states (following the passage of the Human Rights Act 1998 in the United Kingdom), makes restricting the rights of an individual to practice or change their religion illegal in article 9, and discrimination on the basis of religion illegal in article 14.

Within those countries that openly advocate religious tolerance there remain debates as to the limits of tolerance. Some individuals and religious groups, for example, retain beliefs or practices which involve acts contrary to established law, such as the use of cannabis by members of the Rastafari movement, the religious use of eagle feathers by non-Native Americans (contrary to the eagle feather law, 50 CFR 22), or the practice of polygamy amongst the LDS Church in the 19th century.[6]

The precise definition of "religion", and to which groups it applies, can also cause controversy, for example the case of Scientologists who have all rights of religious freedom in the U.S. but complain that the highest court decided not to grant the status of a Non-profit organization in several U.S. states. Attempts to legislate against acts of religious intolerance amongst citizens frequently come up against issues regarding the freedom of speech; whilst in France being convicted of incitement to religious hatred can carry a maximum of 18 months in prison. An attempt to pass a similar law by Tony Blair's Labour government in the United Kingdom had to be dropped in April, 2006 after criticism that it restricted free speech. In Victoria, Australia the Racial and Religious Tolerance Act 2001 makes illegal "conduct that incites hatred against, serious contempt for, or revulsion or severe ridicule of, that other person or class of persons" on the grounds of religious belief.[citation needed]