From Infogalactic: the planetary knowledge core
Jump to: navigation, search
This article is about the emotion. For the episode of the TV series House, see Remorse (House). 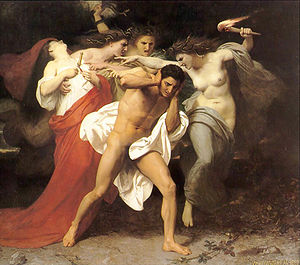 The Remorse of Orestes (1862), by William-Adolphe Bouguereau

Remorse is an emotional expression of personal regret felt by a person after they have committed an act which they deem to be shameful, hurtful, or violent. Remorse is closely allied to guilt and self-directed resentment. When a person regrets an earlier action or failure to act, it may be because of remorse or in response to various other consequences, including being punished for the act or omission. In a legal context, the perceived remorse of an offender is assessed by Western justice systems during trials, sentencing, parole hearings, and in restorative justice. However, it has been pointed out that epistemological problems arise in assessing an offender's level of remorse.[1]

A person who is incapable of feeling remorse is often labelled with antisocial personality disorder - as characterized in the DSM IV-TR. In general, a person needs to be unable to feel fear, as well as remorse, in order to develop psychopathic traits. Legal and business professions such as insurance have done research on the expression of remorse via apologies, primarily because of the potential litigation and financial implications.

Two studies on apologising are "The Five Languages of Apology" by Gary Chapman and Jennifer Thomas[2] and "On Apology" by Aaron Lazare.[3] These studies indicate that effective apologies that express remorse typically include a detailed account of the offense; acknowledgment of the hurt or damage done; acceptance of the responsibility for, and ownership of, the act or omission; an explanation that recognises one's role. As well, apologies usually include a statement or expression of regret, humility or remorse; a request for forgiveness; and an expression of a credible commitment to change or a promise that it will not happen again. Apologies may also include some form of restitution, compensation or token gesture in line with the damage that you caused. John Kleefeld has encapsulated this into "four Rs" that typically make for a fully effective apology: remorse, responsibility, resolution and reparation.[4] When an apology is delayed, for instance if a friend has been wronged and the offending party does not apologise, the perception of the offense can compound over time. This is sometimes known as compounding remorse. Compunction refers to the act of actively expressing remorse, usually requiring the remorseful individual to physically approach the person to whom they are expressing regret.

In a study led by Leanne ten Brinke, a professor at the University of British Columbia, participants' genuine and falsified emotions were studied to investigate behavioral and facial cues. Brinke and others found a significant difference in the presence of facial expressions in real and false remorse. With falsified emotions of remorse, they found that the participants experienced a greater range of emotions, which are close to genuine feelings, while deceptive descriptions of remorse were associated with positive emotions, such as happiness and surprise.[5] The positive emotions felt by participants demonstrating a deceptive description of remorse are likely due to the leakage of genuine feelings from incomplete deception. Brinke and others established that participants appeared surprised because they could only raise their eyebrows when trying to appear sad, which then caused the participants to feel embarrassed, feel genuine happiness, and let a smile slip.[5] In contrast to deceptive and falsified accounts, genuine accounts were expressed with fewer emotions. Participants showing deceptive or falsified emotions overcompensated their emotional performance. Genuine negative feelings of remorse leaked by the lower face were immediately covered up with a neutral expression. Brinke recorded a small number of body language and verbal cues for deceptive participants; instead, she recorded a large number of speech hesitations that cued deceptive and falsified accounts of remorse.[5] Current findings about deceptive and falsified remorse have practical use for measuring veracity of remorseful displays for judges, jurors, parole officers, and psychologists when sentencing offenders.

Psychopathic individuals are best known for their flagrant disregard for social and moral norms. Psychopaths have dysfunctional personal relationships, characterized by violence, exploitation, and philandering. Emotionally, they are incapable of feeling guilt or empathy, they respond abnormally to fear and pain, and other emotions are shallow compared to population norms.[6] Psychopaths refuse to adopt social and moral norms because they are not swayed by the emotions, such as guilt, remorse, or fear of retribution, that influence other human beings.[6]

As human beings, we hold dear to the value of remorse. The lack of remorse leads us to all believe a person to be despicable. It is widely accepted that remorse is the proper reaction to any misconduct. Remorse may originate in from either actual or contrived regret for the misconduct that results in getting caught or causing harm.[7] Research has shown that the facial expressions of offenders on trial affect the jury's attitude and, in turn, the sentencing decision. While remorse may present guilt that may influence a jury's decision, a lack of remorse influences the jury even more because it is one trait of psychopathy.

Psychopathy represents a configuration of traits that are missing within a person's personality, such as a lack of empathy and remorse. Knowledge of psychopathic traits has been shown to affect how jurors perceive adult and juvenile offenders. Assessments of psychopathy are introduced to direct a relatively wide variety of questions in the legal system, so investigators have started examining the effects of psychopathy evidences.[8] Through simulations in studies by John Edens, who is a psychology professor at Texas A&M University, data suggests that attributing psychopathic traits to adult and juvenile offenders can have a noticeable negative effect on how these individuals are viewed by others.[8] Remorselessness, a key feature of psychopathy, proves to be a strong predictor of juror attitudes.[8] In the study by John Edens, a pool of offenders were labeled as either having a "disorder" condition or having "no disorder." Those labeled as "disorder" were given death verdicts by mock jurors.[8] In the study, traits, such as callousness, remorselessness, and superficial charm, were a strong predictor of negative consequences for the offenders. This study found that remorselessness has the largest effect on the mock jurors' opinions of the "disorder" offenders and it explains support for the death sentence.[8] The results of this study suggest that, free of mental health testimonies, perceptions of a defendant's personality traits may have serious implications in the sentencing decisions of a capital case.[8]

The perception of remorse is essential to an apology, as such the greater the perception of remorse the more effective the apology. An effective apology reduces negative consequences and facilitating cognitive and behavioral changes associated with forgiveness.[9] With empathy as the mediator between apologies and forgiveness and remorse as the essential part to an apology, one can expect empathy to mediate perceived remorse forgiveness. Remorse may signal that one is suffering psychologically because of their negative behavior, which leads to empathy from the second party who then will express forgiveness.[9] In a study by James Davis and Greg Gold, 170 university students filled out questionnaires about forgiveness within interpersonal relationships. Davis and Greg's findings suggest that when a victim perceives an apology to be remorseful then he/she believes the negative behavior will not occur again, increased empathy results in increased forgiveness, and future offenses could be easily forgiven.[9]

Remorse is closely linked with the willingness to humble oneself and to repent for one's misdeeds. Remorse is not as such when defined through the view of self-condemnation.[10] Self-condemnation, more so than remorse, is said to be associated with poor psychological well-being. Remorse captures feelings of guilt, regret, and sorrow. Forgiveness does not eliminate all negative feelings, but it may entail the reduction of bitter and angry feelings, not feelings of disappointment, regret, or sorrow. A study by Mickie Fisher found that people who forgive themselves for serious offenses may continue to harbor remorse or regret.[10] In contrast to remorse, self-condemnation reflects a more global, negative, severe stance toward oneself. Remorse may convey a sense of sorrow, while self-condemnation suggests the kind of loathing and desire for punishment that characterizes interpersonal grudges. Fisher suggests that self-forgiveness does not necessarily require one to get rid of feelings or regret or remorse.[10] Based on the study by Fisher, self-forgiveness seems to relate more closely to self-condemnation and not remorse. When trying to convince people to forgive themselves, it is crucial not to erase the potentially adaptive feelings of remorse along with the more destructive self-condemnation.[10] People can grow and experience prosocial behaviors once they accept responsibility for their own transgressions. For genuine self-forgiveness, one must first accept responsibility for their offenses and not rush to rid themselves of guilty feelings.

Purchases can be divided into two different categories: material or experiential. A material good is made to be kept in the buyer's possession, while an experiential good provides the buyer with a life experience. A material good provides the buyer with a more enduring pleasure compared with an experiential, as these two purchases also result in different types of regret.[11] While experiential purchases bring about regrets of a missed opportunity, material purchases result in buyer's remorse, which means that a person dwells on how their material purchase measure up to other purchases they could have made and how it compares with other people's purchases. These comparisons diminish satisfaction from the original purpose.[11] Past research explains that regrets of action are intense, but only in the short term, while regrets of inaction gains intensity over time and dominates people's experience. Major life choices, such as marriage, jobs, and education, are often the focus of regret. Everyday experience suggests that everyday decisions are the most frequent causes of regret.[11] Marketing directors know the effects of buyer's remorse, and use it to their advantage when planning marketing strategies. The regret felt over choosing a material over an experiential purchase depends on the pain of the factors underlying the purchase. Based on research by Thomas Gilovich and Emily Rosenzwig, material purchases are more likely to lead to regret, while experiential purchases give the buyer more satisfaction even over time.[11]