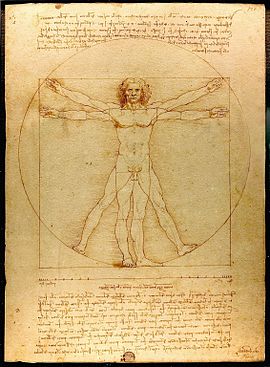 Leonardo da Vinci's Vitruvian Man (c. 1490) shows the correlations of ideal human proportions with geometry described by the ancient Roman architect Vitruvius in his De Architectura. Vitruvius described the human figure as being the principal source of proportion among the Classical orders of architecture.

Humanism is the study of classical antiquity, at first in Italy and then spreading across Western Europe in the 14th, 15th, and 16th centuries. The terms for this movement Renaissance (rinascimento "rebirth") and "humanist" (whence modern humanism; also Renaissance humanism to distinguish it from later developments grouped as humanism) are contemporary to that period.[1]

Renaissance humanism was a response to the utilitarian approach and what came to be depicted as the "narrow pedantry" associated with medieval scholasticism.[2] Humanists sought to create a citizenry able to speak and write with eloquence and clarity and thus capable of engaging in the civic life of their communities and persuading others to virtuous and prudent actions. This was to be accomplished through the study of the studia humanitatis, today known as the humanities: grammar, rhetoric, history, poetry, and moral philosophy.

According to one scholar of the movement,

Early Italian humanism, which in many respects continued the grammatical and rhetorical traditions of the Middle Ages, not merely provided the old Trivium with a new and more ambitious name (Studia humanitatis), but also increased its actual scope, content and significance in the curriculum of the schools and universities and in its own extensive literary production. The studia humanitatis excluded logic, but they added to the traditional grammar and rhetoric not only history, Greek, and moral philosophy, but also made poetry, once a sequel of grammar and rhetoric, the most important member of the whole group.[3]

Humanism was a pervasive cultural mode and not the program of a small elite, a program to revive the cultural legacy, literary legacy, and moral philosophy of classical antiquity. There were important centres of humanism in Florence, Naples, Rome, Venice, Genoa, Mantua, Ferrara, and Urbino.

Some of the first humanists were great collectors of antique manuscripts, including Petrarch, Coluccio Salutati, and Poggio Bracciolini. Of the three, Petrarch was dubbed the "Father of Humanism" because of his devotion to Greek and Roman scrolls. Many worked for the organized Church and were in holy orders (like Petrarch), while others were lawyers and chancellors of Italian cities (such as Petrarch's disciple Salutati, the Chancellor of Florence) and thus had access to book copying workshops.

In Italy, the humanist educational program won rapid acceptance and, by the mid-fifteenth century, many of the upper classes had received humanist educations. Some of the highest officials of the Church were humanists with the resources to amass important libraries. Such was Cardinal Basilios Bessarion, a convert to the Latin Church from Greek Orthodoxy, who was considered for the papacy and was one of the most learned scholars of his time. There were several fifteenth-century and early sixteenth-century humanist Popes[4] one of whom, Aeneas Silvius Piccolomini (Pius II), was a prolific author and wrote a treatise on "The Education of Boys".[5] These subjects came to be known as the humanities, and the movement which they inspired is shown as humanism.

Italian Humanism spread northward to France, Germany, the Low Countries, and England with the adoption of large-scale printing after the end of the era of incunabula (or books printed prior to 1501), and it became associated with the Protestant Reformation. In France, pre-eminent Humanist Guillaume Budé (1467–1540) applied the philological methods of Italian Humanism to the study of antique coinage and to legal history, composing a detailed commentary on Justinian's Code. Budé was a royal absolutist (and not a republican like the early Italian umanisti) who was active in civic life, serving as a diplomat for François I and helping to found the Collège des Lecteurs Royaux (later the Collège de France). Meanwhile, Marguerite de Navarre, the sister of François I, was a poet, novelist, and religious mystic[6] who gathered around her and protected a circle of vernacular poets and writers, including Clément Marot, Pierre de Ronsard, and François Rabelais.

Paganism and Christianity in the Renaissance

Many humanists were churchmen, most notably Pope Pius II (Aeneas Silvius Piccolomini), Sixtus IV, and Leo X,[7][8] and there was often patronage of humanists by senior church figures.[9] Much humanist effort went into improving the understanding and translations of Biblical and early Christian texts, both before and after the Protestant Reformation, which was greatly influenced by the work of figures such as Erasmus and Jacques Lefèvre d'Étaples.

The Cambridge Dictionary of Philosophy describes the rationalism of ancient writings as having tremendous impact on Renaissance scholars:

Here, one felt no weight of the supernatural pressing on the human mind, demanding homage and allegiance. Humanity—with all its distinct capabilities, talents, worries, problems, possibilities—was the center of interest. It has been said that medieval thinkers philosophized on their knees, but, bolstered by the new studies, they dared to stand up and to rise to full stature.[10]

In 1417, for example, Poggio Bracciolini discovered the manuscript of Lucretius, De rerum natura, which had been lost for centuries and which contained an explanation of Epicurean doctrine, though at the time this was not commented on much by Renaissance scholars, who confined themselves to remarks about Lucretius's grammar and syntax.[11] Lorenzo Valla, however, puts a defense of epicureanism in the mouth of one of the interlocutors of one of his dialogues.[12] Valla's defense (or adaptation) of Epicureanism was later taken up in The Epicurean by Erasmus, the "prince of humanists:"

If people who live agreeably are Epicureans, none are more truly Epicurean than the righteous and godly. And if it is names that bother us, no one better deserves the name of Epicurean than the revered founder and head of the Christian philosophy Christ, for in Greek epikouros means "helper." He alone, when the law of Nature was all but blotted out by sins, when the law of Moses incited to lists rather than cured them, when Satan ruled in the world unchallenged, brought timely aid to perishing humanity. Completely mistaken, therefore, are those who talk in their foolish fashion about Christ's having been sad and gloomy in character and calling upon us to follow a dismal mode of life. On the contrary, he alone shows the most enjoyable life of all and the one most full of true pleasure. (Erasmus 549)

This passage exemplifies the way in which the humanists saw pagan classical works, such as the philosophy of Epicurus, as being in harmony with Christianity when properly interpreted.

Renaissance Neo-Platonists such as Marsilio Ficino (whose translations of Plato were still used into the nineteenth century) attempted to reconcile Platonism with Christianity, according to the suggestions of early Church fathers Lactantius and Saint Augustine. In this spirit, Pico della Mirandola attempted to construct a syncretism of all religions (he was not a humanist[clarification needed] but an Aristotelian trained in Paris), but his work did not win favor with Church authorities.

Historian Steven Kreis expresses a widespread view (derived from the nineteenth-century Swiss historian Jacob Burckhardt), when he writes that:

The period from the fourteenth century to the seventeenth worked in favor of the general emancipation of the individual. The city-states of northern Italy had come into contact with the diverse customs of the East, and gradually permitted expression in matters of taste and dress. The writings of Dante, and particularly the doctrines of Petrarch and humanists like Machiavelli, emphasized the virtues of intellectual freedom and individual expression. In the essays of Montaigne the individualistic view of life received perhaps the most persuasive and eloquent statement in the history of literature and philosophy.[13]

Two noteworthy trends in Renaissance humanism were Renaissance Neo-Platonism and Hermeticism, which through the works of figures like Nicholas of Kues, Giordano Bruno, Cornelius Agrippa, Campanella and Pico della Mirandola sometimes came close to constituting a new religion itself. Of these two, Hermeticism has had great continuing influence in Western thought, while the former mostly dissipated as an intellectual trend, leading to movements in Western esotericism such as Theosophy and New Age thinking.[14] The "Yates thesis" of Frances Yates holds that before falling out of favour, esoteric Renaissance thought introduced several concepts that were useful for the development of scientific method, though this remains a matter of controversy.

Though humanists continued to use their scholarship in the service of the church into the middle of the sixteenth century and beyond, the sharply confrontational religious atmosphere following the Protestant reformation resulted in the Counter-Reformation that sought to silence challenges to Catholic theology,[15] with similar efforts among the Protestant churches. However, a number of humanists joined the Reformation movement and took over leadership functions, for example, Philipp Melanchthon, Ulrich Zwingli, John Calvin, and William Tyndale.

With the Counter Reformation initiated by the Council of Trent, positions hardened and a strict Catholic orthodoxy based on Scholastic philosophy was imposed, and some humanists, even moderate Catholics such as Erasmus, risked being declared heretics for their criticism of the church.[16]

The historian of the Renaissance Sir John Hale cautions against too direct a linkage between Renaissance humanism and modern uses of the term: "Renaissance humanism must be kept free from any hint of either "humanitarianism" or "humanism" in its modern sense of rational, non-religious approach to life ... the word "humanism" will mislead ... if it is seen in opposition to a Christianity its students in the main wished to supplement, not contradict, through their patient excavation of the sources of ancient God-inspired wisdom"[17]