From Infogalactic: the planetary knowledge core
Jump to: navigation, search
For the city of the same name, see Rensselaer, New York.

Rensselaer County (/rɛnsəˈlɪər/) is a county in the U.S. state of New York. As of the 2010 census, the population was 159,429.[1] Its county seat is Troy.[2] The county is named in honor of the family of Kiliaen van Rensselaer, the original Dutch owner of the land in the area. 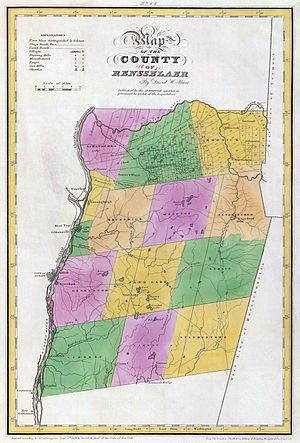 Map of Rensselaer County in 1829

The area that is now Rensselaer County was inhabited by the Algonquian-speaking Mohican Indian tribe at the time of European encounter. Kiliaen van Rensselaer, a Dutch jeweler and merchant, purchased the area in 1630 and incorporated it in his patroonship Rensselaerswyck. (It was part of the Dutch colony New Netherland).[3]

The land passed into English rule in 1664; the Dutch regained control in 1673, but the English took it back in 1674. Until 1776, the year of American independence, the county was under English or British control.[4] The county was not organized as a legal entity until after the Revolution in 1791, when it was created from an area that was originally part of the very large Albany County.

In 1807, in a county re-organization, the rural sections of Troy were set off as Towns, and the city was incorporated. The two towns created were Brunswick and Grafton, both named after British dukes, (the of Brunswick and Grafton). A third town, Philipstown, was set off in 1806. In 1808 it was renamed Nassau after the duke of that area. 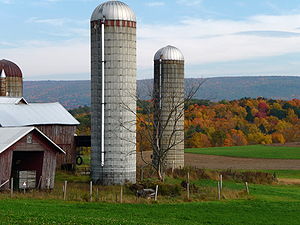 A farm in Brunswick

The terrain runs from level and flat near the Hudson and then rises into the Rensselaer Plateau around Poestenkill and Sand Lake, then to the Taconic Mountains along the Massachusetts state line.

The highest point is Berlin Mountain, 2,818 feet (859 m) above sea level, in the town of Berlin. The lowest point is sea level at the Hudson.

The Hoosic River, a tributary of the Hudson River, is in the north part of the county.

File:RensselaerCountyOfficeBuilding.jpg
Rensselaer County Office building, which houses county offices, including that of the County Executive 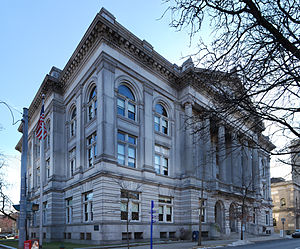 Beginning in 1791, Rensselaer County was governed by a Board of Supervisors, which acted as the Legislature, with the chairman of the board serving as a de facto Executive.

In 1970, the Rensselaer County Legislature was created, which elected Edward J. "Ned" Quinn as Chairman. The Chairman served as the equivalent to an executive until the office of County Executive was created in 1972. Since its creation, Democrats have never won the office, although they controlled the Legislature until 1994. One notable candidate for Executive was Edward Pattison who was later elected to Congress, and whose son Mark served two terms as Mayor of Troy. The current county executive is Kathleen M. Jimino. Legislative authority is vested in the County Legislature, which consists of 20 members representing 17 different communities, separated into six districts. The current composition of the Legislature is as follows (11 Republicans, 6 Democrats and 3 Conservatives that caucus with the Republicans): 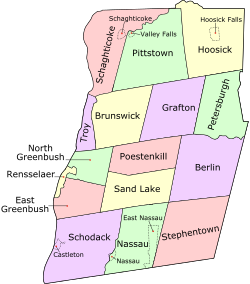 Map of towns, cities and villages within Rensselaer County