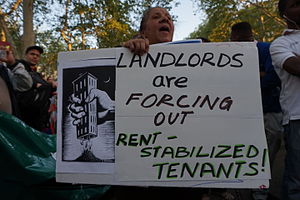 Rent regulation is a system of laws, administered by a court or a public authority, which aim to ensure the quality and affordability of housing and tenancies on the rental market for land. Comprehensive rent regulation is common in Commonwealth and European Union countries, including Canada, Germany, Ireland, Cyprus and Sweden, and also some states in the United States. Generally a system of rent regulation involves:

The classic objective is to limit the price that would result from the market, where an inequality of bargaining power between landlords and tenants produces continually escalating prices without any stable market equilibrium. However, according to survey data, 93% of economists would argue that "a ceiling on rents reduces the quantity and quality of housing available."[1][2]

In Canada there are rent regulation laws in each province. For example, in Ontario the Residential Tenancies Act 2006 requires that prices for rented properties do not rise more than 2.5 percent each year, or a lower figure fixed by a government minister.

German rent regulation is found in the Civil Code (the Bürgerliches Gesetzbuch) in §§ 535 to 580a, and particular rights for tenants on termination are in §§568 ff.[3] Rental price increases are required to follow a "rental mirror" (Mietspiegel), which is a database of local reference rents. This collects all rents for the past four years, and landlords may only increase prices on their property in line with rents in the same locality. Usury rents are prohibited altogether, so that any price rises above 20 per cent over three years are unlawful.[4] Tenants may be evicted against their will through a court procedure for a good reason, and in the normal case only with a minimum of three months' notice.[5] Tenants receive unlimited duration of their rental agreement unless the duration is explicitly halted. In practice, landlords have little incentive to change tenants as rental price increases beyond inflation are constrained. During the period of the tenancy, a person's tenancy may only be terminated for very good reasons. A system of rights for the rental property to be maintained by the landlord is designed to ensure quality of housing. Many states, such as Berlin, have a constitutional right to adequate housing, and require buildings to make dwelling spaces of a certain size and ceiling height.

See also: English land law, Affordability of housing in the United Kingdom, Rent regulation in England and Wales, and Rent control in Scotland

Rent regulation covered the whole of the UK private sector rental market from 1915 to 1980. However, from the Housing Act 1980, it became the Conservative Party's policy to deregulate and dismantle rent regulation. Regulation for all new tenancies was abolished by the Housing Act 1988, leaving the basic regulatory framework was freedom of contract. Rent regulations survive among a small number of council houses, and often the rates set by local authorities mirror escalating prices in the non-regulated private market.

Rent regulation in the United States is an issue for each state. In 1921, the US Supreme Court case of Block v. Hirsh[6] held by a majority that regulation of rents in the District of Columbia was constitutional, but shortly afterwards in 1924 in Chastleton Corp v. Sinclair[7] the same law was struck down by the Supreme Court. After the New Deal, the Supreme Court ceased to interfere with social and economic legislation, and a growing number of states adopted rules[citation needed]. The application was often inconsistent. For example, in New York only some properties continue to have the protection of rent regulation, while others on the private market are left to be priced according to what the market will bear. Fisher v. City of Berkeley, 475 U.S. 260 (1986) held there was no incompatibility with rent control and the Sherman Act.

See also: Freedom of contract and Inequality of bargaining power

"As soon as the land of any country has all become private property, the landlords, like all other men, love to reap where they never sowed, and demand a rent even for its natural produce. The wood of the forest, the grass of the field, and all the natural fruits of the earth, which, when land was in common, cost the labourer only the trouble of gathering them, come, even to him, to have an additional price fixed upon them. He must then pay for the licence to gather them; and must give up to the landlord a portion of what his labour either collects or produces. This portion, or, what comes to the same thing, the price of this portion, constitutes the rent of land ...."

Price controls remain the most controversial element of a system of rent regulation. Historically, economists such as Adam Smith and David Ricardo viewed landlords as producing very little that was valuable, and so regarded "rents" as an exploitative concept. Modern rent controls were intended to protect tenants in privately owned residential properties from excessive rent increases by mandating gradual rent increases, while at the same time ensuring that landlords receive a return on their investment that is deemed fair by the controlling authority (which might, or might not be a legislature). Sometimes called rent leveling or rent stabilization, rent regulation is argued to promote social stability by slowing displacement in booming economic cycles.

It is argued by a number of neo-classical and libertarian economists [8] that some forms of rent control creates shortages and exacerbate scarcity in the housing market by discouraging private investment in the rental market.[9][10] This analysis targeted nominal rent freezes, and the studies conducted were mainly focused on rental prices in Manhattan or elsewhere in the United States. These studies were criticised on the basis that poorer standards in housing conditions were also seen in states which had no rent controls, and so the evidence was inconclusive in demonstrating a causal link.[11]

Evidence based studies, particularly conducted by American economists in the 1990s found that new methods of regulation, allowing for nominal rent increases in defined situations (for instance, linked to inflation or behind wage rises) were "so different, they should be evaluated largely independently of the experience with first-generation rent controls" studied in the 1970s.[12] The view at the time was that "a well-designed rent control can be beneficial".[13]