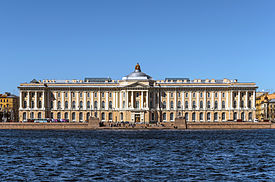 The main building on the Academy Quay

The Russian Academy of Arts in Saint Petersburg, informally known as the Saint Petersburg Academy of Arts, was founded in 1757 by Ivan Shuvalov under the name Academy of the Three Noblest Arts. Catherine the Great renamed it the Imperial Academy of Arts and commissioned a new building, completed 25 years later in 1789 by the Neva River. The academy promoted the neoclassical style and technique, and sent its promising students to European capitals for further study. Training at the academy was virtually required for artists to make successful careers.

Formally abolished in 1918 after the Russian Revolution, the academy was renamed several times. It established free tuition; students from across the country competed fiercely for its few places annually. In 1947 the national institution was moved to Moscow, and much of its art collection was moved to the Hermitage. The building in Leningrad was devoted to the Ilya Repin Leningrad Institute for Painting, Sculpture and Architecture, named in honor of one of Russia's foremost realist artists. Since 1991 it has been called the St. Petersburg Institute for Painting, Sculpture and Architecture.

The academy was located in the Shuvalov Palace on Sadovaya Street. In 1764, Catherine the Great renamed it the Imperial Academy of Arts and commissioned its first rector, Alexander Kokorinov, to design a new building. It took 25 years to complete the Neoclassical edifice, which opened in 1789. Konstantin Thon was responsible for the sumptuous decoration of the interiors. He also designed a quayside in front of the building, with stairs down to the Neva River, and adorned it with two 3000-year-old sphinxes, which were transported from Egypt.

The Inauguration of the Academy of Arts, a painting by Valery Jacobi. 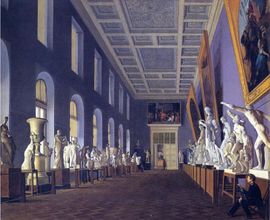 Ivan Betskoy reorganized the academy into a de facto government department; it supervised matters concerning art throughout the country, distributing orders and awarding ranks to artists. The academy vigorously promoted the principles of Neoclassicism by sending the most notable Russian painters abroad, in order to learn the ancient and Renaissance styles of Italy and France. It also had its own sizable collection of choice artworks intended for study and copying.

In the mid-19th-century, the Academism of training staff, much influenced by the doctrines of Dominique Ingres, was challenged by a younger generation of Russian artists who asserted their freedom to paint in a Realistic style. The adherents of this movement became known as peredvizhniki (Itinerants, related to their desire to bring art to the people). Led by Ivan Kramskoi, they publicly broke with the Academy and organized their own exhibitions, which traveled from town to town across Russia. Ilya Repin, Mikhail Vrubel and some other painters still regarded the academy's training as indispensable for the development of basic professional and technical skills.

After the Russian Revolution of 1917, the Imperial Academy passed through a series of transformations. It was formally abolished in 1918 and the Petrograd Free Art Educational Studios (Pegoskhuma) created in its place; this was renamed the Petrograd Svomas (Free Art Studios) in 1919, the Petrograd State Art-Educational Studios of the Reconstructed Academy of Arts in 1921, Vkhutein in 1928, the Institute of Proletarian Fine Arts in 1930, the Russian Academy of Arts in 1933, and the Academy of Arts of the USSR in 1947. After the Academy's move to Moscow that year, the building in what was then called Leningrad was renamed Ilya Repin Leningrad Institute for Painting, Sculpture and Architecture.

The national academy has stayed in Moscow. In 1991 it was renamed the Russian Academy of Arts. The old academy's art collection, which included major works by Poussin, David and Ingres, was removed to the Hermitage Museum across the river.

During the Soviet era, academies were free of tuition fees as they were financed by the government, but admission was intensely competitive. Many would-be students would apply to the Academy for as many as six or seven years in a row without success. With just twenty places available and thousands of applicants, the competition was brutal.

Well-known graduates of Ilya Repin Leningrad Institute for Painting, Sculpture and Architecture in 1930–1950s include:

The Russian Academy of Arts has been headquartered in Moscow since 1947. Its current president is Zurab Tsereteli and its vice-president is Tair Salakhov.

Panorama of the building