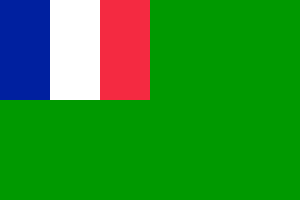 The Republic of Independent Guyana (French: La République de la Guyane indépendante) commonly referred to by the name of the capital Counani (rendered "Cunani" in Portuguese by the Brazilians), was a short-lived independent state in South America.

Counani was created on 23 July 1886 in the area that was disputed by France (as part of French Guiana) and Brazil in the late nineteenth century.[1]

The state was founded by French settlers and existed from 1886 to 1891. The territory of the former state of Counani is now located in the Brazilian state of Amapá.

This "special" State had a constitution, a flag and issued some stamps. It was never recognized by Brazil or France, but the South African Boer Republics opened diplomatic relations with Brezet (who had fought for them previously) during the Boer wars.

Claimants of Head of State