The Republic of Karelia (Russian: Респу́блика Каре́лия, tr. Respublika Kareliya; IPA: [rʲɪˈspublʲɪkə kɐˈrʲelʲɪ(j)ə]; Karelian: Karjalan tazavalda; Finnish: Karjalan tasavalta; Veps: Karjalan Tazovaldkund) is a federal subject of Russia (a republic), located in the northwest of Russia. Its capital is the city of Petrozavodsk. Its population in 2010 was 643,548.[7]

The republic is located in the northwestern part of Russia, taking intervening position between the basins of White and Baltic Seas. The White Sea has a shore line of 630 kilometers (390 mi).

There are about 27,000 rivers in Karelia. Major rivers include: 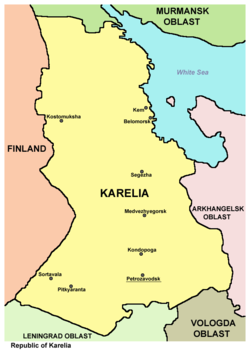 Largest cities of the Republic of Karelia 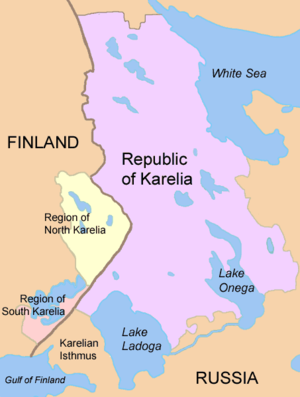 The Regions of North and South Karelia lie in Finland and the Karelian Republic in Russia. The Karelian Isthmus is now part of Leningrad Oblast.

There are 60,000 lakes in Karelia. The republic's lakes and swamps contain about 2,000 km³ of high-quality fresh water. Lake Ladoga (Finnish: Laatokka) and Lake Onega (Ääninen) are the largest lakes in Europe. Other lakes include:

Lakes Ladoga and Onega are located on the south of the republic.

The majority of the republic's territory (148,000 km², or 85%) is composed of state forest stock. The total growing stock of timber resources in the forests of all categories and ages is 807 million m³. The mature and over mature tree stock amounts to 411.8 million m³, of which 375.2 million m³ is coniferous.

Fifty useful minerals are found in Karelia, located in more than 400 deposits and ore bearing layers. Natural resources of the republic include iron ore, diamonds, vanadium, molybdenum, and others.

Main article: Administrative divisions of the Republic of Karelia

Historically, Karelia was a region to the northwest of Russia, east of present-day Finland, controlled by the Novgorod Republic. From the 13th century and onwards, various parts were conquered by Sweden, and incorporated into Swedish Karelia until they were lost to Russia by the Treaty of Nystad in 1721.

In 1920, the province became the Karelian Labour Сommune. In 1923, the province became the Karelian Autonomous Soviet Socialist Republic (Karelian ASSR). From 1940, it was made into the Karelo-Finnish SSR, incorporating the Finnish Democratic Republic which nominally operated in those parts of Finnish Karelia that were occupied by the Soviet Union during the Winter War. Annexed territories were incorporated into Karelo-Finnish SSR, but after the Continuation War the Karelian Isthmus was incorporated into the Leningrad Oblast. Its status was changed back to an ASSR in 1956. During the Continuation War in 1941 Finland occupied large parts of the area but was forced to withdraw in 1944. Though Finland is not currently pursuing any measures to reclaim Karelian lands ceded to Russia, the "Karelian Question" is still a topic present in Finnish politics, but it has never been discussed officially.[citation needed]

The autonomous Republic of Karelia in its present form was formed on November 13, 1991. 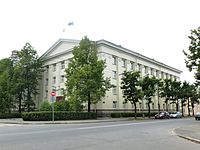 Seat of the Legislative Assembly of Karelia

The parliament of the Republic of Karelia is the Legislative Assembly comprising fifty deputies elected for a four-year term.

The Constitution of the Republic of Karelia was adopted on February 12, 2001. 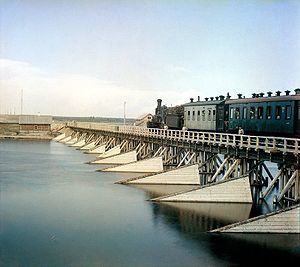 Early 20th-century photo of a bridge across the Shuya River

The Karelians have traditionally been Russian Orthodox. Lutheranism was brought to the area by the Finnish immigrants during Sweden's conquest of Karelia and was common in regions that then belonged to Finland. Some Lutheran parishes remain in Karelia.

According to a 2012 official survey[17] 27% of the population of Karelia adheres to the Russian Orthodox Church, 2% are unaffiliated generic Christians, and 1% are members of Protestant churches. In addition, 44% of the population declared to be "spiritual but not religious", 18% is atheist, and 8% follows other religions or did not give an answer to the question.[17]

Industrial activity in Karelia is dominated by the forest and wood processing sector. Timber logging is carried out by a large number of small enterprises whereas pulp and paper production is concentrated in five large enterprises, which produce about a quarter of Russia's total output of paper.[21] Three largest companies in the pulp and paper sector in 2001 were: OAO Kondopoga (sales of $209.4 mln in 2001), Segezha Pulp and Paper Mill ($95.7 mln) and OAO Pitkjaranta Pulp Factory ($23.7 mln).[11]

In 2007, extractive industries (including extraction of metal ores) amounted to 30% of the republic's industrial output.[19] There are about 53 mining companies in Karelia, employing more than 10,000 people.[22] One of the most important companies in the sector is OAO Karelian Pellet, which is the 5th largest of Russia's 25 mining and ore dressing enterprises involved in ore extraction and iron ore concentrate production. Other large companies in the sector were OAO Karelnerud, Mosavtorod State Unitary Enterprise and Pitkjaranta Mining Directorate State Unitary Enterprise.[11]

There is a federal railway (see Murmansk Railway) across Karelia that connects Murmansk Region with St. Petersburg, Moscow, the center of Russia and with Finland. The railroad crosses Petrozavodsk, Kondopoga. 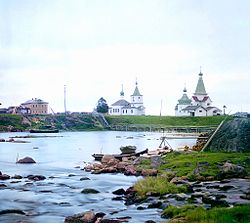 View of the old town of Kem in 1916, photograph by Sergey Prokudin-Gorsky

Karelia is sometimes called "the songlands" in the Finnish culture, as Karelian poems constitute most of the Karelo-Finnish epic Kalevala.