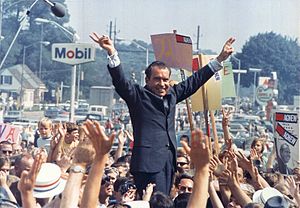 Nixon's first challenger was Michigan Governor George W. Romney. A Gallup poll in mid-1967 showed Nixon with 39%, followed by Romney with 25%. However, in a slip of the tongue, Romney told a news reporter that he had been "brainwashed" by the military and the diplomatic corps into supporting the Vietnam War; the remark led to weeks of ridicule in the national news media. As the year 1968 opened, Romney was opposed to further American intervention in Vietnam and had decided to run as the Republican version of Eugene McCarthy (New York Times 2/18/1968). Romney's support faded slowly, and he withdrew from the race on February 28, 1968. (New York Times 2/29/1968).

Nixon won a resounding victory in the important New Hampshire primary on March 12, winning 78% of the vote. Antiwar Republicans wrote in the name of New York Governor Nelson Rockefeller, the leader of the GOP's liberal wing, who received 11% of the vote and became Nixon's new challenger. Nixon led Rockefeller in the polls throughout the primary campaign. Rockefeller defeated Nixon in the Massachusetts primary on April 30 but otherwise fared poorly in the state primaries and conventions.

By early spring, California Governor Ronald Reagan, the leader of the GOP's conservative wing, had become Nixon's chief rival. In the Nebraska primary on May 14, Nixon won with 70% of the vote to 21% for Reagan and 5% for Rockefeller. While this was a wide margin for Nixon, Reagan remained Nixon's leading challenger. Nixon won the next primary of importance, Oregon, on May 15 with 65% of the vote and won all the following primaries except for California (June 4), where only Reagan appeared on the ballot. Reagan's margin in California gave him a plurality of the nationwide primary vote, but when the Republican National Convention assembled, Nixon had 656 delegates according to a UPI poll (with 667 needed for the nomination).

At the 1968 Republican National Convention in Miami Beach, Florida, Reagan and Rockefeller planned to unite their forces in a stop-Nixon movement, but the strategy fell apart when neither man agreed to support the other for the nomination. Nixon won the nomination on the first ballot. Nixon then chose Maryland Governor Spiro Agnew to be his Vice-Presidential candidate, despite complaints from within the GOP that Agnew was an unknown quantity, and that a better-known and more popular candidate, such as Romney, should have been the Vice-Presidential nominee. It was also reported that Nixon's first choice for running mate was his longtime friend and ally, Robert Finch, who was Lt. Governor of California since 1967 and later his HEW Secretary, but Finch declined the offer and, in any case, had he run he would have put the Republican ticket at a disadvantage as the Constitution prevents a member of the Electoral College from voting for both President and Vice-President from the Elector's home state.