Republics of the Soviet Union

From Infogalactic: the planetary knowledge core
Jump to: navigation, search
"Soviet socialist republic" redirects here. For the type of government, see Soviet republic (system of government).
This article is about the constituent republics of the Soviet Union. For other uses, see Soviet Republic.

In the final decades of its existence, the Soviet Union officially consisted of fifteen Soviet Socialist Republics (SSRs). All of them, with the exception of the Russian Federation (until 1990), had their own local party chapters of the All-Union Communist Party.

Outside the territory of the Russian Federation, the republics were constituted mostly in lands that had formerly belonged to the Russian Empire and had been acquired by it between the 1700 Great Northern War and the Anglo-Russian Convention of 1907.

In 1944, amendments to the All-Union Constitution allowed for separate branches of the Red Army for each Soviet Republic. They also allowed for Republic-level commissariats for foreign affairs and defense, allowing them to be recognized as de jure independent states in international law. This allowed for two Soviet Republics, Ukraine and Byelorussia, (as well as the USSR as a whole) to join the United Nations General Assembly as founding members in 1945.[3][4][5]

All of the former Republics of the Union are now independent countries, with eleven of them (all except the Baltic states and Georgia) being very loosely organized under the heading of the Commonwealth of Independent States.

However, most of the international community did not consider the Baltic countries (Lithuania, Latvia, and Estonia) to have legitimately been part of the USSR. The Baltic states assert that their incorporation into the Soviet Union in 1940 (as the Lithuanian, Latvian, and Estonian SSRs) under the provisions of the 1939 Molotov–Ribbentrop Pact was illegal, and that they therefore remained independent countries under Soviet occupation.[6][7] Their position is supported by the European Union,[8] the European Court of Human Rights,[9] the United Nations Human Rights Council[10] and the United States.[11] In contrast, the Russian government and state officials maintain that the Soviet annexation of the Baltic states was legitimate.[12]

Constitutionally, the Soviet Union was a federation. In accordance with provisions present in the Constitution (versions adopted in 1924, 1936 and 1977), each republic retained the right to secede from the USSR. Throughout the Cold War, this right was widely considered to be meaningless; however, the corresponding Article 72 of the 1977 Constitution was used in December 1991 to effectively dissolve the Soviet Union, when Russia, Ukraine, and Belarus seceded from the Union.

In practice, the USSR was a highly centralised entity from its creation in 1922 until the mid-1980s when political forces unleashed by reforms undertaken by Mikhail Gorbachev resulted in the loosening of central control and its ultimate dissolution. Under the constitution adopted in 1936 and modified along the way until October 1977, the political foundation of the Soviet Union was formed by the Soviets (Councils) of People's Deputies. These existed at all levels of the administrative hierarchy, with the Soviet Union as a whole under the nominal control of the Supreme Soviet of the USSR, located in Moscow within the Russian Federation.

Along with the state administrative hierarchy, there existed a parallel structure of party organizations, which allowed the Politburo to exercise large amounts of control over the republics. State administrative organs took direction from the parallel party organs, and appointments of all party and state officials required approval of the central organs of the party.

Each republic had its own unique set of state symbols: a flag, a coat of arms, and, with the exception of Russia until 1990, an anthem. Every republic of the Soviet Union also was awarded with the Order of Lenin. 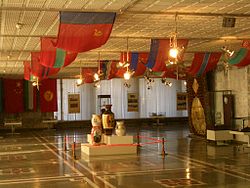 The republics and the dissolution of the Soviet Union

In the later decades of its existence, the Soviet Union consisted of 15 Soviet Socialist Republics. Under Mikhail Gorbachev, openness and restructuring were intended to liberalise and open up the Soviet Union. However, they had a number of effects which caused the power of the republics to increase. First, political liberalization allowed the governments within the republics to gain legitimacy by invoking democracy, nationalism, or a combination of both. In addition, liberalization led to fractures within the Communist Party which resulted in reduced ability to effectively govern the Union. The rise of nationalist and right-wing movements, notably led in Russia by Boris Yeltsin, in the previously homogeneously Communist political system led to the crumbling of the Union's foundations. With the central role of the Communist Party removed from the constitution, the Communist Party lost its control over the political system and was banned from operating after an attempted coup d'état.

Throughout the unravelling of the Restructuring, the Soviet government attempted to find a new structure which would reflect the increasing power of the republics. These efforts proved unsuccessful, and the republics began to secede from the Union. On 8 December 1991, the remaining republic leaders signed the Belavezha Accords which agreed that the USSR would be dissolved and replaced with a Commonwealth of Independent States. On 25 December, President Gorbachev announced his resignation and turned all executive powers over to Yeltsin. The next day the Council of Republics voted to dissolve the Union. Since then, the republics have been governed independently with some adopting significantly more liberal policies while others, particularly in Central Asia, retain leadership personnel from the Soviet time to this day.

^a The annexation of the Baltic republics in 1940 is considered an illegal occupation by the current Baltic governments and by a number of Western countries, including the United States and the European Union.[6][8][9][10][11][13][14][15] The Soviet Union considered the initial annexation legal, but officially recognized their independence on September 6, 1991, three months prior to its final dissolution.

Other Soviet republics of the Soviet Union

The leader of the People's Republic of Bulgaria, Todor Zhivkov, suggested in the early 1960s that the country should become a Soviet socialist republic of the USSR, but the offer was rejected.[16][17][18]

Autonomous Republics of the Soviet Union

Several of the Union Republics themselves, most notably Russia, were further subdivided into Autonomous Soviet Socialist Republics (ASSRs). Though administratively part of their respective Union Republics, ASSRs were also established based on ethnic/cultural lines.