From Infogalactic: the planetary knowledge core
Jump to: navigation, search
For other uses, see Respect (disambiguation). 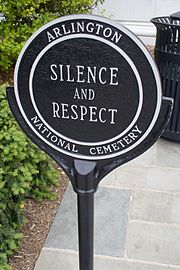 Respect is a positive feeling of admiration or deference for a person or other entity (such as a nation or a religion), and also specific actions and conduct representative of that esteem. Respect can be a specific feeling of regard for the actual qualities of the one respected (e.g., "I have great respect for her judgment"). It can also be conduct in accord with a specific ethic of respect.

Respect can be both given and/or received. Depending on an individual's cultural reference frame, respect can be something that is earned. Respect is often thought of as earned or built over time. Often, continued caring interactions are required to maintain or increase feelings of respect among individuals. Chivalry, by some definitions, contains the outward display of respect.

Respect should not be confused with tolerance. The antonym and opposite of respect is disrespect.

For others in society

Some people earn the respect of individuals by assisting others or playing important social roles. In many cultures, individuals are considered to be worthy of respect until they prove otherwise. Courtesies that show respect include simple words and phrases like "thank you" in the West, simple physical gestures like a slight bow in the East, a smile, or direct eye contact.

Respect is shown in many different love languages by following certain grammatical conventions, especially in referring to individuals.

An honorific is a word or expression (often a pronoun) that conveys respect when used in addressing or referring to a person or animal.

Typically honorifics are used for second and third persons; use for first person is less common. Some languages have anti-honorific first person forms (like "your most humble servant" or "this unworthy person") whose effect is to enhance the relative honor accorded a second or third person.

For instance, it is disrespectful to not use polite language and honorifics when speaking in Japanese with someone having a higher social status. The Japanese honorific "san" can be used when speaking English.[1]

In China it is rude to call someone by their first name unless you have known them for a long period of time. In work-related situations people address each other by their title. At home people often refer to each other by nicknames or terms of kinship.[2] In the Chinese culture, individuals often address their friends as juniors and seniors even if they are just a few months younger or older. When a Chinese person asks someone their age they often do this so they know how to address the person.[2] 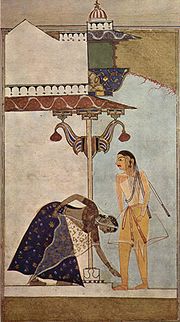 A wife touching the feet of her husband.

In some areas[which?] of India, it is customary that, out of respect, when a person's foot accidentally touches a book or any written material (considered to be a manifestations of Saraswati, the goddess of knowledge) or another person's leg, it will be followed by an apology in the form of a single hand gesture (Pranāma) with the right hand, where the offending person first touches the object with the finger tips and then the forehead and/or chest. This also counts for money, which is considered to be a manifestation of the goddess of wealth Lakshmi.[3] Pranāma, or the touching of feet in Indian culture is a sign of respect. For instance, when a child is greeting his or her grandparent, they typically will touch their hands to their grandparents' feet. In Indian culture, it is believed that the feet are a source of power.[4]

Many gestures or physical acts that are common in the West can be considered disrespectful in Japan. For instance, one should not point directly at someone.[5] When greeting someone or thanking them, it may be insulting if the person of lower status does not bow lower than the person with higher status. The duration and level of the bow depends on many factors such as age and status.[6] Some signs of physical respect apply to women only. If a woman does not wear cosmetics or a brassiere, it is possible that she will be considered unprofessional or others may think she does not care about the situation.[5]

Unlike Japanese culture, it is not necessary in Chinese culture to bow to one another as a greeting or parting gesture. Bowing is generally reserved as a sign of respect for elders and ancestors. When bowing, they place the fist of the right hand in the palm of their left at stomach level. The deeper the bow, the more respect they are showing.

In Chinese culture, there is not much participation in physical contact, especially when doing business because this can be seen as too casual, thus disrespectful. It is considered rude to slap, pat, or put one's arm around the shoulders of another.[7] However, affection in same-sex friendships in East Asia is much more pronounced than in the West. Same-sex friends will often be seen with their arms around one another, holding hands, and other signs of physical affection.[8]

It is uncommon to see very many hand gestures being used in Chinese culture because this is often considered to be excessive. [2] The Chinese sometimes do not smile or exchange greetings with strangers. Smiling or being friendly to someone you do not know well can be considered rude and too familiar. It is also common to see Chinese women covering their mouths when they laugh. Traditionally, a woman who laughed too loudly was considered to be uncouth and ill bred.[2]

Traditionally, there was not much hand-shaking in Chinese culture. However, this gesture is now widely practiced among men, especially when greeting Westerners or other foreigners. Many Westerners may find Chinese handshakes to be too long or too weak, but this is because a weaker handshake is a gesture of humility and respect.[2]

Kowtowing, or kneeling and bowing so deeply that one’s forehead is touching the floor, is practiced during worship at temples. Kowtowing is a powerful gesture reserved mainly for honoring the dead or offering deep respect at a temple.[2]

Many codes of behavior revolve around young people showing respect to older people. Like in many cultures, younger Chinese individuals are expected to defer to older people, let them speak first, sit down after them and not contradict them. Sometimes when an older person enters a room, everyone stands. People are often introduced from oldest to youngest. Often time, younger people will go out their way to open doors for their elders and not cross their legs in front of them. The older you are the more respect you are expected to be treated with.[2]

As a cultural value 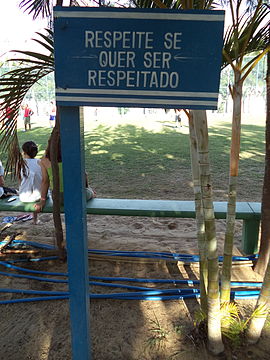 Sign in São João da Barra saying respect if you want to be respected.

In indigenous American societies the perspective on respect differs slightly because it serves as an important concept valued in their culture’s context. Aside from meaning positive feelings of esteem or deference respeto, the Spanish translation of respect, is also viewed as a moral value that teaches indigenous individuals about their culture.[9] In addition, this moral value is treated as a process that influences certain participation in the community and also helps the individual develop and become integrated into their culture’s community. During childhood is when this value of respect is taught because indigenous children participating in and learning about their community is an important aspect of the culture.

Respect as a form of behavior and participation is especially important in childhood as it serves as a basis of how the child must conduct themselves in their community. Children engage in mature activities such as cooking for the family, cleaning and sweeping the house, caring for infant peers, and crop work. Indigenous children learn to view their participation in these activities are representation of respect. Through his manner of participation of activities of respect is how children not only learn about culture but also practice it as well.[10]