Responsible government is a conception of a system of government that embodies the principle of parliamentary accountability, the foundation of the Westminster system of parliamentary democracy. Governments (the equivalent of the executive branch) in Westminster democracies are responsible to a local legislative assembly rather than to the monarch, or, in a colonial context, to the imperial government. If the parliament is bicameral, then the government is responsible first to the parliament's lower house, the more numerous (and often more representative) component of the legislature, and the chamber that is often given powers of special importance to the executive such as the power to initiate taxing and spending measures.

Responsible government manifests itself in several ways. Ministers are accountable to Parliament for their decisions and for the performance of their departments. This requirement to make announcements and to answer questions in Parliament means that ministers have to have the privileges of the "floor" which are only granted to those who are members of either house of Parliament. Secondly, and most importantly, although the ministers are officially appointed by the sovereign authority of the head of state and can theoretically be dismissed at the pleasure of the sovereign, they concurrently retain their office subject to their holding the confidence of the lower house of Parliament. When the lower house has passed a motion of no confidence in the government, the government must immediately resign or submit itself to the electorate in a new general election.

In turn, the titular head of the executive — a monarch, a representative such as a Governor-General, or (in parliamentary republics) a President or similar elected head of state — is expected to govern (almost) exclusively through the responsible ministers, by acting on their formal advice. There must never be a shadow or unofficial government, or body of secret advisers, established as an alternative day to day executive, nor is the head the executive to attempt to personally direct the activities of the civil service.

In the aftermath of the American Revolution, the British government was sensitive to unrest in its remaining colonies with large populations of British colonists. After the 1837 Lower Canada Rebellion led by Louis-Joseph Papineau, and the 1837–1838 Upper Canada Rebellion led by William Lyon Mackenzie, Lord Durham was appointed governor general of British North America and had the task of examining the issues and determining how to defuse tensions. In his report, one of his recommendations was that colonies which were developed enough should be granted "responsible government". This term specifically meant the policy that British-appointed governors should bow to the will of elected colonial assemblies.

The first instance of responsible government in the British Empire outside of the United Kingdom itself was achieved by the colony of Nova Scotia in January–February 1848 through the efforts of Joseph Howe. The plaque in the Nova Scotia House of Assembly erected by the Historic Sites and Monuments Board of Canada reads:

First Responsible Government in the British Empire.
The first Executive Council chosen exclusively from the party having a majority in the representative branch of a colonial legislature was formed in Nova Scotia on 2 February 1848. Following a vote of want of confidence in the preceding Council, James Boyle Uniacke, who had moved the resolution, became Attorney General and leader of the Government. Joseph Howe, the long-time campaigner for this "Peaceable Revolution", became Provincial Secretary. Other members of the Council were Hugh Bell, Wm. F. Desbarres, Lawrence O.C. Doyle, Herbert Huntingdon, James McNab, Michael Tobin, and George R. Young.

The colony of New Brunswick soon followed in May 1848 when Lieutenant Governor Edmund Walker Head brought in a more balanced representation of Members of the Legislative Assembly to the Executive Council and ceded more powers to that body. 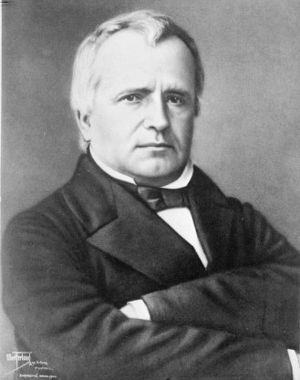 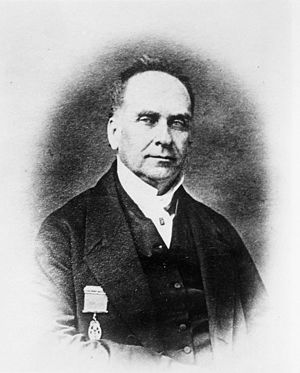 In the Province of Canada, responsible government was put to the test in 1849, when Reformers in the legislature passed the Rebellion Losses Bill. This was a law that provided compensation to French-Canadians who suffered losses during the Rebellions of 1837–1838 in Lower-Canada. The Governor General, Lord Elgin, had serious misgivings about the bill but nonetheless assented to it despite demands from the Tories that he refuse to do so. Elgin was physically assaulted by an English-speaking mob for this, and the Montreal Parliament building was burned to the ground in the ensuing riots. Nonetheless, the Rebellion Losses Bill helped entrench responsible government into Canadian politics.

In time, the granting of responsible government became the first step on the road to complete independence. Canada gradually gained greater and greater autonomy over a considerable period of time through inter imperial and commonwealth diplomacy, including the British North America Act of 1867, the Statute of Westminster of 1931, and even as late as the patriation of the British North America Act in 1982 (see Constitution of Canada).

While the various colonies in Australia were either sparsely populated or penal settlements or both, executive power was in the hands of the Governors, who, because of the great distance from their superiors in London and the resulting very slow communication, necessarily exercised vast powers. However, the early colonists, coming mostly from the United Kingdom, were familiar with the Westminster system and made efforts to reform it to increase the opportunity for ordinary men to participate.

The Governors and London therefore set in motion a gradual process of establishing a Westminster system in the colonies, not so fast as to get ahead of population or economic growth, nor so slow as to provoke clamouring for revolutionary change as happened in America. Initially, this took the form of appointed or partially elected Legislative Councils. Then, during the 1850s, all Australian colonies except Western Australia, along with New Zealand, established both representative and responsible government; Western Australia did the same in 1890. 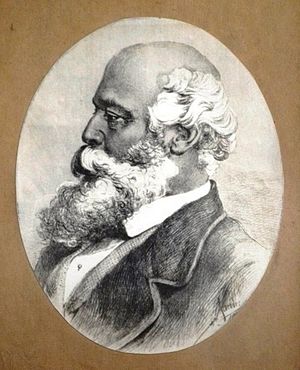 John Molteno, Father of Responsible Government and first Prime Minister of the Cape. 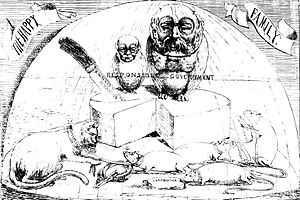 Cartoon critical of responsible government, showing power and positions divided between various factions by Cape leaders, depicted as owls, Molteno (to the right) and Saul Solomon.

The Cape Colony, in Southern Africa, was under responsible self-government from 1872 until 1910 when it became the Cape Province of the new Union of South Africa.[1]

Under its previous system of representative government, the Ministers of the Cape Government reported directly to the British Imperial Governor, and not to the locally elected representatives in the Cape Parliament. Among Cape citizens of all races, growing anger at their powerlessness in influencing unpopular imperial decisions had repeatedly led to protests and rowdy political meetings – especially during the early "Convict Crisis" of the 1840s. A popular political movement for responsible government soon emerged, under local leader John Molteno. A protracted struggle was then conducted over the ensuing years as the movement (known informally as "the responsibles") grew increasingly powerful, and used their parliamentary majority to put pressure on the British Governor, withholding public finances from him, and conducting public agitations. Not everyone favoured responsible government though, and pro-imperial press outlets even accused the movement of constituting "crafts and assaults of the devil".[2]

Finally, in 1872, the Colonial Office and new Governor Henry Barkly were won over, and Molteno instituted responsible government, making the Ministers directly responsible to the Cape Parliament, and becoming the Cape's first Prime Minister.[3]

The ensuing period saw an economic recovery, a massive growth in exports and an expansion of the colony's frontiers. Despite political complications that arose from time to time (such as an ill-fated scheme by the British Colonial Office to enforce a confederation in Southern Africa in 1878, and tensions with the Afrikaner-dominated Government of Transvaal over trade and railroad construction), economic and social progress in the Cape Colony continued at a steady pace until a renewed attempt to extend British control over the hinterland caused the outbreak of the Anglo-Boer Wars in 1899.[4]

An important feature of the Cape Colony under responsible government was that it was the only state in southern Africa (and one of very few in the world at the time) to have a non-racial system of voting. [5][6] Later however – following the South Africa Act 1909 to form the Union of South Africa – this multi-racial universal suffrage was steadily eroded, and eventually abolished by the Apartheid government in 1948.