From Infogalactic: the planetary knowledge core
Jump to: navigation, search
This article is about the city of Reutlingen, capital of Reutlingen district. For the district itself, see Reutlingen (district).

listen)) is a city in Baden-Württemberg, Germany. It is the capital of the eponymous district of Reutlingen. As of April 2008, it has a population of 109,828.[2] Reutlingen has a university of applied sciences, which was founded in 1855, originally as a weavers' school. Today Reutlingen is home to an established textile industry and also houses machinery, leather goods and steel manufacturing facilities. It is famous for having the narrowest street in the world, Spreuerhofstraße (width 31 cm).[3] 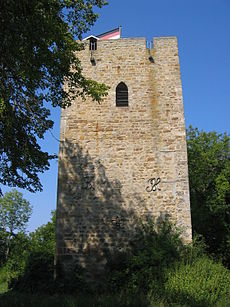 Reutlingen is located about 35 km (22 mi) south of the State capital of Baden-Württemberg, Stuttgart. It lies in the Southwest corner of Germany, right next to the Swabian Jura, and that is why it is often called The gate to the Swabian Jura (German: Das Tor zur Schwäbischen Alb). The Echaz river, a tributary of the Neckar, flows through the town centre.

Along with the old university town of Tübingen (about 15 km (9.3 mi) to the west), Reutlingen is the centre of the Neckar-Alb region. It is also part of the larger Stuttgart Metropolitan Region.

Spendhaus, first home of the weaving school that would become Reutlingen University

The first settlements in the area are believed to date from the 4th or 5th century. Some time around 1030, Count Egino started to build a castle on top of the Achalm, one of the largest mountains in Reutlingen district (about 706 m). One of the towers of this castle was rebuilt in the 19th century and is open to visitors. The name Reutlingen was first mentioned in writing in the so-called Bempflingen Treaty (German: Bempflinger Vertrag) which is dated approximately 1089–90.

Around 1180, Reutlingen received market rights and, between 1220 and 1240 it was promoted to city status and city-walls and fortifications were built. Shortly thereafter, from 1247–1343, the town's landmark, the St. Mary's Church (German: Marienkirche) was built.

In 1377 Reutlingen was the scene of a victory by the Swabian League, formed in the previous year by 14 Swabian cities, led by Ulm, over the Count of Württemberg. In 1519, a later Swabian League came to Reutlingen's help when Ulrich, Duke of Württemberg attempted to seize the city; the League landed a crushing blow, conquering Württemberg and selling it to Charles V. In 1495 and 1516 the jews were exiled from the town. [4]

As a result of such struggles, Reutlingen became an Imperial City of the Holy Roman Empire, free from allegiance to the Duke of Württemberg. In 1530, Reutlingen's city council signed the Augsburg Confession, and in 1580 and the Formula of Concord, key documents of Lutheranism. In 1803, in the wake of the French Revolutionary Wars, Reutlingen lost its independence in the German Mediatisation, being restored to Württemberg.

The worst disaster in the history of Reutlingen happened in 1726, when a major fire swept through the city, destroying 80% of all residential houses and almost all public buildings, and making 1,200 families homeless. The impact of this fire, which lasted three days, is still visible today.

During World War II, the wings of the V-1 flying bomb were manufactured in Reutlingen, making the city the target of several allied bombing raids.

On Mutscheltag (the first Thursday after Epiphany), townspeople gather in halls and homes to play games of dice, the winner of which earns parts or whole Mutschel loaves of bread. The Mutschelspiele (Mutschel games) consist of small games scored by tally marks, and are won both independently and by grand total at the end of the hour or night. This tradition is unique to the city of Reutlingen. 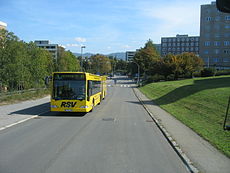 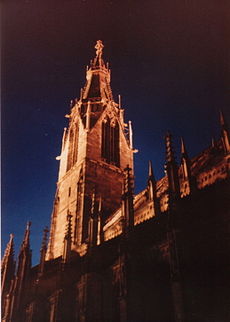 Reutlingen University is a university of applied sciences, focusing on hands-on learning, which is apparent in their mandatory internship for all business majors. The university is an internationally friendly school with 111 cooperative campuses worldwide. Classes are generally taught in German; however, in some Bachelor programs and in the Master's programs classes are taught in English.

Reutlingen is twinned with: