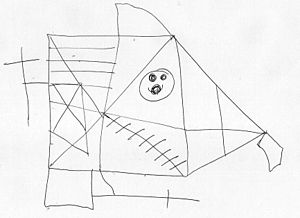 Example of a copy of the Rey–Osterrieth figure similar to those produced by children or neurological patients.

The Rey–Osterrieth complex figure test (ROCF) is a neuropsychological assessment in which examinees are asked to reproduce a complicated line drawing, first by copying it freehand (recognition), and then drawing from memory (recall). Many different cognitive abilities are needed for a correct performance, and the test therefore permits the evaluation of different functions, such as visuospatial abilities, memory, attention, planning, and working memory (executive functions). First proposed by Swiss psychologist André Rey in 1941 and further standardized by Paul-Alexandre Osterrieth in 1944, it is frequently used to further explain any secondary effect of brain injury in neurological patients, to test for the presence of dementia, or to study the degree of cognitive development in children.

Three conditions are most commonly used in the ROCF.[1][2]

During the 1940s, psychologists throughout the world were facing difficulty in eliciting the specific deficits exhibited by individuals (both adults and children) who had experienced traumatic brain injury. In 1941, the Swiss psychologist André Rey was working at the University of Geneva and recognized the necessity of differentiating between "primary effects, which are a direct result of the insult to the head, and the secondary effects, which develop out of subjective reactions determined by the loss of awareness from the physical impairments".[4] One of the many forms of assessment that Rey detailed in his 1941 report was a complex figure composed of many different shapes, line segments, and other elements.[5]

In 1944, Paul-Alexandre Osterrieth, who had worked as a research assistant under André Rey at the University of Geneva, utilized the figure Rey had developed in his work with young children.[6] Osterrieth proposed to subcategorize the figure into 18 elements and score them based on their presence, completeness, and correct placement. This 18-point scoring system is still commonly used today in evaluating an examinee's performance on the ROCF test.

Unlike Rey, Osterrieth was primarily interested in the measure as an assessment of whether or not children had developed the concept of a holistic or gestalt principle by various ages, as manifested by the way they approached the figure drawing. Based on his experimentation, Osterrieth recognized several important trends. Specifically, he noticed that the principle of gestalt seems to stabilize around the age of nine years in children. Also, he noted several different approaches that the children used in constructing the figure, each of which appears to be roughly correlated with a particular age group:

Additionally, Osterrieth noticed that strategy was a good predictor of the child's performance on all three of the various tasks.

In 1959 American (German immigrant)[citation needed] child psychologist Edith Meyer Taylor, who had been a student of Arnold Gesell and Jean Piaget, gave more elaborate descriptions on the 18-point scoring system initially proposed by Osterrieth. She had also briefly worked with Rey in Geneva and credited him with inspiring her to pursue this particular aspect of psychology.[7]

In 1969, Laughlin B. Taylor developed a second complex figure that is comparable to Rey's and can be therefore used to eliminate the memory effect in a second evaluation.[8][9] Explicit scoring criteria based on the Taylor-Osterrieth method have been developed for both the Rey-Osterrieth and Taylor Complex Figure Tests, although the Taylor figure has been found to be more easily remembered than the Rey-Osterrieth, calling into question their interchangeability.[10]