From Infogalactic: the planetary knowledge core
(Redirected from Rhône River)
Jump to: navigation, search
For other uses, see Rhône (disambiguation). 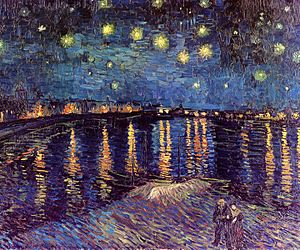 Starry Night Over the Rhone, by Vincent van Gogh (1888)

The name Rhône continues the name Rhodanus (Greek Ῥοδανός Rhodanos) in Greco-Roman geography. The Gaulish name of the river was *Rodonos or *Rotonos (from a PIE root *ret- "to run, roll" frequently found in river names).

The Greco-Roman as well as the reconstructed Gaulish name is masculine, as is French le Rhône. This form survives in the Italian namesake, Rodano. German has adopted the French name but given it the feminine gender, die Rhone. The original German adoption of the Latin name was also masculine, der Rotten; it survives only in the Upper Valais (dialectal Rottu).

In French, the adjective derived from the river is rhodanien, as in le sillon rhodanien (literally "the furrow of the Rhône"), which is the name of the long, straight Saône and Rhône river valleys, a deep cleft running due south to the Mediterranean and separating the Alps from the Massif Central.

Before railroads and highways were developed, the Rhône was an important inland trade and transportation route, connecting the cities of Arles, Avignon, Valence, Vienne and Lyon to the Mediterranean ports of Fos, Marseille and Sète. Travelling down the Rhône by barge would take three weeks. By motorized vessel, the trip now takes only three days. The Rhône is classified as a class V waterway[1] from the mouth of the Saône to the sea. The Saône, which is also canalized, connects the Rhône ports to the cities of Villefranche-sur-Saône, Mâcon and Chalon-sur-Saône. Smaller vessels (up to CEMT class I) can travel further northwest, north and northeast via the Centre-Loire-Briare and Loing Canals to the Seine, via the Canal de la Marne à la Saône (recently often called the "Canal entre Champagne et Bourgogne") to the Marne, via the Canal des Vosges (formerly called the "Canal de l'Est – Branche Sud") to the Moselle and via the Canal du Rhône au Rhin to the Rhine.

The Rhône is infamous for its strong current when the river carries large quantities of water: current speeds up to 10 kilometres per hour (6 mph) are sometimes reached, particularly in the stretch below the last lock at Valabrègues and in some of the diversion canals. The ten river locks are operated daily from 5:00 a.m. until 9:00 p.m. Night operation can be requested and is usually granted.[2]

The Rhône rises as an effluent of the Rhône Glacier in Valais, in the Swiss Alps, at an altitude of approximately 2,208 metres (7,244 ft).[3] From there it flows south through Gletsch to the Goms.Shortly before reaching Brig, it receives the waters of the Massa from the Aletsch Glacier. It flows onward through the valley which bears its name and runs initially in a westerly direction about thirty kilometers to Leuk, then southwest about fifty kilometers to Martigny .

Down as far as Brig, the Rhône is a torrent; it then becomes a great mountain river running southwest through a glacier valley. Between Brig and Martigny, it collects waters mostly from the valleys of the Pennine Alps to the south, whose rivers originate from the large glaciers of the massifs of Monte Rosa, Dom, and Grand Combin.

At Martigny, where it receives the waters of the Dranse on its left bank, the Rhone makes a strong turn towards the north. Going back to Lake Geneva, the valley narrows, a feature that has long given the Rhone valley strategic importance for the control of the Alpine passes. The Rhone then marks the boundary between the cantons of Valais (left bank) and Vaud (right bank), separating the Valais Chablais and Chablais Vaudois. It enters Lake Geneva near Le Bouveret.

From Lyon, it flows south, between the Alps and the Massif Central. At Arles, the Rhône divides into two major arms forming the Camargue delta, both branches flowing into the Mediterranean Sea, the delta being termed the Rhône Fan. The larger arm is called the "Grand Rhône", the smaller the "Petit Rhône". The average annual discharge at Arles is 1,710 cubic metres per second (60,000 cu ft/s).[4] 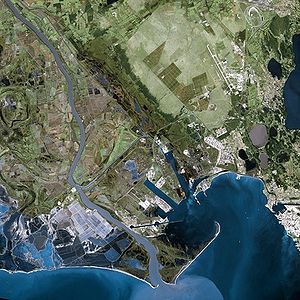 Mouth of the Rhône

The Rhône has been an important highway since the times of the Greeks and Romans. It was the main trade route from the Mediterranean to east-central Gaul.[5] As such, it helped convey Greek cultural influences to the western Hallstatt and the later La Tène cultures.[5] Celtic tribes living near the Rhône included the Seduni, Sequani, Segobriges, Allobroges, Segusiavi, Helvetii, Vocontii and Volcae Arecomici.[5]

Navigation was difficult, as the river suffered from fierce currents, shallows, floods in spring and early summer when the ice was melting, and droughts in late summer. Until the 19th century, passengers travelled in coches d'eau (water coaches) drawn by men or horses, or under sail. Most travelled with a painted cross covered with religious symbols as protection against the hazards of the journey.[6]

Trade on the upper river used barques du Rhône, sailing barges, 30 by 3.5 metres (98 by 11 ft), with a 75-tonne (165,000 lb) capacity. As many as 50 to 80 horses were employed to haul trains of five to seven craft upstream. Goods would be transshipped at Arles into 23-metre (75 ft) sailing barges called allèges d'Arles for the final run down to the Mediterranean.

The first experimental steam boat was built at Lyon by Jouffroy d'Abbans in 1783. Regular services were not started until 1829 and they continued until 1952. Steam passenger vessels 80 to 100 metres (260–330 ft) long made up to 20 kilometres per hour (12 mph) and could do the downstream run from Lyon to Arles in a day. Cargo was hauled in bateau-anguilles, boats 157 by 6.35 metres (515.1 by 20.8 ft) with paddle wheels amidships, and bateaux crabes, a huge toothed 'claw' wheel 6.5 metres (21 ft) across to grip the river bed in the shallows to supplement the paddle wheels. In the 20th century, powerful motor barges propelled by diesel engines were introduced, carrying 1,500 tonnes (3,300,000 lb).

In 1933, the Compagnie Nationale du Rhône (CNR) was established to tame the river. Some progress was made in deepening the navigation channel and constructing scouring walls, but World War II brought such work to a halt. In 1942, following the collapse of Vichy France, Italian military forces occupied southeastern France up to the eastern banks of the Rhône, as part of the Italian Fascist regime's expansionist agenda.

In 1948, the government started construction on a series of locked barrages and canal cuts, to improve navigation and generate electricity, with locks raising boats up to 23 metres (75 ft).

Cities and towns along the Rhône include: 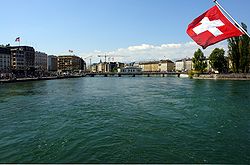 The Rhône through Geneva, Switzerland 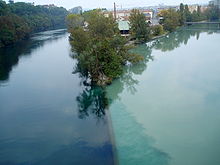 The Rhône (left) meeting the river Arve in Geneva