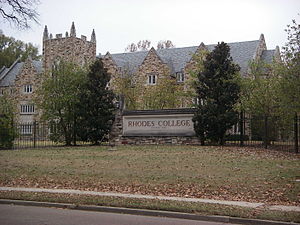 Rhodes College is a private, predominantly undergraduate, liberal arts college located in Memphis, Tennessee. Affiliated with the Presbyterian Church (USA), Rhodes is accredited by the Southern Association of Colleges and Schools and enrolls approximately 1,800 students.

Rhodes College was founded in 1848 in Clarksville, Tennessee as the Masonic University of Tennessee (and briefly as Montgomery Masonic College), the Institution was renamed Stewart College in 1850 in honor of its president, William M. Stewart. Under Stewart's leadership in 1855, control of the college passed to the Presbyterian Church. In 1875, the college added an undergraduate School of Theology and became Southwestern Presbyterian University. The School of Theology operated until 1917.

In 1925, president Charles Diehl led the move to the present campus in Memphis, Tennessee (the Clarksville campus later became Austin Peay State University). The college shortened its name to Southwestern. In 1945, the college adopted the name Southwestern at Memphis, to distinguish itself from other colleges and universities containing the name "Southwestern."

Finally, in 1984, the college's name was changed to Rhodes College to honor former college president, and Diehl's successor, Peyton Nalle Rhodes.[2] Since 1984, Rhodes has grown from a regionally recognized institution to a nationally ranked liberal arts college.[3] As enrollment has increased over the past 20 years, so has the proportion of students from outside Tennessee and the Southeast region.[4]

Dr. James Daughdrill served as president for over a quarter century, from 1973 to 1999. His successor is Dr. William E. Troutt, the 19th president of the college. 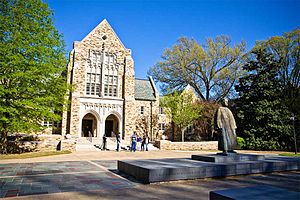 The academic environment at Rhodes centers around small classes and an emphasis on student research and writing. Students are encouraged to participate in off-campus activities and "service learning." They are also given the opportunity to participate in a variety of research-based programs, such as the Summer Plus program at St. Jude Children's Research Hospital, the Rhodes Institute for Regional Studies, the Center for Outreach and Development of the Arts, the Mike Curb Institute for Music, and the Rhodes Service Fellows program.

About one third of Rhodes students go on to graduate or professional school.[5] The acceptance rates of Rhodes alumni to law and business schools are around 95%, and the acceptance rate to medical schools is nearly twice the national average.[6]

Rhodes is featured in Loren Pope's Colleges That Change Lives[7] and on the cover of the 2008 Princeton Review Complete Book of Colleges.[8] U.S. News & World Report consistently ranks Rhodes among the nation's "top-tier" liberal arts colleges, ranking the school 47th among liberal arts colleges in 2010.[9] Forbes rated Rhodes 47th among all American colleges and universities in its 2010 publication of America's Best Colleges[10] Rhodes has been home to a chapter of the Phi Beta Kappa Society since 1949, one of 283 chapters nationwide. 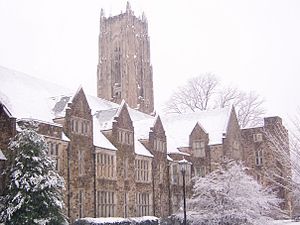 The campus covers a 100-acre (0.40 km2) tract in Midtown, Memphis across from Overton Park and the Memphis Zoo. Often cited for its beauty,[11] the campus design is notable for its stone Gothic architecture buildings, thirteen of which are currently listed on the National Register of Historic Places.[12]

When the entirely white Hein Park district adjacent to campus walled off access to the neighborhood through West Drive, predominately black neighbors from across Jackson Avenue sued under the Civil Rights Act of 1866.[13] In 1981 a narrowly divided U.S. Supreme Court found the barrier was legal, although dissenting Justice Thurgood Marshall admonished that “a group of white citizens has decided to act to keep Negro citizens from traveling through their urban "utopia" and the city has placed its seal of approval on the scheme."[14]

The original buildings, including Palmer Hall (1925), Kennedy Hall (1925), and Robb and White dormitories (1925), were designed by Henry Hibbs in consultation with Charles Klauder, who designed many buildings at Princeton University, alma mater of college president Charles Diehl.

Later buildings were designed by H. Clinton Parrent, a young associate of Hibbs who was present from the beginning. Parrent's buildings include the Catherine Burrow Refectory (1957), which was an expansion of Hibbs' original dining hall. Parrent also added Halliburton Tower (1962) to Palmer Hall. The 140-foot (43 m) bell tower was named in honor of explorer Richard Halliburton. The Paul Barret, Jr. Library holds a collection of Halliburton's papers.[15]

The campus was used as the setting of the movie Making the Grade.[16]

Rhodes' student body represents 46 states, the District of Columbia, and 11 foreign countries, and includes 20% students of color .The student-to-faculty ratio is 10:1.[17] Some of the approximately 30 majors include Economics and Business Administration, Biology, Political Science, English, and International Studies.

Rhodes is one of 62 colleges recently classified for both "Curricular Engagement" and "Outreach & Partnerships" in the "Community Engagement" category by The Carnegie Foundation for the Advancement of Teaching. Approximately 80% of Rhodes students participate in some form of community service by the time they graduate.[18] The curriculum includes a requirement that students participate in activities that broaden the connection between classroom experiences and the outside world. The mission statement of the college also reinforces community engagement, aspiring to "graduate students with...a compassion for others and the ability to translate academic study and personal concern into effective leadership and action in their communities and the world."[19]

Central to the life of the college is its Honor Code, administered by students through the Honor Council. Every student is required to sign the Code, which reads, "As a member of the Rhodes College community, I pledge my full and steadfast support to the Honor System and agree neither to lie, cheat, nor steal and to report any such violation that I may witness." Because of this, students enjoy a relationship of trust with their professors and benefits such as taking closed book final exams in the privacy of their own rooms.

Rites of Spring is a three-day music festival in early April. A major social event of the school year, it typically attracts several major bands from around the country. Rites to Play has in recent years brought elementary-school-age children to the campus. Rhodes students plan, organize, and execute a carnival for the children, who are sponsored by community agencies and schools that partner with Rhodes.

The college mascot is the lynx and the school colors are red and black.

Rhodes has two athletic national championships to its credit, with the baseball team earning a title in 1961 and the women's golf team earning one in 2014.[20]

The J. Hal Daughdrill Award is given to the "Most Valuable Player" of the Lynx football team. The award honors James Harold Daughdrill, Sr. (1903–1986), outstanding football player, athlete, business leader, and the father of Rhodes' eighteenth President.[21] The Rebecca Rish Gay Award and Walter E. Gay Award are given to the "Athletes of the Year" and are named after the parents of former President Daughdrill’s wife, Libby Daughdrill.[22]

With four national championships and eight national final round appearances, Rhodes's undergraduate mock trial program is one of the most prestigious in the country. Founded in 1986 by Professor Marcus Pohlmann, Rhodes has qualified to the American Mock Trial Association's National Championship tournament every year since its inception, with twenty-seven top ten finishes and over seventy All-American attorney and witness awards.

At the 2013 AMTA National Championship tournament in Washington, D.C., Rhodes A earned the national runner-up spot while Rhodes B placed fifth in its division. The teams are currently ranked second and seventeenth in the nation, respectively.

Buckman Hall houses a replica courtroom used by the teams for practicing. Every spring, Rhodes hosts one of the six AMTA Opening Round Championship tournaments in the Shelby County Courthouse in downtown Memphis. The program also hosts an informal invitational scrimmage tournament in Buckman Hall every autumn.[23][24]

There are a number of social fraternities and sororities at Rhodes. Approximately 45% of the students are members of Greek organizations. Fraternity and sorority lodges at Rhodes are not residential.

(in order of establishment at Rhodes)

(in order of establishment at Rhodes)