From Infogalactic: the planetary knowledge core
Jump to: navigation, search
For other uses, see Rhombus (disambiguation). 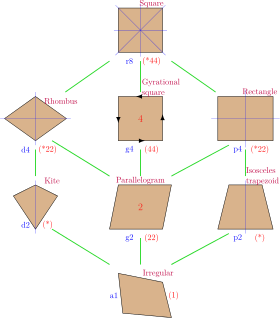 Every rhombus is a parallelogram and a kite. A rhombus with right angles is a square.[1][2]

The word "rhombus" comes from Greek ῥόμβος(rhombos), meaning something that spins,[3] which derives from the verb ρέμβω (rhembō), meaning "to turn round and round".[4] The word was used both by Euclid and Archimedes, who used the term "solid rhombus" for two right circular cones sharing a common base.[5]

A simple (non self-intersecting) quadrilateral is a rhombus if and only if it is any one of the following:[6][7]

Every rhombus has two diagonals connecting pairs of opposite vertices, and two pairs of parallel sides. Using congruent triangles, one can prove that the rhombus is symmetric across each of these diagonals. It follows that any rhombus has the following properties:

The first property implies that every rhombus is a parallelogram. A rhombus therefore has all of the properties of a parallelogram: for example, opposite sides are parallel; adjacent angles are supplementary; the two diagonals bisect one another; any line through the midpoint bisects the area; and the sum of the squares of the sides equals the sum of the squares of the diagonals (the parallelogram law). Thus denoting the common side as a and the diagonals as p and q, in every rhombus

A rhombus is a tangential quadrilateral.[8] That is, it has an inscribed circle that is tangent to all four sides.

File:Rhombus1.svg
The height h is the perpendicular distance between any two non-adjacent sides, or the diameter of the circle inscribed.

As for all parallelograms, the area A of a rhombus is the product of its base and its height (h). The base is simply any side length a:

The area can also be expressed as the base squared times the sine of any angle:

or as half the product of the diagonals p, q:

or as the semiperimeter times the radius of the circle inscribed in the rhombus (inradius):

The inradius (the radius of the incircle), denoted by r, can be expressed in terms of the diagonals p and q as:[8]

The dual polygon of a rhombus is a rectangle:[10]

The Varignon parallelogram of an equidiagonal quadrilateral is a rhombus.[11]

As the faces of a polyhedron

A rhombohedron is a three-dimensional figure like a cube, except that its six faces are rhombi instead of squares.

The rhombic dodecahedron is a convex polyhedron with 12 congruent rhombi as its faces.

The rhombic triacontahedron is a convex polyhedron with 30 golden rhombi (rhombi whose diagonals are in the golden ratio) as its faces.

The rhombic hexecontahedron is a stellation of the rhombic triacontahedron. It is nonconvex with 60 golden rhombic faces with icosahedral symmetry.

The rhombic enneacontahedron is a polyhedron composed of 90 rhombic faces, with three, five, or six rhombi meeting at each vertex. It has 60 broad rhombi and 30 slim ones.

The trapezo-rhombic dodecahedron is a convex polyhedron with 6 rhombic and 6 trapezoidal faces.

The rhombic icosahedron is a polyhedron composed of 20 rhombic faces, of which three, four, or five meet at each vertex. It has 10 faces on the polar axis with 10 faces following the equator.