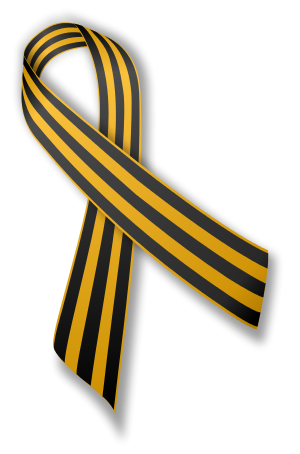 The Ribbon of Saint George (tied). The pattern is thought to symbolise fire and gunpowder. It is also thought to be derived from the colours of the original Russian imperial coat of arms (black eagle on a golden background).

The Ribbon of Saint George or Saint George's Ribbon (Russian: Георгиевская лента, Georgiyevskaya lenta) is a widely recognized military symbol in Russia. The ribbon consists of a black and orange bicolour pattern, with three black and two orange stripes. It appears as a component of many high military decorations awarded by the Russian Empire, the Soviet Union, and the current Russian Federation.

During Soviet times, the ribbon held no public significance.[1] The symbol was revived in Russia in 2005 as a response to the western oriented Orange Revolution in Ukraine.[1][2][2] That year, Russian state media along with youth organizations launched the campaign ahead of World War II memorial celebrations.[1] It[specify] was associated with units who were awarded the collective Guard battle honours during the conflict, due to the usage of the color scheme in the Great Patriotic War victory medal awarded to all personnel, civilian or military, who aided the war effort.

In Russia, the ribbon of Saint George is also used by civilians as a patriotic symbol and as a symbol of loyalty to the Kremlin, particularly since 2014.[3] In Ukraine and the Baltic states (Estonia, Latvia and Lithuania), the symbol has become widely associated with Russian nationalist and separatist sentiment.[4]

The Georgian ribbon emerged as part of the Order of Saint George, established in 1769 as the highest military decoration of Imperial Russia (and re-established in 1998 by Presidential decree) signed by then President of Russia Boris Yeltsin. While the Order of Saint George was normally not a collective award, the ribbon was sometimes granted to regiments and units that performed brilliantly during wartime and constituted an integral part of some collective battle honours (such as banners and pennants). When not awarded the full Order, some distinguished officers were granted ceremonial swords, adorned with the Georgian ribbon.[5]

In 1806, distinctive Georgian banners were introduced as a further battle honour awarded to meritorious Guards and Leib Guard regiments. The pike on which these flags were mounted was topped by the Cross of Saint George and adorned with 4,44 cm wide Georgian ribbons. It remained the highest collective military award in the Imperial Russian Army until the Revolution in 1917. It is worth noting that the tsarist version was yellow and black, not orange and black like the revived Soviet version.[6]

The symbolism of the orange and black (or yellow and black) is thought to represent fire and gunpowder of war, or the death and resurrection of Saint George, or the colours of the original Russian imperial coat of arms (black eagle on a golden background).[6] 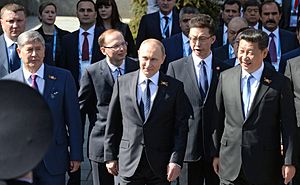 Presidents of Russia, China and Kyrgyzstan with Saint George ribbons during the 2015 Moscow Victory Day Parade

Established on 8 November 1943, the Order of Glory (Orden Slavy) was an order of the Soviet Union. It was awarded to non-commissioned officers and the rank-and-file of the armed forces, as well as to junior lieutenants of the air force, for bravery in the face of the enemy. The ribbon of the Order was orange with three black stripes - the same as that of the Cross of Saint George.

One of the most honourable medals in the Soviet Union, the medal "For the Victory over Germany" (Russian: За победу над Германией, Za pobedu nad Germaniyey) also features Saint George stripes. It was awarded to all the soldiers and officers who participated in the Eastern Front campaigns, and was the first award to be universally granted to all the veterans, for the most part, right after the end of the war.

The ribbon – along with the tricolored flag – was also used by the Russian Liberation Army that fought alongside Nazi Germany during World War II.[1]

In 2005, the 60th anniversary of Victory Day, news agency RIA Novosti and a youth civic organization launched a campaign that called on volunteers to distribute ribbons in the streets ahead of Victory Day.[1][5] Since then the ribbon is worn by civilians in Russia and other former republics of the Soviet Union as an act of commemoration and remembrance.[5] For the naming of the ribbons the diminutive form is used: георгиевская ленточка (georgiyevskaya lentochka, “small George ribbon”).[5] Since 2005 the ribbon is distributed every year all over Russia, and around the world in the preparation for 9 May and is on that day widely to be seen on wrists, lapels, and cars.[2][5] The motto that goes with it is "We remember, we are proud!"[5]

Yulia Latynina and other journalists have speculated the Russian government introduced the ribbon as a public relations response to the 2004 Orange Revolution in Ukraine in which demonstrators had adopted orange ribbons as their symbol.[1][2]

Use during the Ukrainian crisis 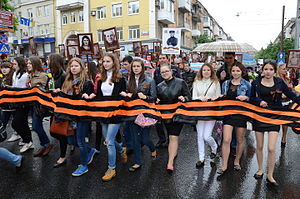 Local residents in Donetsk carry portraits of their ancestors and participants in World War II, 9 May 2015

During events of 2014 in Ukraine it was used by Antimaidan activists and pro-Russian population of Ukraine (especially in the south-east regions) as a symbol of pro-Russian and separatist sentiment.[7][8] The ribbon is also worn by members of the Donbass People's Militia paramilitary group. Euromaidan activists sometimes make derogatory reference to the Ribbon of Saint George as the "Colorado Ribbon", as the colors of the ribbon coincide with the colors of a Colorado potato beetle.[8][9]

In Kirovohrad, a decision was made by veterans to ban the symbol from Victory Day celebrations since it had become associated with separatist provocations. Instead, only Ukrainian state symbols would be used.[10] In Cherkasy, authorities urged veterans and supporters not to wear the ribbon or any other party symbols.[11]

The Ukrainian government replaced the ribbon with a red-and-black poppy, like those associated with Remembrance Day in Western Europe in 2014,[1][12] red and black also being the colours used by the Ukrainian Insurgent Army during the conflict.

A female police captain from Kharkiv was fired "for stupidity" for giving out the ribbon at the police station on 23 February 2015, the day which until 2014 was celebrated (in Kharkiv) as Defender of the Homeland Day.[13]

On 5 May 2014, the Belarusian Republican Youth Union encouraged activists not to use the ribbon. Other officials reported that the decision not to use the symbol was related to the situation in Ukraine, "where the ribbon is used by militants and terrorists".[14] In time for Victory Day 2015, the ribbon's colors were replaced by the red, green and white from the Flag of Belarus.[15] But the President of Belarus Alexander Lukashenko arrived on 7 May 2015 in Moscow with a Saint George ribbon combined with the flag of Belarus placed on the lapel of his jacket, thus showing his personal positive attitude to the ribbon.

During preparation for the first Victory Day parade in the Canadian city of Winnipeg on 10 May 2014, the Russian embassy distributed Ribbons of Saint George to participants. The move was considered controversial in view of the ongoing events in Ukraine with the Ukrainian Canadian Congress calling the ribbon a "symbol of terrorism."[16] 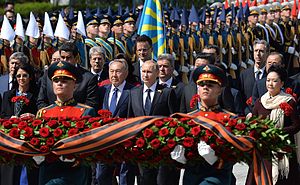 Some parties made statements intended to discourage the use of the ribbon in Kazakhstan in 2014 for Victory Day celebrations, suggesting that red (of the Red Army) and turquoise (the national color of Kazakhstan) should be used instead.[17] However, no official authority issued any comments.