Richard Adolf Zsigmondy (1 April 1865 – 23 September 1929) was an Austrian-Hungarian chemist. He was known for his research in colloids, for which he was awarded the Nobel Prize in chemistry in 1925. The crater Zsigmondy on the Moon is named in his honour.

Zsigmondy was born in Vienna, Austrian Empire, to Hungarian parents Irma Szakmáry, a poet born in Martonvásár, and Adolf Zsigmondy Sr., a scientist from Bratislava who invented several surgical instruments for use in dentistry. Zsigmondy family members were Lutherans. They originated from Johannes (hung. János) Sigmondi (1686–1746, Bártfa, Kingdom of Hungary) and included teachers, priests and Hungarian freedom-fighters. Richard was raised by his mother after his father's early death in 1880, and received a comprehensive education. He enjoyed hobbies such as climbing and mountaineering with his siblings. His elder brothers, Otto (a dentist) and Emil (a physician), were well-known mountain climbers; his younger brother, Karl Zsigmondy, became a notable mathematician in Vienna. In high school Richard developed an interest in natural science, especially in chemistry and physics, and experimented in his home laboratory.

Zsigmondy left organic chemistry to join the physics group of August Kundt at the University of Berlin, and completed his habilitation at the University of Graz in 1893. Because of his knowledge about glass and its colouring, in 1897 the Schott Glass factory offered him a job which he accepted. He invented the Jenaer Milchglas and conducted some research on the red Ruby glass.

Zsigmondy left Schott Glass in 1900, but remained in Jena as private lecturer to conduct his research. Together with the optical instrument manufacturer Zeiss, he developed the slit ultramicroscope. His scientific career continued in 1908 at the University of Göttingen, where he stayed for the rest of his professional career as professor of inorganic chemistry. In 1925, Zsigmondy received the Nobel Prize for Chemistry for his work on colloids and the methods he used, such as the ultramicroscope.

Before Zsigmondy finished his PhD thesis in organic chemistry, he published research on colouring glass with silver salts and dissolved silver particles, which he recovered by dissolving the glass in hydrofluoric acid. 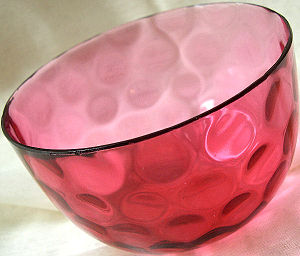 During his stay in Graz, Zsigmondy accomplished his most notable research work, on the chemistry of colloids. The exact mechanism which yields the red colour of the Cranberry or Ruby glass was a result of his studies of colloids.[2] In later years he worked on gold hydrosols and used them to characterize protein solutions. While in Jena he developed the slit ultramicroscope together with Henry Siedentopf. After moving to Göttingen, Zsigmondy improved his optical equipment for the observation of finest nanoparticles suspended in liquid solution. As a result, he introduced the immersion ultramicroscope in 1912.[3] 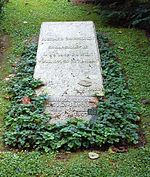 In 1903 Zsigmondy married Laura Luise Müller, with whom he had two daughters, Annemarie and Käthe. He died a few years after retirement in 1929 in Göttingen, Germany.

He was a cousin of the architect Frigyes Schulek, whose mother was Auguszta Zsigmondy. He is also related to the violinist Dénes Zsigmondy.