From Infogalactic: the planetary knowledge core
Jump to: navigation, search
This article is about the Austrian-German biochemist. For the American judge and politician, see United States House of Representatives elections in Michigan, 2010.

Kuhn was born in Vienna, Austria where he attended grammar school and high school. His interest in chemistry surfaced early; however he had many interests and decided late to study chemistry. Between 1910 and 1918 he was a schoolmate of Wolfgang Pauli, who was awarded the Nobel Prize in Physics for 1945. Beginning in 1918, Kuhn attended lectures at the University of Vienna in chemistry. He finished his chemistry studies at University of Munich and received his doctoral degree in 1922 with Richard Willstätter for a scientific work on enzymes.

After graduating, Kuhn continued his scientific career, first in Munich, then at the ETH Zurich and from 1929 onwards at the University of Heidelberg, where he was head of the chemistry department beginning in 1937. In 1928 he married Daisy Hartmann and the couple subsequently had two sons and four daughters. 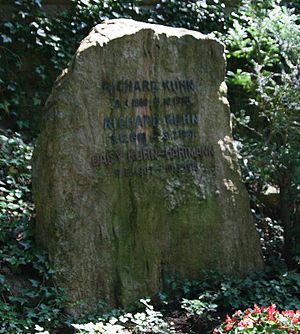 Kuhn's areas of study included: investigations of theoretical problems of organic chemistry (stereochemistry of aliphatic and aromatic compounds; syntheses of polyenes and cumulenes; constitution and colour; the acidity of hydrocarbons), as well as extensive fields in biochemistry (carotenoids; flavins; vitamins and enzymes). Specifically, he carried out important work on vitamin B2 and the antidermatitis vitamin B6.

He was subsequently awarded the Nobel Prize in Chemistry in 1938 for his "work on carotenoids and vitamins," but was unable to accept the award until after World War II.[1] Kuhn is also credited with the discovery of the deadly nerve agent Soman in 1944.[2]

Kuhn was editor of Justus Liebigs Annalen der Chemie from 1948.

Kuhn collaborated with high-ranking Nazi officials[3] and denounced three of his Jewish co-workers in 1936.[3]