Rush was born in Philadelphia, Pennsylvania. He was the second son (and third child) of Benjamin Rush (one of the signers of the Declaration of Independence and a prominent physician) and Julia (Stockton) Rush. He entered the College of New Jersey (now known as Princeton University) at the age of 14, and graduated in 1797 as the youngest member of his class. He was admitted to the bar in 1800, when he was barely 20 years old, and studied law at the office of William Draper Lewis.

Rush married Catherine Eliza Murray on August 29, 1809. They were the parents of ten children, of whom three sons and two daughters survived him.

After his entering the bar in 1800 Rush quickly gaining statewide and then national attention as a public speaker and successful trial lawyer. In 1811 he was appointed Attorney General of Pennsylvania. Shortly before this he had declined an offer to run for congress. In November 1811, President James Madison appointed Rush Comptroller of the Treasury.

He was acting Secretary of State from the start of James Monroe's term as president until the return of John Quincy Adams from Europe. During this time Rush concluded the Rush-Bagot Convention, demilitarizing the Canadian boundary on the Great Lakes.

In October 1817, Rush was appointed Minister to Britain to succeed John Quincy Adams, who had taken the position of Secretary of State upon his return. His "gentlemanly" attitude was appreciated by the British, and he remained there for nearly eight years, proving singularly effective in negotiating a number of important treaties, including the Anglo-American Treaty of 1818.

He became surprisingly popular in England, despite his previous anti-British record. In 1823, Rush negotiated with Britain over British proposals that the two countries issue a joint declaration against French involvement in Spain's rebelling American colonies, but Britain would not agree to American demands for recognition of the newly independent republics, leading to the separate American declaration of the Monroe Doctrine.

Richard Rush received one electoral vote as a Federalist for the office of U.S. Vice President in the 1820 election, even though the Federalist Party nominated no candidate for U.S. President in that election. And then again in March-April of 1824, Richard Rush was again honored with a single vote at the Democratic-Republican Party Caucus to be the party's candidate for the Office of U.S. Vice President for the upcoming 1824 U.S. Presidential Election. 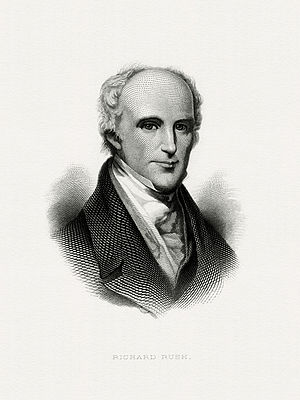 Bureau of Engraving and Printing portrait of Rush as Secretary of the Treasury.

Upon the election of John Quincy Adams in 1825, Rush (having made a study of Britain, and the British Navy in particular, while he was there) desired to become the Secretary of the Navy. Adams, however, immediately nominated him for the post of 8th Secretary of the Treasury, which he accepted. He served in this position with remarkable success during the entire Adams Administration from March 7, 1825 until March 5, 1829. Notably, he paid off nearly the whole public debt, and turned over to his successor a large treasury surplus.

In 1828, he was a candidate for Vice President on the re-election ticket with John Quincy Adams, but was defeated. After leaving the Treasury Department, he was sent to England and the Netherlands by the cities of Georgetown and Alexandria to negotiate a large loan for the cities, a mission that met with prompt success.

In 1836, President Andrew Jackson sent him to England as Commissioner to secure for the United States the legacy left the government by James Smithson. He was successful in this undertaking, bringing to this country the sum of $508,318.46, which would eventually be used to establish the Smithsonian Institution in Washington, D.C. Rush later became one of the first regents of the institution.[2]

After a short time with the Anti-Masonic Party, in the later 1830s Rush became a member of the Democratic Party.[3]

In 1847, Richard Rush was appointed as Minister to France by President James K. Polk. When his negotiations were interrupted by the overthrow of King Louis-Philippe, he was among the first foreign diplomats to recognize the new French Second Republic. He remained in France until his recall by the new Whig administration in 1849, when he returned to the land of his birth, to retire in Philadelphia. He died there on July 30, 1859, and is buried at Laurel Hill Cemetery in Philadelphia. Prior to his death, Rush had been the last surviving member of the Madison and Monroe Cabinets.

Rush was elected a member of the American Antiquarian Society in 1814.[4]

During the 1820s, Rush was a member of the prestigious society, Columbian Institute for the Promotion of Arts and Sciences, who counted among their members former presidents Andrew Jackson and John Quincy Adams and many prominent men of the day, including well-known representatives of the military, government service, medical and other professions.[5]

This article contains material from the U.S. Department of Justice Attorneys General of the United States, which, as a U.S. government publication, is in the public domain.