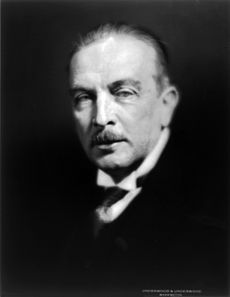 Kühlmann was born in Constantinople. From 1908 to 1914, he was councillor of the German embassy in London, and was very active in the study of all phases of contemporary political and social life in Great Britain and even in Ireland. During World War I, he was initially councillor of embassy at Constantinople. In October 1914 he founded the News Bureau which became a vehicle for German propaganda in the Ottoman Empire. This included postcards of ruined Belgian churches, which were used to appeal to the Jihadist sentiments held by those who had participated in massacres of Christians in Constantinople in 1896[1]

During the Armenian Genocide, Kühlmann was initially reluctant to expose the massacres against the Armenian population.[2] Kühlmann, who held sympathetic beliefs toward Turkish nationalism, repeatedly used the term "alleged" and excused the Turkish government for the massacres. Kühlmann, in defense of the Turkish government and the German-Turkish World War alliance, stated that the policies against the Armenians was a matter of "internal politics".[2] However, Kühlmann eventually stated that, "The destruction of the Armenians was undertaken on a massive scale. This policy of extermination will for a long time stain the name of Turkey."[2]

He was subsequently minister at The Hague, and from September 1916 until August 1917, ambassador at Constantinople.

Appointed foreign secretary in August 1917, he led the delegation that negotiated the Treaty of Brest-Litovsk, which removed the Russian Empire from World War I. He also negotiated the Peace of Bucharest of May 7, 1918, with Romania. In the treaty negotiations, Kühlmann encountered opposition from the higher command of the army, and, in particular, of Erich Ludendorff, who desired fuller territorial guarantees on Germany's eastern frontier, the establishment of a German protectorate over the Baltic States and stronger precautions against the spread of Bolshevism.

In July 1918, he delivered in the Reichstag a speech on the general situation, in the course of which he declared that the war could not be ended by arms alone, implying that it would require diplomacy to secure peace. This utterance was misinterpreted in Germany, and the higher command was drawn into the controversy which arose over it, so that Kühlmann's position became untenable. He was practically thrown over by the Chancellor, Georg von Hertling, in a speech intended to explain away his statement and, after an interview with Emperor Wilhelm II at the front, he tendered his resignation in July 1918.